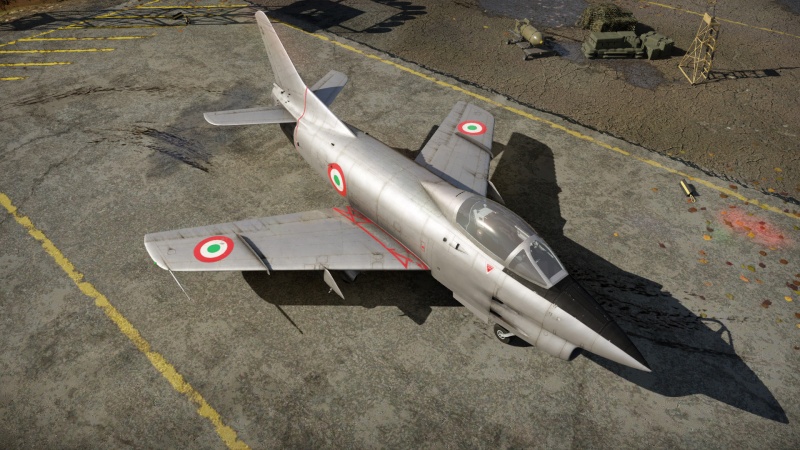 The G.91 pre-serie (nicknamed "Gina") is a rank V Italian jet fighter with a battle rating of 8.3 (AB/RB/SB). It was introduced in Update 1.69 "Regia Aeronautica" along with the initial Italian aviation tree.

A mid 50's transonic fighter (< Mach 0.98) with ground attack abilities. Very manoeuvrable, but with a light offensive armament makes the G.91 with its young age a difficult starter aircraft into the jet era. Especially as it will fly in fierce competition in the sky, facing every sub- and transonic aircraft and being smack in the middle performance wise.

There is little change between the Pre-serie, R/1, R/3 and the R/4, and this guide can be considered universal for all listed aircraft.

Although only outputting a meagre 22 kN of thrust this first look disadvantage is literally outweighed by the high thrust to weight ratio of 0.73 empty (0.41 full). This makes the Gina an excellent dogfighter as jet fighters maintain both their top speed, climb and sustained turn-rate by their engine power rather than other flight characteristics. It can easily reach its own terminal speed (1,011 km/h, 921 ft/s) and self-destruct in level flight.

Lacking in straight wings and leading wing slats the stall speed for the G.91 is quite higher than the low weight lets one assume. One should hence be wary of many older jet types with said features, as after bleeding too much speed they can easily outmanoeuvre the Gina.

At its tier there is little which cannot hurt the G.91. This is mostly due to the large calibres and fast firing weapons found in the jet age, although the Gina does not help this issue. The armour is enough to withstand the occasional tank LMG fire, but otherwise will only protect the pilot from shrapnel damage. Even though the centreline arrangement of all components proves to be quite survivable in combat, it does NOT lend itself for head-ons or prolonged chases. The former only leads to functional aircraft with a dead pilot and the latter to the reverse, which was in all likelihood the intended design in real life.

A focus should be made on the engine modules, as the G.91 lives by its T/W ratio. New boosters is a double edged sword, as without the G-Suit one is just black out earlier. This oddly makes the Bomb unlock a tantalizing choice, especially in already won matches for farming on ground units before the game ends. Airframe and cover do little, the weight savings are very minor and without them the G.91 can still easily reach top speeds and rip off its wings...

The G.91 pre-serie can be outfitted with the following ordnance:

The M3 Browning is a new weapon in the Italian arsenal at this 5th tier and compared to the previous experiences a let down. The rate of fire is phenomenal, but the small calibre and ammo size put a serious damper to the mood, that is in comparison of course. In practise and with good aim, it can easily shred four fighters. The high bullet velocity and fire rate is quite the advantage in the fast pace world of jet combat, ensuring hits in deflection shots where the lower rate of fire found in the Soviet jet fighters might have failed the pilot. Yet one will always look onto greener pastures, especially as the Gina only has four guns unlike all other Browning armed jets.

The ordnance carried by the G.91 is mediocre. It was designed as a fighter and it shows in the additional payloads. They should only be considered for a quick drop on the way to the combat zone, losing height/speed advantage in doing so, or once aerial dominance has already been established. Even then many other jets are way better suited for ground attacks.

Air superiority is the combat objective for the G.91 Gina, anything else is secondary. In team games lure enemy fighters into extensive and excessive dogfights to allow your heavier and less nimble allies to "Boom-and-Zoom" or "Boom-and-Run" them. With their great thrust to weight ratio the G.91 can maintain their energy superiority and in emergencies (such as non-existant teamplay) to disengage. Alternatively standard BnZ is considerable choice. Again the great acceleration allows for more energy expensive manoeuvres and still disengage without much worry from the target. Such follies would be deadly in many other fighters, but the Gina is hence quite forgiving. In fact too forgiving, new pilots to the jet age need to lose old habits and the G.91 does not force one's hand.

Against bombers and ground attack craft the G.91 lacks fire power and it will take considerable ammo use to compensate for this. The measly protection against defensive fire makes this a dangerous task anyway and should thusly be left for better equipped allies.

The very same can be said for ground attacks. While being able to mount air-to-ground ordnance, the payload yield is minuscule. The FFAR pods are the only worthwhile consideration, but run against the G.91's intended role of Air Superiority Fighter.

The original competition specifications called for a jet able to carry 450 kg of ordnance with an operational radius of 180 km, assuming 10 minutes over the target, with a maximum speed of at least Mach 0.95 and a takeoff distance of no more than 1100m, on unprepared or grass runways. Eight aircraft competed in the first round, including the French Dassault Etendard (then called the Mystere XXVI) and the British Folland Gnat. The Etendard, the G.91 and a Breguet design were selected for the second round beginning in late 1957. Fiat went ahead with pre-production ("pre-serie" in Italian) aircraft, with first flight in August, 1956, seven months ahead of its competitors. The crash of the first prototype due to aeroclastic vibrations in February, 1957, proved a setback, but the G.91 entered the second round as scheduled and was announced as the winner in January, 1958.

Critics said Fiat had just copied the F-86 Sabre, which it was manufacturing under license, but these claims seem unwarranted. Operational service evaluations with the Italian air force's 103 Squadron ran from February to July, 1959, leading to a West German decision to manufacture the aircraft under license.