Difference between revisions of "A6M3" 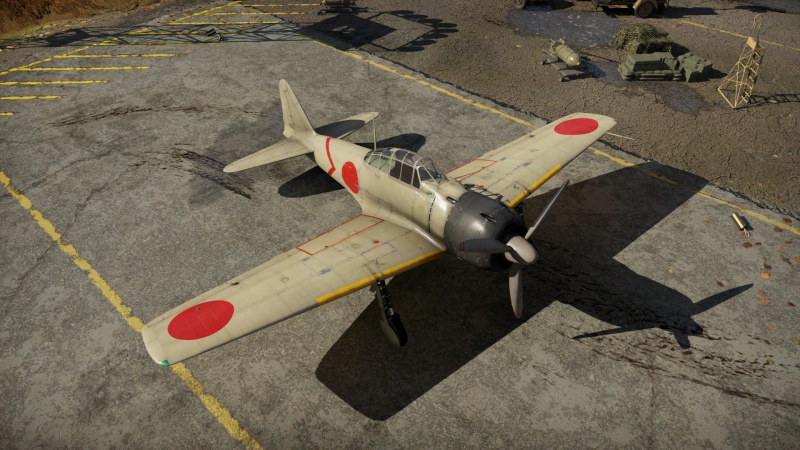 As an upgrade of the already formidable A6M2 mod. 11, the A6M3 is not to be underestimated. Its clipped wings trade off some agility for extra dive speed (~40 km/h (25 mph) more) and a slightly faster roll rate. The extra 40 km/h provides a bit more freedom of engagement and acts as a surprise element as no one expects a Zero to be able to travel at ~700 km/h without ripping. This can come in handy when facing the Soviet Yak family since they compress and eventually rip slightly earlier than the A6M3. The nimble fighter also maintains its elevator authority until rather late in a dive (around the 550-600 km/h mark) and can withstand some serious wing load (14G at a time) which allows it to pull off risky manoeuvres and surprise opponents with very tight turns which can put it on their sixes in a matter of seconds. But all of this comes at the cost of massive energy bleeding so be wary of your surroundings when pulling such stunts. All in all its best use is as a turnfighter.

The A6M3 can be outfitted with the following ordnance:

The Zero is a extremely effective dogfighter with a very tight turn. Head on engagements should not be taken with any plane, especially Americans such as the F6F and the P51, as the Zero is very fragile. Any hit can be lethal. The engine is very weak and fuel tanks can easily catch ablaze. At the start of the match, try climbing to be able to dive on unaware opponents. The plane can exceed 700 km/h allowing it to commit to very steep or long dives with slight stiffening. The biggest threats to the plane are American planes due to their potent and numerous guns, but any plane can be taken in a turn-fight victoriously.

In offence, aim to begin turn-fights with your opponents as you will outclass them, but take very careful shots. The guns are the weakest aspect of the plane and must be used with precision. Always aim for the fuel tanks or pilot as those are the most effective ways to take down enemy aircraft. Make sure to tail burning aircraft loosely as most fuel tanks are self-sealing. Bomber and other heavier planes should not be taken on as the guns are very ineffective. Only careful pilot snipes should be taken, otherwise conserve ammo for future engagements.

To defend yourself from the rear, perform a split S, which consists of rolling and turning downwards in the opposite direction, and turn to the enemy to begin engaging them. Planes will quickly overshoot and will have difficulty regaining dominance. If caught in a head-on situation, roll and dive downwards towards the enemy, make sure to have no commitment.

In April of 1942, a new A6M model fighter was launched. The main difference between the A6M3 model 32 and the A6M2 Model 21 was the new Sakae 21 engine (1130 hp), which had a two-stage supercharger making it more stable at higher altitudes and a propeller diameter of 3.05 m (150 mm greater than that of its predecessor). The engine was much heavier and longer than those used in previous models, so to prevent displacement of the center of gravity the engine was moved closer to the cockpit and the main fuel tank's capacity was reduced from 518 to 470 liters.

Also, the folding wingtips were removed, which increased the plane's dive speed limit but reduced its maneuverability and range. The latter side effect was particularly important as it made it impossible to use the A6M3 effectively during the 1942 campaign in the Solomon Islands. The 20-mm guns were replaced by Type 99-I model 3s, and their ammunition was increased to 100 rounds. Also, the aircraft could carry two 60-kg bombs.