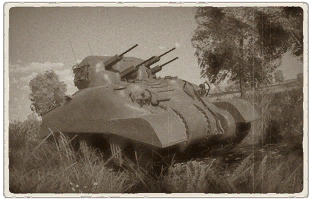 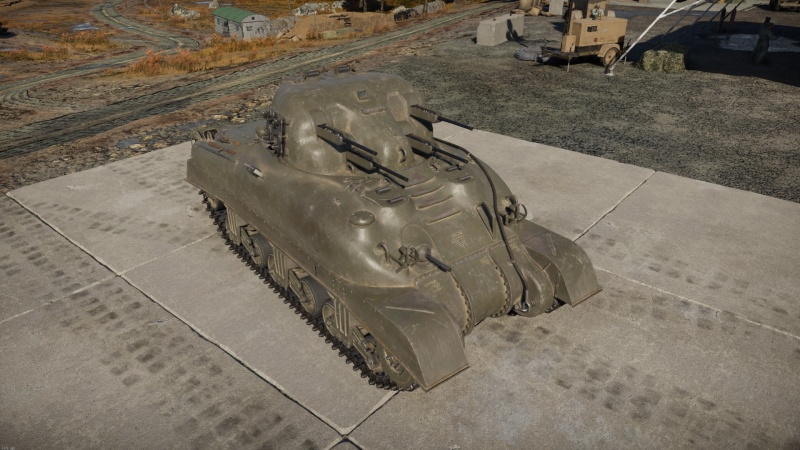 A British and Canadian project for a self-propelled anti-aircraft gun to protect their armoured force, the Skink was a step above the Crusader AA options with four 20 mm autocannons in an enclosed mount. While the Skink never got a chance to shoot down an enemy aircraft during World War II, players would have the chance to light up the skies to shoot down enemy pilots.

Overall, the Skink offers a protection similar to the Sherman. Based on the Sherman itself, only the turret offers a lower protection than its medium tank cousin. Compared to SPAAs at this rank, this will offer a much higher survivability thanks to the armour thickness close to a medium tank at this rank, since the crew is completely protected inside the tank. The roof of the tank itself is still fairly thick and can resist 12.7 mm MG rounds from above, which makes it a rather hard target for strafing aircraft. Only heavy aircraft guns, direct rocket hits, and bombs can actually destroy it.

Against ground targets, the Skink will not be that well protected. Ar this BR, most tanks will have little difficulty penetrating this level of armour even at some distance. It would not be the best choice to fight against the ground targets. The protection remains good enough against HMGs and most 20 mm guns. Some lighter vehicles might also have difficulty to penetrate the Skink. Against vehicles at a lower battle rating, the front might be protected enough to take the hit of a 75 mm or 76.2 mm gun once in a while. The side is very flat and offers just enough protection against WW2 autocannons. Any tank gun could easily penetrate the sides.

The Skink has mobility comparable to that of the M4 Sherman variants. It has average forward mobility, but a poor reverse gear.

The 20 mm Polsten cannons have a decent rate of fire, as well as a good muzzle velocity. 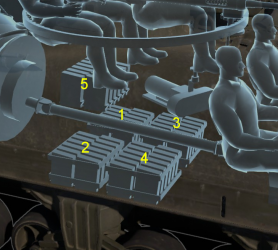 Ammo racks of the Skink

The Skink has a single hull-mounted L3A1 machine gun. Due to its low range of traverse, as well as its lackluster damage, it is useless for dealing damage to the enemy unless they are open-topped. It is best used to clear out obstacles which may block your line of sight.

The Skink's anti-air capability is very good, however, at its BR, it is inadequate for taking out most ground vehicles it faces, with the exception of light tanks and other SPAA. For shooting down enemy aircraft, be sure to let them come to you, and fire only when you are confident you can land a hit. If you spray them from too far away, most aircraft will likely avoid your general location so as to not get shot down. Make sure to not let the enemy aircraft know where you are, and surprise them with a devastating burst once they come in range.

The Skink AA tank was a series of experimental anti-aircraft tanks founded and developed by the British War Office but built in Canada. Ordered in 1944, the first 2 prototypes were ready in late 1944. One was kept in Canada and the 2nd was shipped to the United kingdom for further testing. The chassis was a Canadian-built M4A1, and development was done in partnership between Canada and the United kingdom. An additional prototype was built in 1945 with Hispano-Suiza 20 mm gun instead of Polstens like the first 2 prototypes. 8 additional Skink turrets were built but never mounted on the chassis. The 3rd prototype and 4th prototype were almost ready to be assembled and intended for the United kingdom, waiting in port to be loaded on a ship by 1945.

The development of the Skink was based on the perception by the British image of the Luftwaffe's efficiency and accuracy from early in the war. This perception still very present in 1944, and the British army used a large number of SPAAs. Many were truck based with 20 mm Polsten or Oerlikon (single or up to 4 guns) and 40 mm Bofors, to provide the ground units with close air defence against potential German close air support during the late periods of WW2. For this reason, a initial planned order of 130 Skinks was made. But as history shows, this fear was unfounded, as the German aviation was now unable to effectively support the units on the ground. The end of WW2 and the fact that the German did not have the aviation it once had anymore put an end the the Skink project.

The 2nd prototype of the Skink arrived in Lulworth where it was tested in the British armoured school. The trials went on and several minor modifications were made to polish the design. such as the replacement of the Canadian gun sight (either damaged or considered insufficient) by a naval holographic sight. Serial modifications were made such as the guns needing belt feed instead of magazine,s and the standardization of the British 21st army who requested that the guns needed to be either 20 mm Oerlikon or Polsten instead of the Hispano-Suiza as the Canadians wanted. The Polsten and Oerlikon, while being weaker than the Hispano-Suiza, was using the same ammo and was making it easier to supply whereas the Hispano-Suiza was using a different ammunition who wasn't standard in the army. This delayed the production of several months and the situation having changed in Europe, the order of 130 tanks was cancelled officially in August 1945.

The Skink sent to the UK was used in combat by various First Canadian Army units in Europe during February and Match 1945. No aircraft were encountered, but it proved a useful anti-infantry weapon.