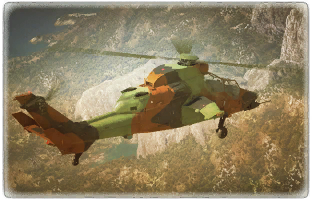 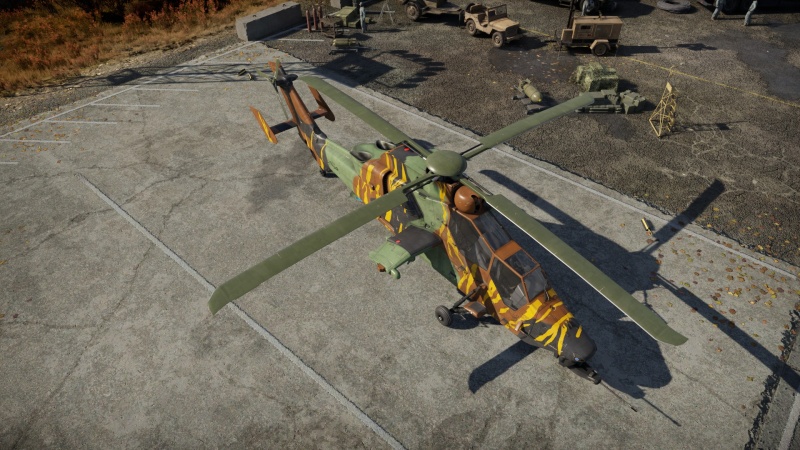 The EC-665 Tiger HAP is a premium rank VI French attack helicopter with a battle rating of 10.0 (AB/RB) and 10.3 (SB). It was introduced as a premium pack in Update 1.91 "Night Vision". It was removed from the store after the 8th Anniversary Sale, and was reintroduced in Update "Hot Tracks" as a premium vehicle purchasable with Golden Eagles

The Tiger HAP has some of the best agility and flight performance characteristics compared to other helicopters: it is able to do barrel rolls metres from the ground. Despite not having the best top speed (Russian helicopters excel at that part), it is able to perform "unique" tricks mid-air for helicopters. It is not the best strike helicopter when you want to do lightning strikes (fast attacks with the minimum exposure time) but it is able to "peek-a-boo" with enemies, specially since the collective pitch on the EC-665 can be increased and decreased really fast.

As with most helicopters in the game, it easily takes damage from even 7.62 mm machine gun fire. However, the crew is inside what looks like an "armoured bathtub". The crew is protected by AMAP-AIR (Advanced Modular Armour Plating Air) which is able to protect the crew from fragmentation only. It is not able to withstand machine gun fire without being damaged badly. However, the EC-665's best armour is to not be seen at all. This is something the Tiger excels at. Thanks to the GPS (Gunner Primary Sight) displacement, if the real life combat usage is followed (staying behind trees and mountains and poking just the rotor), the survivability of the EC-665 can be tremendously improved, thanks to this, it is not detected by anti-aircraft at all and will be hard to spot unless thermals are being used.

The EC-665 Tiger HAP can be outfitted with the following ordnance presets:

The EC-665 Tiger HAP can be considered to be the second best reliable attack helicopter when it comes to all tasks in the battlefield, the EC-665 Tiger HAD being the first. The mobility, small profile, manoeuvrability and movement capabilities while carrying full ordnance loads make this one of the best helicopters. For this same reason, the EC-665 Tiger HAP can have multiple roles depending on the map. Despite not having as much ordnance as other helicopters (Ka-50/52, AH-64, etc) it has just the right amount to make it a beast in both air-to-air and air-to-ground combat.

The HAP version has a wide variety of payloads for all types of players, for those who want to be fast and engage bases or ground targets as quickly as possible, and for those who want to carry out as much destruction as possible. The only drawback is that the helicopter is not able to carry Hellfires like the HAD. The recommended payload for a fair trade in speed, firepower, and defensive capabilities is the "Hot-3 x8, Mistral x4" payload. Enough AGMs to take out 8 ground targets and 4 AAMs to provide anti-air defence against both jets and helicopters. If aimed correctly (depending on the target and where it is aimed), only one AGM is needed per tank. If the player wants to play a more aggressive close-combat payload, then a rocket payload should be carried. More than enough rockets to destroy 11 tanks (considering you take 6 rockets per tank). In Enduring Confrontation maps, any payload is recommended as EC is more forgiving payload-wise as multiple strikes can be done to a base, ground units, and enemy helicopters.

The HOT-3 ATGM is a reliable anti-tank missile with a high penetration due to its tandem warhead. It should be noted that it is really slow and will take at least 10 seconds to arrive to target (240 m/s). This is an interesting ATGM as, since it is SACLOS guided, it will not trigger LWR compared to missiles like Hellfires. However, it is jammable by soft-kill APS such as EIREL APS (seen in AMX-30B2 BRENUS) and Shtora-1 (seen in T-90A) if spotted. 90% of the time, all the tanks engaged will not face towards the heli unless the attack is made in a 60° frontal arc LoS (Line-of-Sight). This is the biggest pro as, most of the time, T-90A will not face at you but the possibility is still there.

This can be tricky considering the flight speed and the obstacles between you and your target. However, it is not too hard to aim, it just requires practice. The main downside when firing the HOT-3 are obstacles (trees, houses, etc). They will cause big issues when it comes to the guidance. The HAP FCS (fire control system) has a laser targetting which locks into targets and follows them as long as they have a clear LoS with the GPS (gunner's primary sight). The use of this laser lock is optional. Some players decide not to use it at all as it may be easier to aim it manually, some may not. However, since the HOT-3 is a beam-rider (follows a radio-beam between the GPS and the missile) and the laser is bound to the GPS crosshair, the laser lock may lock into the HOT-3 for this reason. This is the main downside of laser lock when using SACLOS guided missiles (this does not happen with laser guided missiles such as Hellfires as the flight path is different).

When aiming to specific places of a tank to destroy it, there are many possibilities depending on your current position, enemy tank current position, type of tank and the tank itself. For example, no matter the allegiance, all SPAA will be taken out with a single HOT-3 thanks to hull-break. However this may not be the case for MBTs. A guideline is shown below:

The use of Mistral

This is one of the best AAM seen in game when it comes to "general purposes". It is able to lock and engage any target in a 6 km range from a rear-aspect lock and 4 km in all-aspects lock. This is one of the most useful missile when it comes to all anti-aircraft engagements, against helicopters and enemy jets. As expected, most of the enemy helicopters will have MAW and flares which will trigger automatically at the moment you fire a missile. When it comes to jets, this does not happen. The Mistral should be used when the enemy aircraft is flying as straight as possible as, since it needs speed to turn, any hard turn will completely evade the missile.

The development of the EC-665 Tiger started in 1984 by France and West Germany to fill the need of an anti-tank helicopter in the case of a possible Soviet tank invasion across Europe. After the collapse of the USSR and the project exceeding the funds limits, the project was reorganized, changing the Tiger from an anti-tank platform to a multi-role attack helicopter. The Tiger first entered service in 2003, and is still in use in multiple countries.

The HAP variant, standing for Hélicoptère d'Appui Protection (Support and Protection/Escort Helicopter) was one of the first variant produced, developed for the French army for air-to-air and fire support duties. It's equipped with a chin-mounted 30mm turret autocannon, and capable of carrying rockets, ATGM, gunpods and missiles.

The Tiger HAP first saw combat in Afghanistan in 2009 employed by the French army, also being the first combat use of the EC-665 Tiger. The helicopter role was as said by a French officer, "find, attack, suppress, seize, raid, and support". It also saw combat service in Libya and Mali.