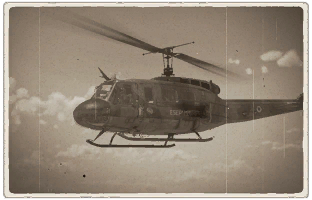 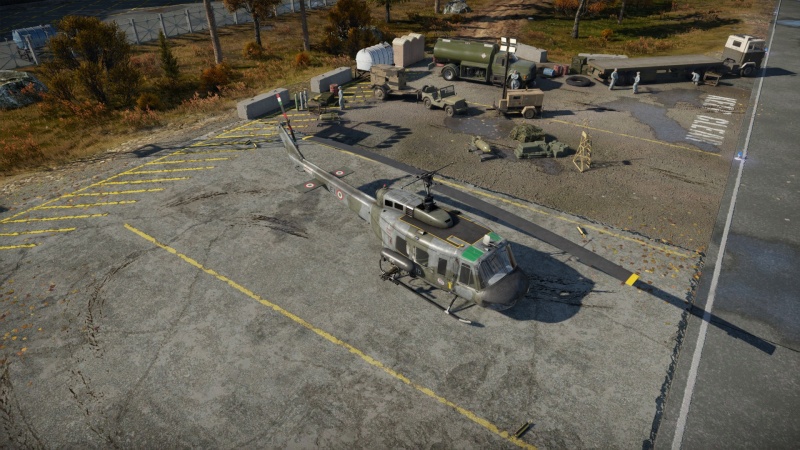 The AB 205 is not very survivable. Like many helicopters at its battle rating, it is prone to exploding into many pieces after a hit from a missile, or from a barrage of AA fire. It does have some armour on the cockpit area, but in battles that won't really protect you from anything you'll face, at most you might withstand some machine-gun fire from ground vehicles. Keep in mind that the helicopter is quite large so at times, some rounds will just go through the helicopter, and if no important modules have been hit, you should still be able to fly as normal.

The AB 205 A-1 can be outfitted with the following ordnance:

The AB 205 A-1 can be a decent helicopter for its battle rating, there are line-up options available to the player, which can be used to pair the helicopter up with.

The armament options for the AB 205 A-1 are quite light, only being able to use rockets and two miniguns at most. Even then, there are only 14 rockets available for the AB 205 A-1, so every rocket salvo needs to count! If you run out of rockets during your match (which is pretty common considering you don't have many), it is advised you return to base to get rearmed.

For Ground RB, you can actually choose to spawn first with this helicopter. As a first spawn, you should stick low to the ground, and make the most out of your speed to surprise enemies at the start of the match. Depending on what your targets are, you have a chance to easily destroy one or two ground targets at the start of the match with ease. Your rockets can be effective at destroying light tanks, and MBTs if hit at the right spot. Your miniguns sadly are not very useful against ground targets, so the best way to use them is either as anti-air, or to help teammates know where enemies are by using your miniguns as a sort of scout tactic. By doing this, you have the chance of racking up some easy assists at the early moments of the match.

If not spawning with the AB 205 A-1 first, it is recommended you bring in a light vehicle able to scout, with access to the "Air strike" modification. This will mean that once you have captured a point and scouted a vehicle, you'll be able to get into the helicopter with armed with rockets and machines guns straight away if you happen to get knocked out early. This is one of the most common strategies as if you manage to pull it off in a match that has only just started, you will likely surprise unsuspecting enemies who might think it's still to early to worry about enemy aircraft. At the same battle rating, you have access to the M113A1 (TOW), so this vehicle should be the one in which you should use to quickly get inside a helicopter.

With the AB 205 A-1, unlike other helicopters, you won't need to worry about spawn points as the only load-out on the AB 205 includes two 7.62 mm M134 minigun machine guns and fourteen SNEB type 23 rockets. You'll easily be able to pick off enemy air from a distance due to the range on your machine guns. Do keep in mind who exactly you are choosing to engage, as you'll realise soon enough that destroying a player with spawn points backed up will usually lead them to spawn in either an anti-air ground vehicle or an aircraft to counter the AB 205 A-1. In that case you'll get overwhelmed with everything you need to watch out for, which will lead you to be less effective in the CAS role for your team, and usually will end up in you being shot down.

When fighting on the Ground RB battlefield, you'll need to stay low to avoid any incoming SPAA. You'll need to do that as the AB 205 A-1 helicopter is not very armoured, so most if not all ground targets will easily make short work of you if you are not careful. Generally speaking sticking behind mountains or tree lines will suffice. Once you feel you've gotten close enough to the battlefield, it's time for you to come out, quickly find your targets, and engage. This might pose a challenge as the AB 205, as previously mentioned, doesn't have access to many rockets, so you'll need to pick your targets carefully and make sure most of your shots actually land and hit your targets.

The AB 205 machine guns are more useful against enemy air targets than ground targets. However, even so, the machine guns are the only armaments the AB 205 A-1 has against enemy aircraft, with no missiles nor countermeasures available to fight back. With the 7.62 mm caliber of the miniguns, any effective damage to an enemy aircraft needs to be done at close range, which puts the AB 205 A-1 in a high risk situation. As mentioned previously, the survivability features of the AB 205 A-1 are poor, with minimal protections against machine guns and cannon fire from air or ground targets. As such, it is recommended that you only get into the actual battlefield during the middle or end of the battle, when the tactical situation has led to most threats being either no longer present or dealt with by allies.

In Arcade Assault, you won't have to worry about going back to base to reload your weapons as they will automatically replenish once every munition has been used up. It's recommended you only bring the minigun and rocket loadout to maximize your overall effectiveness for your team.

The AB 205 in helicopter battles can be surprisingly powerful. When playing helicopter battles, your best shot at staying alive and being effective is to bring a load-out of machine-guns and rockets. The machine-guns you have access to are usually able to deal with most helicopters you'll be facing, due to many of them not being very armoured. Use this to your advantage as a quick barrage of your fast firing guns will quickly render most helicopters you'll face unable to fight back. You are also able to take out AI targets such as Artillery pieces with your machine-guns. With rockets, you'll also be able to take out ground AI targets. Usually, they will take 1 or 2 shots at minimum to destroy. Rockets are also quite effective in close range as a last ditch effort to come out on top when fighting a 1-vs-1. Try stay away from any helicopters with air-to-air missiles as you'll more than likely get destroyed, best way to maximize your efforts in this game mode is by trying and flanking the enemy side of the map and getting rid of ground targets undisturbed.

The story of the Agusta-Bell AB 205 helicopter begins in the year 1966, in which the "Costruzioni Aeronautiche Giovanni Agusta SpA" successfully managed to get an American licence production permit, allowing the Agusta company to not only modify and produce Bell 205 helicopter in Italy, but also allowed them to export the vehicle if any other countries had interest in also utilizing the helicopter. Like its American relative, the Italian version of the AB 205 differs from the AB 204 helicopter in many ways, such as having an elongated fuselage, allowing the cabin to hold up to 14 people including pilots. The main reason it was chosen was due to the success of Bell helicopters, which Italy also wanted to tap into, but mainly due to them needing to find a suitable replacement to their fleet of Agusta-Bell 204 helicopters, which they had in service at the time. It was the natural choice to go for the successor of the previous model, and since it could be produced inside Italy, it allowed for more jobs to be created and overall helped Agusta get more experience in making helicopters and earning valuable experience, which they'd utilize in future projects.

The Agusta-Bell AB 205 was equipped with an Avco-Lycoming T53 gas turbine engine, which at the time drastically increased the overall output of the helicopter. In order to compensate for the increased power of the engine, the dynamical systems of the helicopter underwent a series of structural changes. Thus, the AB 205 rotor would change to a diameter of 14.63 m, the previous model, the AB 204, only had a rotor diameter of 13.41 m. The engine allowed the Agusta-Bell 205 to reach speeds of up to 222 km/h, which really set itself apart, as it would be one of the fastest helicopters of the Huey family.

In terms of armaments, the AB 205 would use the M21/MAMEE (Meyer Ammunition Module, Emerson), which consisted of two General Electric M134 Miniguns and two external cylindrical containers containing 3,000 7.62 caliber shots each for the Miniguns. They'd also feature a pair of 70 mm M158A1 rocket launchers. It was also capable of carrying other standard armaments seen on the American versions, but there is no evidence that other armaments besides the aforementioned were fitted. Service-wise, it partook in the majority of Italian involvement in various conflicts, one of the more well-known ones being in Somalia. There, the AB 205 would join the Gruppo Squadroni ITALHELY "IBIS". The group was established at Tommaso Fabbri Airport in Viterbo, seat of the 1st Antares Regiment, on December 7th 1992. This group consisted of about 150 men (120 pilots and specialists and thirty support men) and 13 helicopters. In total there would be five squadrons (three flight and two command/support). There the AB 205 would provide critical support from the air, usually providing intel for Italian troops on the ground, and if needed, also provide CAS thanks to the armaments it had access to.