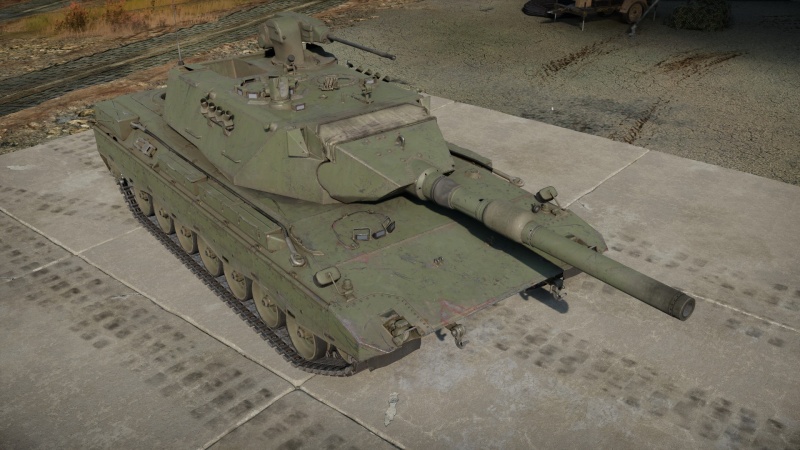 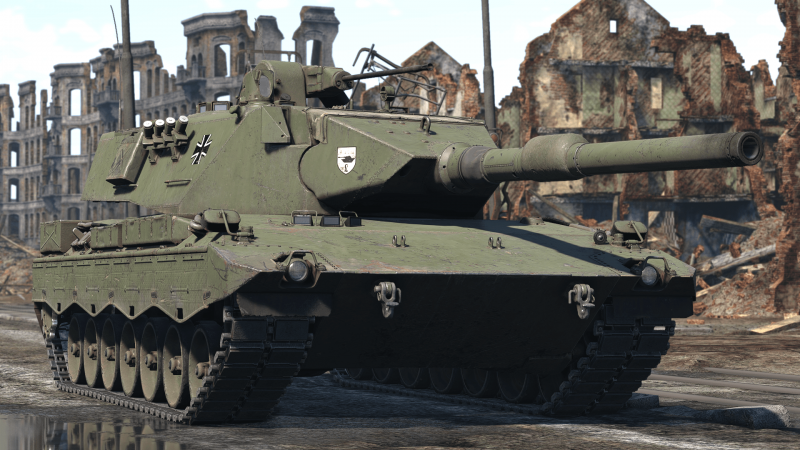 Leopard 2K
Leopard 1A5
Leopard 2A4

The Leopard 2K is a rank VI German medium tank with a battle rating of 9.7 (AB/RB/SB). It was introduced in Update 1.77 "Advancing Storm".

The mobility of the Leopard 2K is astonishing, making it one of the most agile MBTs at its BR, able to reach a speed of 70 km/h (RB) on road. 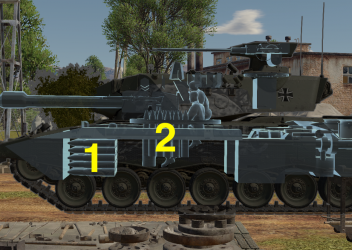 Ammo racks of the Leopard 2K

The tank has a 20 mm anti-aircraft gun situated on top of the turret which can fire over cover and be used to knock out gun barrels and tracks, light tanks, helicopters and planes. The belts are alternating HEFI-T/HVAP-T, with 57 mm of penetration at 0 degrees at 10 m. The 20 mm has quite good elevation, and rotates independently from the turret, able to surprise light tanks attempting to flank following turret ring immobilization.

As with any vehicle, the Leopard 2K finds itself at a serious disadvantage while stock. Without access to the APFSDS rounds, users will need to play more carefully. While the DM12 HEATFS round is powerful, it struggles against composite armour and ERA, as well as having lacklustre post-penetration effects. Players will have to aim more carefully to deal effective damage with the DM12 HEAT round.

The Leopard 2K is a powerful tank. The DM23 APFSDS round has adequate penetration, and it should be easy to destroy most enemy vehicles. The gun, ammo, and reload rate are comparable to other main battle tanks of the battle rating. The Leopard 2K does however struggle in some regards against top of the line tanks such as the Leopard 2A5 and M1A2 Abrams. The armour on the Leopard 2K is rather limited, only effective against autocannon fire. Additionally, the lack of thermals means that it will be difficult for Leopard 2K players to spot enemy tanks before they are spotted. The biggest advantage is the speed of the 2K.

The Leopard 2K is capable at long range, but is outclassed by many other vehicles. The cannon is powerful, but not especially so compared to its adversaries. The biggest issues the Leopard 2K will face in regards to long range engagements are the thin turret armour and lack of thermals. While the DM13 APFSDS round will fail to penetrate the turret cheeks of vehicles like the Challenger Mk.2 and T-64B, their rounds will have no such trouble with the Leopard 2K. The lack of thermals makes it difficult to scout for enemies through foliage, meaning trying to snipe is not an effective strategy against any enemies equipped with thermals, as they will almost certainly spot you first.

Although the Leopard 2K is somewhat weak when stock, it is an adequate frontline tank while spaded. The good APFSDS round and 20 mm give it a strong position in the German high tier lineup. However, Leopard 2K tank commanders should play to mitigate their disadvantages in thin armour and lack of thermals. The Leopard 2K does best in close to medium range fights.

In the 1960s, Germany and the United States were jointly-developing the MBT-70, and Germany was contractually prevented from developing any new MBTs independently until the joint project with the US was completed.

But development problems plagued the MBT-70 project, and it appeared that the vehicle would not be finished within an acceptable time frame—so Germany found a way to bypass contractual limitations for the MBT-70 development.

Instead of ordering the development of a new tank, the German government issued an order to the Porsche company to research ways to improve the Leopard I tank already in service with the German army. This enabled Germany to research a more advanced fighting vehicle without breaching the contract signed with the US.

Porsche's first study of the Leopard I revealed a lot of room for improvement, and second study focusing on upgrading the Leopard I to match the MBT-70's firepower was launched almost immediately. This eventually resulted in the construction of two prototype vehicles—one in 1969 and one in 1970—nicknamed Keiler (tusker).

In the early 1970s, Germany was able to back out of the MBT-70 project due to spiraling development costs. Instead, they continued work on the development of the Keiler, which was renamed to Leopard 2.

To get the most out of their prototypes, German engineers equipped each one with different components to determine what worked best. Some Leopard 2 versions were equipped with a 105 mm smoothbore cannon, whereas others were fitted with 120 mm smoothbore cannons. Some prototypes received a hydraulic suspension while others didn't, and there was even a version equipped with the 20 mm anti-air mount on the turret (similar to the one found on the Kpz-70).

Sixteen out of seventeen Leopard 2 prototypes were built and tested, yielding many refinements to the Leopard 2 design. Subsequent models further increased the Leopard 2's capabilities, with each variant making it more powerful—and ultimately into the Leopard 2 known today.