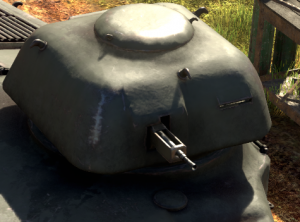 The MAC mle 1931 machine gun was a gas operated weapon chambered in 7.5 mm MAS. A distinct feature on the gun was the strange pistol grip and the side mounted 150 round drum. It could even be used as a SAW (squad automatic weapon) fitted with a 35 round box magazine and fitted to a tripod. It fires 450 rounds per minute which quickly overheats the barrel. It was even in French army protocol to dip the gun's barrel into a barrel of water to cool it down in case of emergency. It was used mainly as a tank MG and as a twin-mounted fortification weapon in the Maginot line. Its service started from World War 2 and ran all the way to the Chadian Civil War in 1965 where it fell out of use when the war ended in 1979.