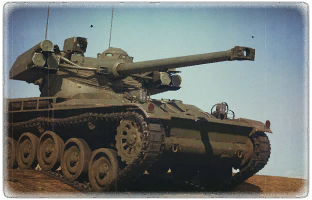 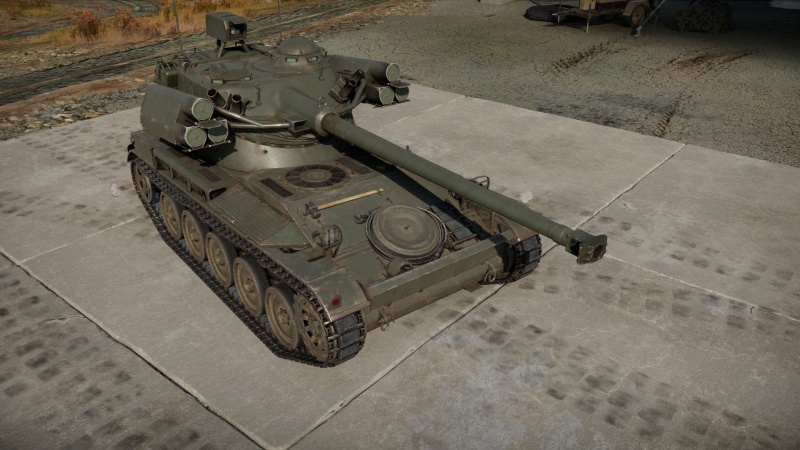 At its current battle rating, the AMX-13 (HOT) can definitely do some serious damage, even to top-rank MBTs and (as of 1.81) helicopters too. The six HOT ATGMs are enough to penetrate almost any conventional armour on direct hit, and may even penetrate the T-64B's upper glacis with ERA in place if hit it directly, though strong NERA screen might be too much for it. All six missiles can be fired in short succession, although only the one fired last can be controlled.

This makes it a viable tank destroyer, but, unlike any of the MBTs, it cannot take a hit and survive. Even certain machine guns and aircraft cannons are capable of destroying it easily. Use its spotting ability to alert your team to enemies, and try to guide ATGM into a critical spot, like crew or ammo, since ATGM can overpenetrate.

Just remember: AMX-13s only have six ATGMs, after that, it is using a conventional gun, firing solid shot AP, which technically can ammo rack tanks like T-64 and T-80 from the side, but it's not a guaranteed kill. 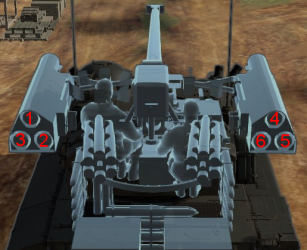 The AMX-13 HOT cannot be played as the standard AMX-13 due to the increased battle rating. This particular modification should be used always as a support vehicle. The commander should always keep this in mind:

It should be noted that the AMX-13 HOT can face Leopard 1s, meaning the main gun is capable of destroying the tank from all sides. Enemy targets like T-54/55 will only be able to be penetrated frontally with the ATGM and from the sides with the 75 mm gun. The T-55AM-1 can be one of the toughest enemies it will face as the ATGM will not be able to penetrate the turret mantlet when seen directly from the front, aim for centre-mass with the ATGM.

Do not stay alone with this tank unless you are being a scout vehicle (as it has that capacity).

The AMX-13 should be played as a flanker or as a "medic" vehicle thanks to being able to repair friendlies due to being a light tank. It should be noted that the ATGM use is reduced considerably when in urban combat due to the way the launchers are placed. Use your mobility, scouting capabilities and autoloader to mark, disable and support allies in killing enemy vehicles. When facing Russian tanks, always try to get side shots. When facing NATO tanks (excluding heavy tanks and WW2 tanks), side shots might not be required depending on the armour the AMX-13 is facing.

The AMX-13 should be played as a scout or as an ATGM sniper. Be aware of your zoom sights as the AMX-13 lacks potent zoom. Use ATGMs when engaging far targets as your main gun will lose penetration at ranges longer than 300 m, reducing spalling or not penetrating enemy armour at all. Use your scout ability to mark targets for teammates and let them engage them. Using your speed, you are able to flank the enemy as you are able to cross the map side to side with relative ease and speed.

The gasoline engine produced 250 horsepower, and the manual transmission had five forward and one reverse gear. The suspension was of the torsion bar type. The drive sprockets were in the front, return rollers in the back, and there were five road wheels and four return rollers. The AMX-13 could reach a speed of 60 km/h, and it had a range of 400 km.

The AMX-13 HOT was a prototype made by AMX featuring HOT launchers and ATGM as an intent to upgrade the AMX-13 SS.11

Vehicles equipped with the same missile