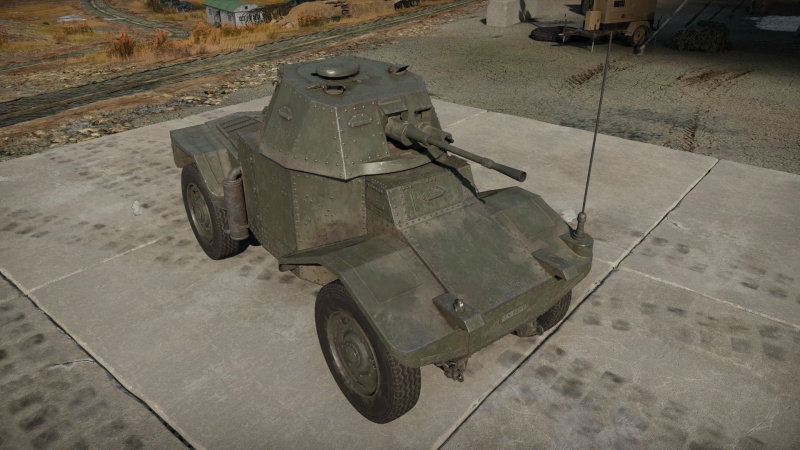 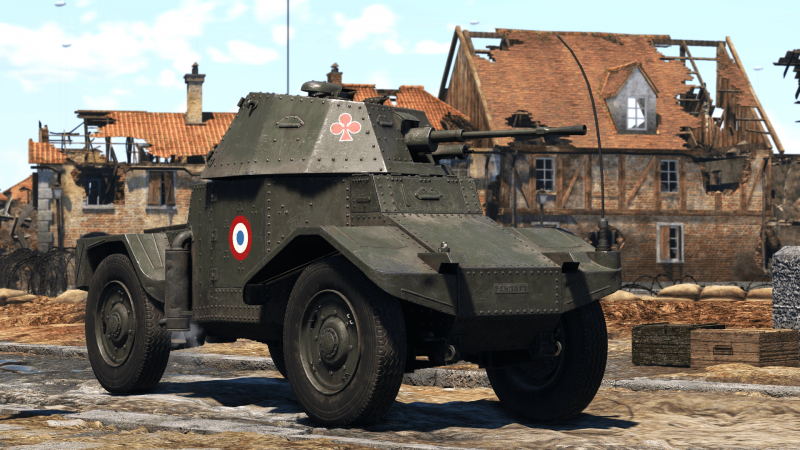 The AMD.35 is a rank I French light tank with a battle rating of 1.0 (AB/RB/SB). It was introduced in Update 1.93 "Shark Attack", replacing the AMC.34 YR as a reserve vehicle for the nation.

The AMD.35's armour thickness is similar to other French rank I armoured cars.

The penetration capability is acceptable, but the post-penetration damage, because of the shell type (only APC), is very light. You will have to shoot multiple times in order to destroy an enemy tank. 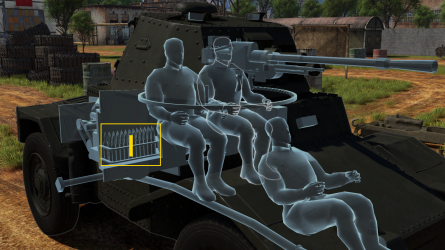 Ammo racks of the AMD.35

The AMD.35 is equipped with a single coaxial MAC 31 installed in a separate mantlet to the left of the main gun. It is loaded with 800 rounds organised in AP/AP/T belts, with a maximum 10 mm of penetration and a decent fire-rate and velocity. It is loaded with a pan magazine loaded with 150 rounds (100 AP and 50 T) per magazine. The machine gun is able to provide continuous fire for around 6.5 seconds before having to be reloaded, taking 6 seconds with a stock crew.

The AMD.35 is best thought of as an armoured car with a great gun. Although it has poor armour protection, like most armoured cars, it is mobile, lethal, and surprisingly survivable.

Its gun is a 25 mm cannon with high penetration values. This weapon will have no problem dealing with the vast majority of enemies at this tier. Just try to stay under 300 m of range, or else there may be significant deviation in the rounds. However be aware that the post-penetration damage is quite small so it is advisable to aim for the breech or the gunner first.

This vehicle is unlike most ground vehicles in the game in that it is wheeled. Because of this, it has a great speed advantage on roads and paved surfaces. However, it has poor mobility on soft terrain, and struggles to go uphill. Even when driving on roads, quick turns cause the vehicle to lose much speed. Finally, the AMD.35 has quite ineffective brakes when stock. It is recommended that the tanker use the AMD.35's great on-road speed to quickly attain a firing position at the beginning of a match, and move quickly around the map to avoid detection. If a good firing position is found, then the AMD.35 will be able to utilise its powerful cannon to great effect.

Most vehicles at this tier are poorly armoured, and this one is no exception. However, with 4 crew members it is actually quite survivable, and can usually take a few hits before being destroyed. Still, it is always best to avoid taking fire if possible, and in that regard, the AMD.35's high top speed will be a boon.

The AMD.35 or Automitrailleuse de Découverte, also known as the Panhard 178 was a French 4x4 specialised long-range armoured reconnaissance car built by Panhard. Designed to a 1931 specification to replace older models of armoured cars, Panhard completed a prototype in October of 1933 which was evaluated in January and February of 1934. Out of four competing models, built by Panhard, Renault, Berliet and Latil, the Panhard design was considered the best, being a highly advanced design for its time. After further trials by the French Cavalry, the Panhard 178 was accepted for production as the AMD Panhard Modèle 1935. Initial use revealed some issues like engine overheating and cracking of the gun sight, resulting in a major modification program in 1937 which saw numerous modifications introduced.

In order to obtain a vehicle capable of a long-range and relatively high speed for its class, Panhard designed the 178 to be relatively light. As a result, the vehicle was relatively lightly armoured, ranging from 7 mm armour bottom plates to 13 mm flank armour and 26 mm frontal armour. As a result, the vehicle had a road speed of 72 km/h (45 mph) and a range of about 300 km (186 miles), but due to its long wheelbase and leaf-spring suspension, its off-road top speed lay at 42 km/h (26 mph) and its wading and trench-crossing capacity lay at just 60 cm (2 ft). The vehicle also had its shortcomings: it had a cramped interior, poor cross-country performance, a slow turret rotation speed and a weak clutch.

Unusually for a French light reconnaissance vehicle, the Panhard 178 was equipped with a 2-man turret at a time when even most of their tanks had one-man turrets: the AP3X turret housed a commander and gunner, who had a 25 mm Hotchkiss Modèle 34 main gun and 7.5 mm Reibel coaxial machine gun at their disposal. The turret also housed a reserve machine gun which could be mounted on top for anti-aircraft defence, but which was rarely mounted in practice. The Hotchkiss gun had tungsten rounds at its disposal, capable of penetrating up to 50 mm of armour, however, these rounds performed poorly when confronted with angled armour. Already early on the poor armour-penetrating capabilities of the Hotchkiss Modèle 34 were recognised, and work was started on up-arming the AMD.35 with a 47 mm SA 35 gun. Early designs would have seen the gun fitted in the rear driver's post creating a tank-destroyer with two AT guns (the turreted Hotchkiss gun and a hull-mounted SA 35 gun), but this was abandoned in favour of a vehicle with a turreted SA 35 in an enlarged turret. Even so, by May of 1940, in the response of events in Poland, plans were already being drawn up to phase out production of the lightly armoured AMD.35 in favour of the more heavily armed and armoured AM40P.

Events decided differently, and following the German invasion of France in May of 1940, the AMD.35 proved its worth, outclassing its German counterparts. In a number of direct confrontation, German reconnaissance vehicles proved vulnerable to the Panhard's Hotchkiss gun, while their own 20 mm main gun proved ineffective against the Panhard. As a result, following the defeat of France, the Panhard 178 was taken into production for the German army as the Panzerspähwagen P204 (f). In German service, some of these vehicles were refitted with the 37 mm KwK36; in 1944, a batch of captured ex-Vichy Panhards were fitted with the 50 mm KwK38 L/42 or L/60 in an open turret.

Following the Liberation of France in 1944, production of the Panhard 178 was reinstated for the French Army, and consideration was given to up-arming the design with the 75 mm SA 45 L/32. A larger turret was designed which could fit this gun, however, before production started the decision was taken to fit the new Panhard 178B with the pre-war 47 mm SA 35 instead. The up-armed Panhard 178B was produced for the French Army, entering service after the War: it served both in France and its colonies, such as Syria, Tahiti, Madagascar and Indo-China. The Panhard 178B was phased out of French army service in 1960; examples taken over by Syria following its independence in 1946 continued service into the mid-1960, when it was finally phased out in favour of Soviet-supplied equipment.