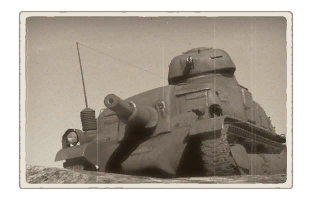 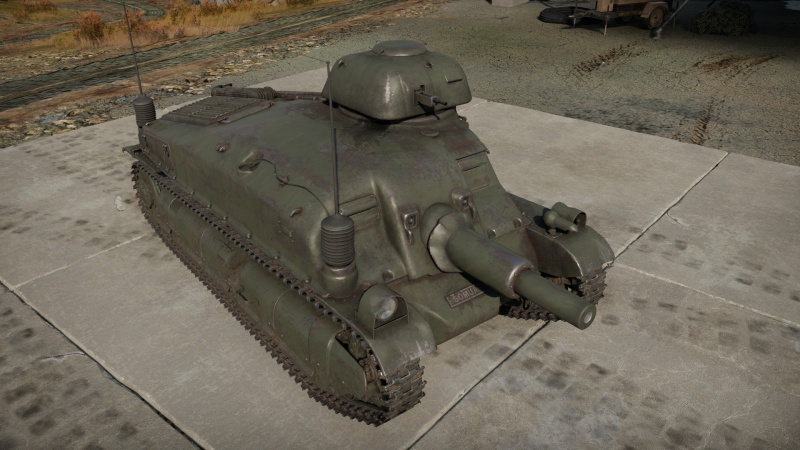 The Canon Automoteur DE 75 mm SAu 40 (75 mm Self-Propelled Gun SAu 40) is a rank II French tank destroyer with a battle rating of 1.7 (AB/RB/SB). It was introduced in Update 1.75 "La Résistance". It distinguishes itself by its very tall cupola and thick gun barrel. This tank is equipped with APHE rounds, a rare feature in the French tech tree.

As it was developed from the French S.35, this tank shares many of its characteristics such as the ~40 mm thick cast hull bolted onto the chassis, which is barely a widened version of its original. The track system is mostly the same as on the S.35, with 25 mm plates covering the roller wheels. As for the hull, it's a widened variant of the S.35's hull with two 8 mm grilles over the engine compartment and doors on the side.

As this tank is based off the S.35, it shares many of its attributes when it comes to armour. A slight angle can defeat most shots this tank will take at this BR, this is useful to know when getting into position: from a distance and not showing neither side nor front to the enemy, you should be safe. As for frontal armour, its 40 mm overall thickness is not strong enough to withstand anything bigger than AA fire. But, a thing to consider with this weird pattern is its "bouncy" behaviour, principally around the gun mantlet: complex angles may just bounce some shots, making them loose some energy before hitting the main armour, this feature is peculiarly distinctive at gun's height.

The main weakness of this tank is its very tall MG turret, which makes it quite easy to spot and destroy, as it is thinner than the main armour. Any APHE penetrating this area will knock out the tank's commander, thus disabling its only MG and some shrapnels may even damage or incapacitate the driver, disabling this tank for good. A way to avoid getting spotted too easily is buying camouflage for the front cupola area, making it look more like a bush popping out a hill than a tank's turret. Try to hide the tank's lower hull part as it is only 34 mm thick.

While being mounted on a widened S.35 hull, the heavier SAu 40 has the same engine as its predecessor, making it quite slow and unwieldy, with a very low power-to-weight ratio. In order to fulfill the task of getting into position, one should choose their route wisely and avoid risky spots as this SPG's terrible reverse speed makes it quite bad at hasty retreats. Mobility with the SAu 40 is an issue. It is arguably what makes this tank hard to master as it does not allow for good map placement. One positive of this tank's mobility, however, is that it has a decent hull traverse because of the ability to use both tracks when turning in place.

As any casemate SPG, this tank's main feature is its main gun, it is also one of the rare French tanks firing APHE shells. However, the cannon has an average penetration power for its BR. And the APHE round fails to explode when targeting enemies' sides, as the round has a rather high fuze sensitivity. Another concern is its slow horizontal traverse, which makes it hard to react to fast-paced combat situations. The gun placement makes this tank quite vulnerable: being low, it exposes the SAu 40 to enemy fire when popping up a hill. 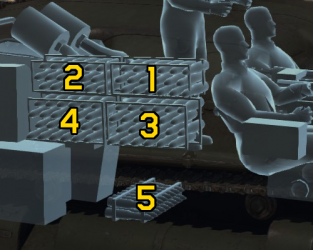 Ammo racks of the SAu 40

The small calibre of the MAC 31 machine gun makes it largely ineffective against all armoured vehicles but the ones with an open compartment. It still can be used to ping targets as a rangefinding help or to mow down minor obstacles blocking your line of sight. The turret is slow, which also negates the possibility of tracking low-flying aircraft with it.

The SAu 40 behaves as a classical casemate SPG as it should provide its teammates with superior firepower from medium to far distance, behind the frontlines where it will be harder to flank. As this is its purposed role, this tank has some issues accomplishing it. The first being its relatively low penetration and shell velocity, which makes long range engagements (>750 m)a bit hard to manage. The second being bad mobility, which complicates the task of positioning.

Act as a classical SPG while keeping in mind your slow pace. There is nothing very much interesting nor special you can do with this tank.

The SAu 40 self-propelled gun was developed by the SOMUA company between 1935 and 1937 as part of the same order the French cavalry placed for the S35 tank.

The two tanks combined were intended to equip light mechanized divisions of the French army and support the larger "battle tanks" (chars de bataille). The vehicle inherited the S35's characteristic chassis with a redesigned front section of the hull to accommodate the 75 mm APX cannon. In addition, the rotating turret on top of the fighting compartment was redesigned to a commander's cupola and moved to the side of the vehicle, but the turret's 47 mm cannon was replaced with a single 7.5 mm machine gun.

The body of the SAu 40 was ready by 1937, but it couldn't be immediately completed. Because the cannon was not yet ready to be installed on the chassis, SOMUA engineers had to wait nearly 2 years before the cannon was finally made available. It wasn't until 1939 that the fully assembled prototype was completed, and orders for mass production were received in October of the same year.

Whether or not any additional vehicles other than the prototype were built or if the vehicle took part in active fighting is unknown.

Vehicles equipped with a similiar chassis