From War Thunder Wiki
Jump to: navigation, search
B1 ter 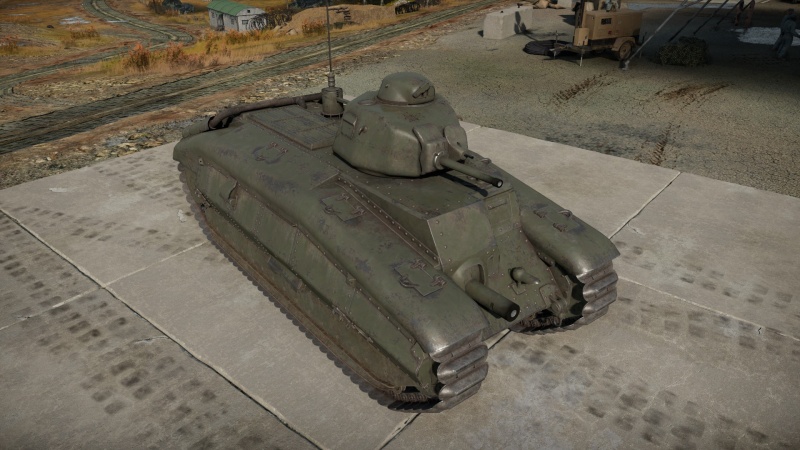 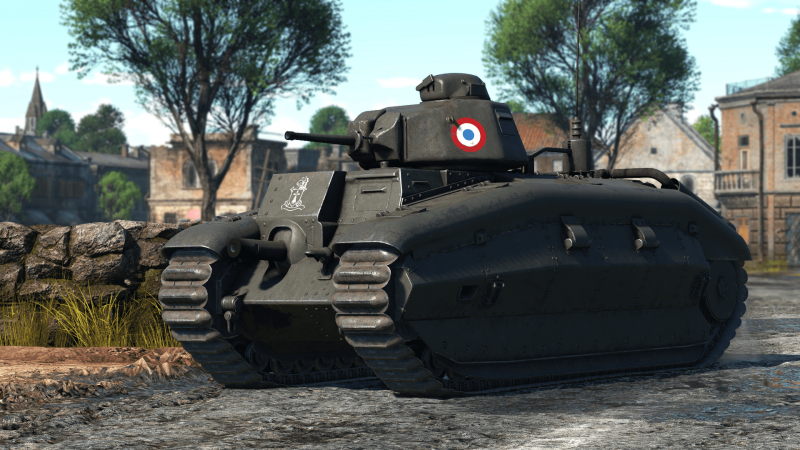 The Char de bataille B1 ter (Battle tank B1 "tertiaire") is a premium rank II French heavy tank with a battle rating of 2.7 (AB/RB/SB). It was introduced in Update 1.75 "La Résistance" as a premium pack vehicle and eventually discontinued from the store after War Thunder's 6th Anniversary sale, but was later reintroduced for War Thunder's 7th anniversary as a premium purchasable in-game for Golden Eagles

. It has also been obtainable several times through the Warbond shop since January 2020.

In order to effectively use this tank's armour, there are a few things to consider. First of all, there are some shot traps, most noticeably the turret ring and the hull gun mount. In order to minimize your enemies' chance to hit these weak spots, stay away from them. Second, even if your armour is very strong for the BR, do not completely rely on it by sitting around in an open field: you will eventually get hit where it hurts. The third thing to consider is your small and thick turret: hide that big clumsy hull behind a hill and pop out only your hard "head", take a shot, fall back, reload, repeat. If something goes wrong (i.e. getting shot in the turret ring), there is usually enough men left to take the job left by their knocked out crew. Do not bother getting spotted: it is your job to stay in the enemies' sights while your lighter teammates do what they ought to. In some situations, it can even be used as a breakthrough tank, rely on your own experience to guess when it is time to do so.

With the same gun as most other rank 2 French tanks, the B1 ter will never be recognized for having a fearsome armament: penetration rates are even lower than most reserve tanks while reload time is twice as long (a known feature of early French tanks). The turreted armament is only good at firing light targets such as SPGs and light tanks. Elevation and depression angles are amazing but turret slewing rate is a bit slow: this tank has been designed to be hull-down. As for the hull-mounted gun, it should only be used as a close range defence device, as it has poor penetration rates and high drop. Exposing your hull-mounted gun for long range engagements does not only makes you vulnerable, it is also mostly ineffective.

The B1 ter has arguably the best armour at its BR. Being an up-armoured model of the previous B1 bis, the ter model features thicker hull armour, especially on the side. Now the hull will be completely immune to the PzGr.40 belt of Pz.II light tanks which is a common opponent. There are also improvements such as a smaller turret ring, refined frontal hull, a large mudguard, etc. While angling the hull at ~40°, the B1 ter can be extremely hard to destroy for vehicles at the same BR and can even resist uptier tanks like the Pz.IV F2. Due to the extremely heavy frontal armour, one should try to use mobility to flank the B1 ter. However, if that isn't possible, you'll want to try and hit the turret ring. It may be a tricky shot, but there's only ~40 mm of armour there. When flanking, it is preferable to go for the right side of the tank as is is filled with ammo and fuel.

The primary weapon of the B1 ter is the 47 mm cannon inside the turret. Although small in calibre, it can still be very effective in medium/close-range engagements. Its penetration of ~60 mm allows the B1 to easily penetrate common foes such as Pz.IV C and T-50. The post-penetration effect, just like every other solid shot, is not destructive and requires the player to target for crew compartments. At longer distances, however, the 47 mm gun will start to struggle. The shell drop makes targeting quite challenging, and the drastically decreased penetration means that one might not even penetrate the hull side of a Pz.IV. This cannon is also slightly limited by the turret's slow traverse speed.

The 47 mm cannon has a vertical stabiliser which can significantly increase its ability to target & fire on the move, making it harder for the opponents to aim carefully. The cannon also has an amazing -18° gun depression which is more than enough for any type of terrain.

The Char B1, upon playing it for the first time will be slow in both acceleration, max speed and turret rotation speed. The Hull gun is usable, while not being very suitable for this tank's main role. The best way to play the B1 ter is to hold down a position, preferably hull down (as its turret is thick and small, it will ricochet most shots it will take). Playing the B1 ter rightly, there are only 3 ways to get outplayed:

The Char B1 was one of the most produced and widely used indigenous French tank designs employed during the Invasion of France in 1940. The Char B1 came in three modifications, with the ter modification marking the third and final one. Each modification brought with it several changes that would improve the design's overall performance, from the installation of more powerful engines, over enhanced armour protection and anti-tank capabilities to increased ammunition count. Although the Char B1's development began as early as the mid 1920s, the B1 ter version was conceived around the same time the Char B1 bis entered serial production, in 1937.

Compared to the B1 bis, the ter modification featured thicker frontal armour protection, going up to 75 mm. Apart of the extra armour, the B1 ter was also equipped with a more powerful 350 hp engine as well as a different transmission and received space for an additional crew member too. These changes increased the weight of the vehicle up to 36.6 tonnes, but also made the planned production process a lot easier, faster and most importantly, cheaper. The first prototype of the Char B1 ter was constructed and shown off to French military officials in 1937, with testing and production approval following in May 1940. However, at that point, it was a case of too little too late for the Char B1 ter. Three further prototypes were constructed before France capitulated in June 1940, with efforts to evacuate the prototypes from France ultimately failing, as the ship transporting the vehicles was sunk by a German air raid on 21 June 1940.