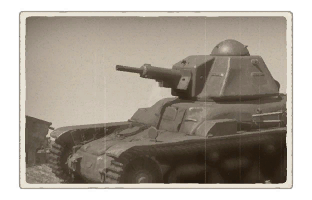 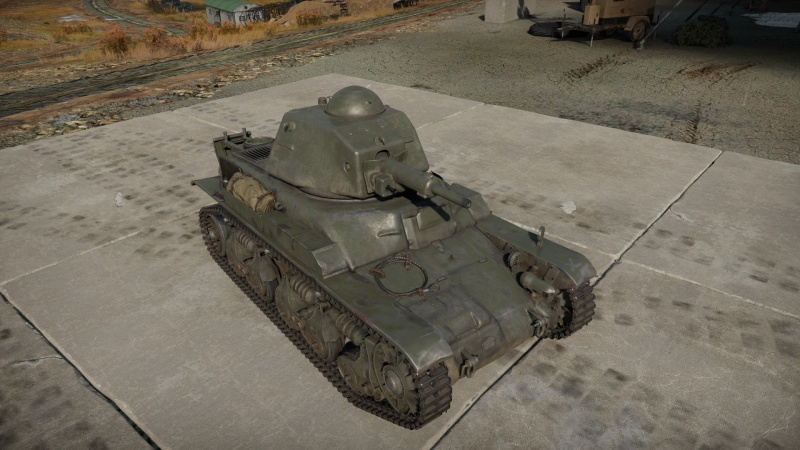 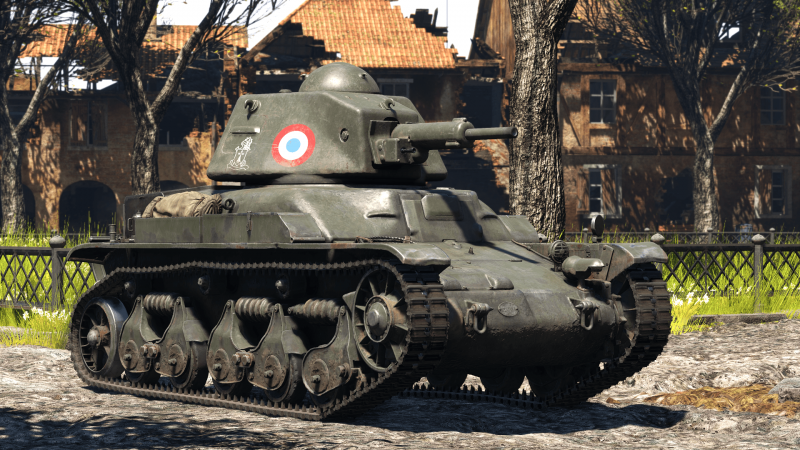 Although it is a light tank, the R.35 feels pretty cumbersome in every way: poor mobility, slow traverse speed and long reload time. It actually feels more like an heavy tank without the benefits of heavy armour. This tank's design is very similar to other French rank I light tanks. Hence, players should already be used to their shortcomings.

With good armour thickness and surprising hull angles, this tank can take some beating at a distance, provided you do not get a lucky shot in the turret ring or that you face a heavy-hitting gun. This should get you into effective combat ranges (500 - m) in relative safety. The most obvious weakspot is its turret flat left side, which is only 45 mm thick and badly angled, this makes hull-down position ineffective.

With its heavy side armour, one should use angles at its advantages and angle it at about 35° while facing opponents. Such an angling gives about 60 mm of effective thickness for 80% of the exposed area.

In an ambush position, this tank could face its opponents backwards (engine deck first). This unusual tactic could confuse enemies for a moment and provide extra protection as your engine may absorb shots. This will also decrease the chances of a lucky penetration : if turret is facing enemy, almost 90% of exposed surfaces have ~60 + mm of LoS thickness. If danger gets too high, you could give it the gas and "fly" away in forward motion.

The mobility is the R.35 (SA38)'s biggest weakness: while it does not like long-range engagements and needs to close-up with its foes in order to damage them, its very low speed will always leave it far behind its allies. With its narrow tracks and poor power ratio (8.09 HP/ton), the R.35 (SA38) hates being taken out in the mud as its speeds fall drastically. 20 km/h forward and -3 km/h backwards is all you'll get from this struggling 73 HP engine. Plan your moves in advance and do not stay too near to the front line as a successful retreat is hard to achieve with such a slow tank.

The 37 mm SA38 cannon has significantly better penetration and post-penetration damage than its predecessor, but has a longer reload rate than its peers. Know the layout of enemy vehicles well, target their gunners first or immobilize them by shooting at the engine, and make every shot count. Avoid exchanging shots at long distances as your gun's penetration values decrease heavily beyond 500 m. The turret traverse speed is also an issue since you'll not be able to react in time to flanking opponents. 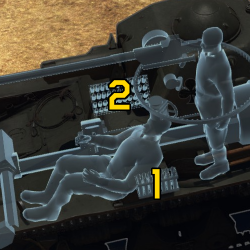 The R.35 is a decent light tank for its battle rating, so long as it is played with the right tactics. The most important aspect of R.35 gameplay is armour angling. Being that the side armour is actually thicker than the front armour, angling at 45 degrees or more is ideal. The tank is not particularly quick, so flanking is generally difficult, so sticking with your team is the best strategy. Generally, medium range engagements are ideal.

The R.35 is capable at close range, although the slow reload can cause issues. The armour if angled correctly may bounce enemy rounds even at point blank range, however the R.35 must disable the enemy tank with the first shot. Most enemies that the R.35 will face have a faster reload, and may be able to outmanoeuvre it, as the R.35 is somewhat slow. This means that getting too close to the enemy is a mistake, always maintain some distance with quick enemies.

The R.35 will struggle to deal damage at long range, the cannon having mediocre penetration and reload. However staying at range can also be a good strategy, as enemies may struggle to penetrate the armour of the R.35 as well.

Some notable enemies include: any German vehicles that use 20 mm autocannons, these include Panzer II and Flankpanzer tanks. Their autocannons will easily destroy the R.35 if the armour is not angled. Additionally, the R.35 struggles to penetrate Panzer II tanks.

Additionally, the R.35 will be easily penetrated by enemy vehicles equipped with the American 37 mm M3 cannon, the British QF 2-pounder gun, or the Swedish 37 mm kan m/38 gun.

The Char Leger mle 1935 Renault (Renault Light Tank model 1935), armed with the SA 18 short 37 mm gun, was the most common French tank at the onset of the war in Europe, with 900 on active service in infantry tank battalions in May, 1940. However, like its competitor H.35, its gun was known to be unsatisfactory as an anti-tank weapon.

Only a few of these R.35s could be converted to the improved SA 38 main gun prior to the fall of France, with the H.35s and H.39s of the cavalry receiving priority. It is known the 1st (Free) Polish Tank Regiment in France near Paris did receive some converted R.35s in May, 1940. These upgunned R.35 tanks are sometimes referred to (erroneously) as the R.39.

Concurrently, in 1939, AMX had developed a new type of track and suspension for the R.35, which had continued to be produced. This new variant, also armed with the SA 38, and sometimes designated the R.40, had gone into production in March, 1940. It saw limited service, but it is known the 40th and 48th tank battalions had received 30 each, and the 1st Polish as many as another 25, in time to serve in the invasion and fall of France. Some of these were still around to be seized by French Resistance forces during the fall of Paris in 1944.