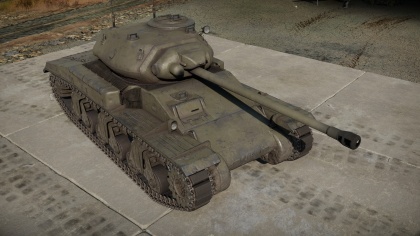 The AC IV Thunderbolt's armour have a high tendency to bounce shells. This is obvious with the extreme slope on the from of the tank, and turret design. The armour itself is not think, but due to the angle it is put at this tank is very fierce competition.

Australia began designing a tank in November 1940 as the AC I, and was intended to be a cruiser tank weighing between 16 to 20 tons with a 2-pounder gun. With no prior experience in producing a domestic tank, Australia sent a task force to the United States to study the M3 Medium design to understand the in-and-outs of a tank. They also received the aid of Colonel W.D. Watson MC in December 1940 from Britain, who has many years of tank designing experience. The overall mission ended up having the tank design to have a similar concept as the Canadian Ram tank, being based off the the M3 Medium chassis and mated with a domestic design of their choice for the upper part. The Australian attached the chassis with a hull and turret with design similarities to the British Crusader tanks. The design started to become less of a cruiser tank and more of a medium tank by American specifications due to the attempt to up-armour and up-gun the tank to keep up with German armour development.

The first design was completed in February 1942 as the Cruiser Tank Mark 1 (AC I) and designated the "Sentinel". The design was simplified by using existing parts of current tanks and using a cast hull and turret. Though originally specified for a 2-pounder, it was then asked for a 6-pounder armament. Two Vickers machine gun were used as the coaxial and hull machine gun. With the power of three Cadillac V8 Petrol engines. It was unorthodox, but powerful enough to propel the vehicle. 65 of these tanks were made by June 1943 before being succeeded by a more advanced design known as AC III, also known as the "Thunderbolt". It had better armour and an improved firepower in the form of the 25-pounder howitzer. Despite the bigger gun, the 54-inch turret ring was never expanded to accommodate for the gun's larger size, so the crew experienced a slightly cramped turret interior for the benefit of having a better high-explosive charge and armour-piercing capability. Other differences in the design was the removal of the hull machine gun and a different set-up of the three Cadillac engines. One pilot model was built and plans were made for a production for 25 tanks for further trials, but the program was terminated.

Another attempt was made to increase Australian tank firepower with the AC IV design. It first started when the designers check to see if the turret could mount the massive 17-pounder in use by the British to fight the heavier and more protected German tanks. When the tests proved successful, the 17-pounder was chosen to be the gun for the AC IV, with a new and larger turret and 70-inch turret ring to improve crew comfort. These tanks were only made for evaluation purposes only and were never mass-produced for equipping the armoured units.