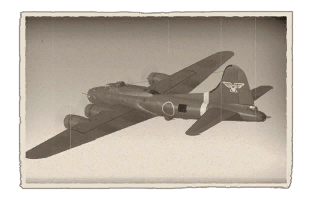 The B-17E Flying Fortress, as the name suggests, is intended to be used as a high-altitude level bomber, designed to target enemy airfields, military bases, factories, and other infrastructure crucial to winning the war. Despite its large bomb-load, it is not recommended to target moving ground targets, such as tank formations, unless they are the only targets. This is because of the inaccuracy of the bombs at such high altitude, and since columns will simply disperse when they sight bombs falling. When using the B-17E, it is always best to group up with others in a wedge-like formation for optimal defense against air targets and climb to an altitude of, at least, 4,000 m. A few fighter escorts, would ensure the survival of friendly bombers, only if they adopt fighter-sweep tactics to hunt down enemy fighters converging on the formation.

The B-17E (Japan) can be outfitted with the following ordnance:

Generally, the plane's role should not diverge from this norm, as it is ineffective and costly as a low altitude bomber. Survival is an utmost importance to be remembered when using this plane. While one target may be missed, there will always be another opportunity to make another pass once reloaded and repaired. The few M2 machine guns in the nose cannot protect the most vulnerable part of any B-17 - the nose. Protected only by a layer of Plexiglas and almost no armor (Excluding the frontal bulkhead, which only covers the pilot/co-pilot's torso), most of the crew critical in the success of the mission, including the pilot, co-pilot, bombardier and navigator would be knocked-out instantly. If targeted by German cannons, most notably, the Mk 108. Just a burst of 30 mm MK 108 placed anywhere on the aircraft , would compromise the crew's survival and even the aircraft's structural integrity.

When facing German fighters and interceptors in realistic battles', it is best to use Omni-purpose or Armour-piercing/Ground Targets ammunition belts for the Browning M2 .50 cal turret machine guns, which is likely to punch through their noses when tailing the B-17E. These ammunition belts are effective at tearing through the engine block of a Focke-Wulf Fw 190D or Messerschmitt Bf 109G, hopefully resulting in an internal engine fire, a pilot snipe, or an inoperable engine for the opponent.

In WW2 the Japanese army captured crashed B-17s in the Philippines and Netherlands East Indies. They were tested by the IJAAF Koku Gijutsu Kenkyujo (Air Technical Research Laboratory) at Tachikawa. Little is known about these B-17s, but their historical photographs are valuable to telling the story of the bombers.