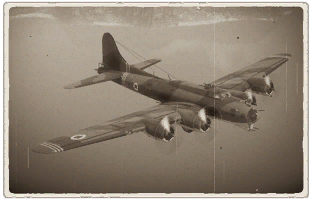 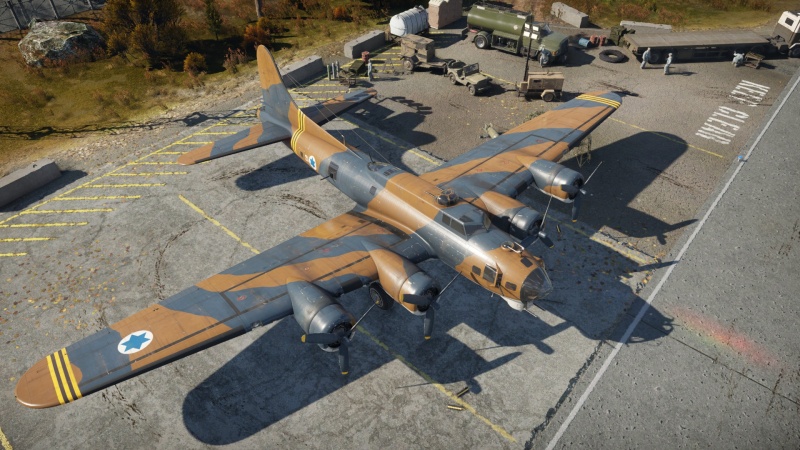 The B-17G Flying Fortress is a rank IV Israeli bomber with a battle rating of 5.3 (AB/RB) and 6.3 (SB). It was introduced in Update "Winged Lions".

The B-17G (Israel) can be outfitted with the following ordnance:

The B-17G was the final combat model of the B-17 Flying Fortress. Produced from late 1943 until several months after the end of World War II, this variant included all successful improvements made to previous B-17 models. It carried a total of 13 machine guns for point-defense, including the new remote-controlled chin turret that greatly improved the B-17's ability to defend against head-on attacks. By the end of the B-17G's production run, a total of 8,680 units were manufactured - just over 2/3 of the total number of B-17s that had ever been built. The B-17G was instrumental in long-range daytime bombing over Nazi-occupied Europe, flying in massive formations often dozens or even hundreds of planes strong.

By 1948, three years after World War II, the B-17 had effectively been decommissioned as a mainstay bomber in favor of new intercontinental bombers like the B-29 Superfortress. Some units remained in service as reconnaissance craft or passenger transports for the new U.S. Air Force; while some other units made their way into private ownership, stripped of their combat armaments and converted to serve a variety of civilian uses.

The Israeli Air Force (IAF), established in 1948 following the creation of the State of Israel, had no real interest nor need for a four-engine strategic bomber. Though it was embroiled in a war with all of its neighbours, all potential targets were no more than a few hundred miles from the airfields - much more suitable for short/medium-range tactical bombers. Nevertheless, the IAF was desperate to purchase pretty much any combat-worthy aircraft it could get its hands on. In the United States, one agent working clandestinely on this task for the Israelis was Al Schwimmer, a flight engineer for TWA, who managed to locate four B-17Gs in private hands. The IAF provided him with the funds to purchase the planes, three of which had already been stripped of their armaments.

Three of the planes were flown from Miami to Puerto Rico, then to the Azores, and finally to Czechoslovakia. There, they were fitted with 7.62 mm M1919A4 Brownings machine guns in place of the missing 12.7 mm M2 Brownings. Makeshift bomb sights and German suspension bomb racks for 250 kg and 70 kg bombs installed. A fourth plane made several attempts to fly to the Azores through Canada, but the FBI had learned of the operation and alerted the Canadian authorities to prevent it from leaving.

As soon as the opportunity arose, the three refitted planes were ordered to fly from Czechoslovakia to Israel, bombing several enemy targets on their way home - including the palace of King Faruk in Cairo. During the Israeli War of Independence, the three planes flew over 200 sorties. They were initially escorted by fighter planes, but it quickly became evident that the Egyptians were reluctant to intercept them; after which the bombers flew without any escorts for the remainder of the war. They bombed targets in Egypt, the West Bank, and Syria.

The three IAF B-17Gs continued to serve until 1953, during which time the IAF managed to acquire original B-17G turrets and M2 Browning machine guns for them. In 1953 the planes were mothballed for a few years until being reactivated as airborne radio transceivers during the 1956 Sinai War. After the war they were immediately mothballed yet again, and were finally decommissioned in 1958. Following its experience with the B-17G, the IAF has never acquired any other four-engine bombers, instead completely switching over to ground-attack aircraft and later to multi-role fighters.