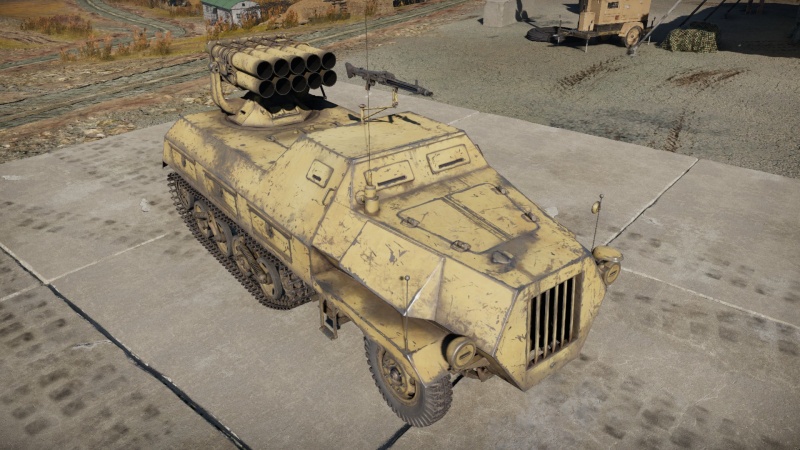 Armour used on this vehicle is fairly typical of other armoured half-tracks, enough to block rifle-calibre machine guns from most angles, but practically non-existent against any anti-tank weapon. While the large radiator and engine can soak up shrapnel from small HE shells, large shells with a high explosive content can destroy your vehicle quickly with the overpressure damage mechanic.

This rocket launcher is mounted to the rear of the vehicle in a 2x5 array, allowing for ten rockets ready to fire.

There is currently only one ammunition choice for the Pz.W.42. These rockets are heavy and have very high drop, leading to curved firing arcs. 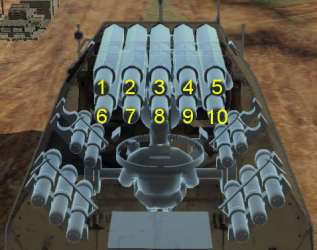 A single MG42 is mounted over the driver compartment. It has a limited traverse but a very fast rate of fire. Its low calibre means that the gun is only really effective against very lightly-armoured enemy ground vehicles or aircraft. The MG can also be used to mark enemies during reloading periods or range targets for the rocket launchers. Because of the mount position, the machine gun is able to fire over cover, while the Pz.W.42 stays completely hidden. This can be used to destroy enemies like the GAZ-MM (72-K) without any worry of dangerous return fire.

The MG42 has a loud and distinct sound, alongside bright tracer rounds. Use this gun only for emergency self-defense or against specific targets of opportunity. The MG42 can attract unnecessary attention toward the lightly-armoured vehicle, exposing its position to enemy snipers and attack aircraft.

The 15 cm Pz.W.42 is a lightly armoured vehicle and can be played as a long-distance tank destroyer or an ambusher.

The first strategy takes advantage of your devastating firepower to disable opponents while staying at a distance, guaranteeing your survivability. The heavy 15 cm Wurfgranate 41 rockets are similar to large-calibre HE shells in damage performance, due to the amount of high-explosive filler. Like HE rounds, these rockets don't lose penetration power over distance. With this advantage, a Pz.W.42 can be used as a mobile artillery piece. The gun sight allows the Panzerwerfer to set an elevation distance to fire at.

One disadvantage of the rockets is that they are extremely heavy, and the rocket drop arc may be tricky for new players to learn. Players may attempt to aim directly at an enemy situated at a reasonable distance away, launch a rocket, and then watch that rocket harmlessly impact the ground far in front of the target. Gain a lot of practice in order to get used to the rocket arcs. Experienced players can consistently hit targets at range and can even be able to launch rockets over hills at unsuspecting enemies. Targeting enemies beyond 1,500 m may require the use of the sight distance control feature or the player may not be able to keep their eyes on the target to make necessary aim corrections.

Another disadvantage of the rockets is that they are naturally inaccurate. Players may need two or three rockets to ensure the destruction of an enemy vehicle. Launch delay is short, but the Pz.W.42 only has ten ready at a time. Keep in mind that terrain irregularities will slow you down and hinder your movement. Position your vehicle carefully when sitting at a shooting spot to be able to hide as soon as you are forced to reload. If your position is compromised, enemy snipers, artillery, and aircraft may be coming your way.

The Pz.W.42's armour isn't strong enough to resist heavy machine gun fire within 500 m, but its rear weapon layout allows you to expose only a small part of your vehicle toward the enemy. In urban combat, the Panzerwerfer can set up excellent ambush positions.

One strategy is to place yourself behind hard cover between buildings close to a perpendicular street. When an enemy vehicle passes by, you can fire a rocket or two into the side of it. You can drag destroyed vehicles to create cover if none exists.

Another strategy is to place yourself at the end of a narrow street behind hard cover. When an enemy vehicle advances up the street, you can fire a few rockets to destroy it. Rangefind the end of the street to know how much to elevate the launcher. Keep in mind that items like street signs, street lights and small trees in the way may detonate the rocket before it impacts the intended target. You can clear these obstacles by driving over them or shooting them with the MG42.

With its thin armour, any enemy can knock out the 15 cm Pz.W.42, but some stand out for being particularly dangerous:

Production of the 15 cm Pz.W.42 (15 cm Nb.W.41) auf Sf. started in 1942 by the Opel company, based on the Maultier half track. It was built in series from April 1943 to March 1944, together with the accompanying ammunition vehicle, the Sd.Kfz. 4 Munitionskraftwagen.

Similar to the Soviet BM-13N "Katyusha" launcher, the Pz.W.42 was used in mass barrage attacks on enemy positions. Also like the Katyusha, the loud, distinct sound of the rockets firing had additional psychological effects. The Panzerwerfer 42 and the related Nebelwerfer launcher gained the nickname "Moaning Minnie" by Allied troops for this reason. Large amounts of these launchers were used throughout 1944 and 1945 on both the Eastern and Western fronts in actions like the Battle of the Bulge and defense of Berlin.

Something you don't expect to see when looking at vehicles ammo: Panzerwerfer (15 cm Pz.W.42) - HowToPlay1337