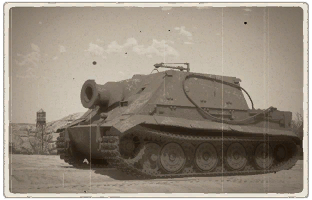 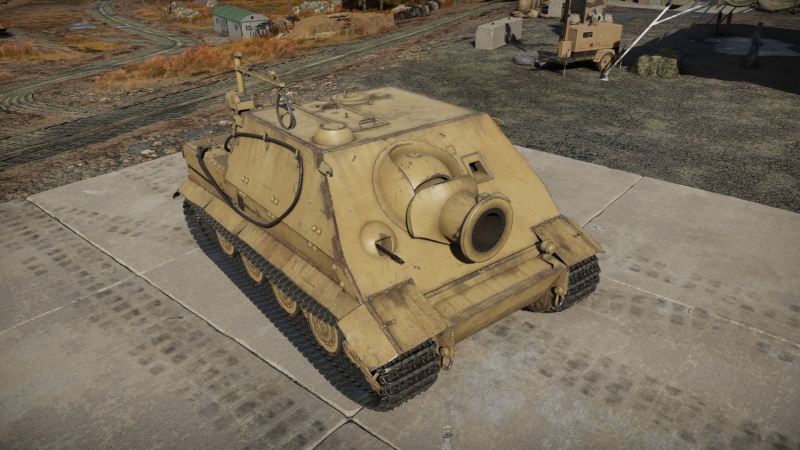 The 38 cm Sturmmörser (also known as the Sturmtiger) is a premium gift rank IV German tank destroyer with a battle rating of 6.0 (AB), 5.7 (RB), and 6.3 (SB). It was introduced during Update "Fire and Ice" as a reward for the "Dreams come true" 10th Anniversary event.

The survivability and armour of this vehicle can vary quite a lot depending on what type of vehicle you are facing. When engaging in combat with a vehicle which is in front of you, your frontal armour may at times actually be able to withstand hits. The issue is you have a big profile so hiding isn't exactly an option. Your armour is effective against low caliber rounds, and can protect you against some autocannon fire. The problem is that whenever an enemy with a high-peforming round is on the battlefield, which is able to penetrate your frontal armour, you wont' be able to survive much. The reasoning is due to how ammo is stored, which really hinders you. This is especially highlighted whenever an enemy, even if its a light tank, manages to flank you and shoot you from the side. Your armour is at its weakest there and the only thing on the other side is the rest of your very explosive munitions. In conclusion, to fully make the most out of your armour do not push into the frontlines, stay well hidden from danger.

This vehicle can be used in a wide variety of ways, from short range urban combat to long range artillery fire from behind cover.

Right after spawning, it's usually a good idea to set the gun sight's elevation to 100 or 200 m, to avoid having to aim upwards too much when shooting at a relatively distant target and to know easily if your shell will fly over a close obstacle or not.

Due to the extremely long reload, staying close to your teammates is strongly recommended if playing near the contact line, as you will need backup in short range engagements; after you've reloaded, bear in mind that there is a live rocket in your barrel that is vulnerable to pretty much any gun the enemy has, so try to shoot as soon as you've reloaded if you're being targeted or angle your gun away from the enemy if you don't intend to fire yet.

When shooting from a distance, try to get the tank on flat terrain, as inclines tend to somewhat throw off your sight's range indicators and, due to the very steep impact angles of your rockets, getting the aiming distance wrong by just a dozen meters could mean that your shell will fly over your target or hit the ground too far to damage it.

The Sturmtiger was a siege tank, based off the Tiger I heavy tank, armed with a 380 mm rocket assisted mortar. Fourteen were made, seeing service on the Western Front and the Warsaw Uprising.