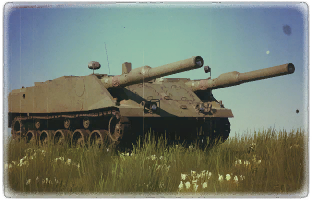 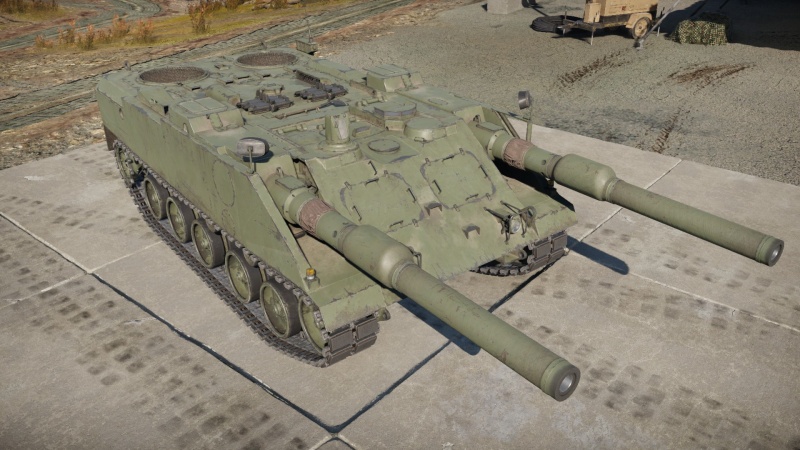 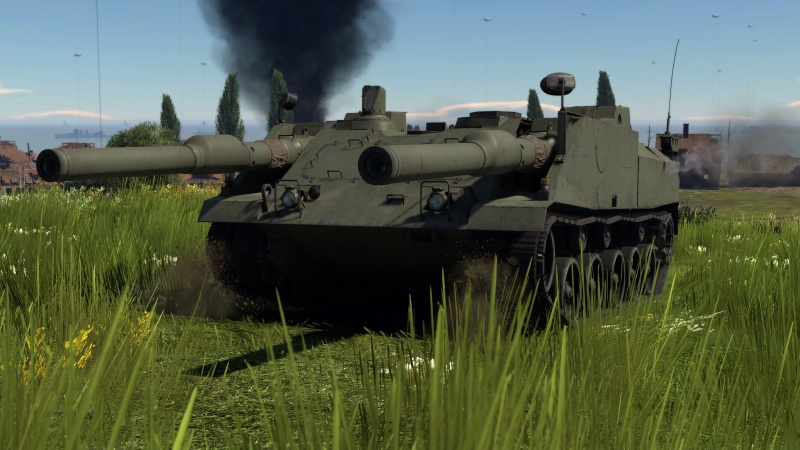 The Doppelrohr-Kasemattpanzer Versuchsträger VT1-2 (lit. Double-barreled casemate test vehicle) is a gift rank VI German tank destroyer with a battle rating of 8.0 (AB) and 8.3 (RB/SB). It was introduced during Update 1.91 "Night Vision" as a reward for the Operation Shipyard event.

The VT1-2 was the outcome of a project envisioned to create a successor for the Leopard 1. Its main focus was on the importance of firepower and speed, hence the dual Rheinmetall L44 (120 mm) cannons and non-existent armour. However the VT1-2 is still a very effective tank at its battle rating, with the left cannon possessing an auto-loader the VT1-2 can shoot 3 shells in 5 seconds. Not to mention the type of shells the VT1-2 possess, in this case the DM12 HEAT-FS which has 480 mm of penetration. The VT1-2 also has one of the fast hull traverse rates and can reach the speeds of 70 km/h in a matter of seconds.

The VT1-2 has the ability to climb to speeds of 70 km/h in a matter of seconds, with the help of 8 reverse gears, the reversing top speed is also 70 km/h. One of its features is the ability to adjust its suspension to allow it to change only its pitch (i.e lower the front and raise the back or vice versa), the height and roll cannot be adjusted. If the VT1-2 pitches up or down too much its top speed and manoeuvrability is significantly reduced, so it is recommended that the be lowered up to a point where speed and manoeuvrability is not negatively reduced to maximise gun depression and mobility. 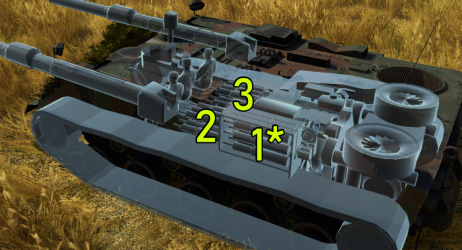 The project for an experimental turretless tank was started for development in Germany in the early 70's as part of the replacement program for the Leopard 1. The unusual layout of the "casemate" tank type had several advantages: the possibility of installing two cannons at once, increased protection due to low silhouette and enhanced protection in the hull front profile and also increased mobility due to a reduced weight compared to traditional tanks. As part of this innovative project, two vehicles were built under the general name of Versuchsträger (German: experimental platform). The first VT1-1 prototype was placed on a shortened chassis and was equipped with two 105mm rifled cannons with manual loading.

On the second VT1-2, two 120 mm calibre smoothbore cannons were used - the left cannon mounted with an automatic loader mechanism. Both of these prototypes used a number of parts and assemblies from the European "long-term production" experimental KPz-70. Since both vehicles were intended exclusively for the testing and development of new battle tactics, they were made from structural non-armour steel. Tests carried out by several NATO block countries, but they all left the project one by one and in 1985, Germany itself refused further development in favour of developing the Leopard 2 which was created according to a classic tank scheme.