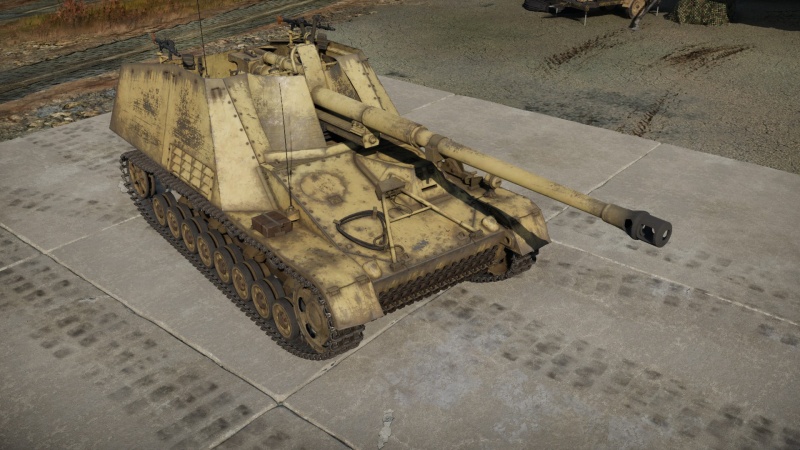 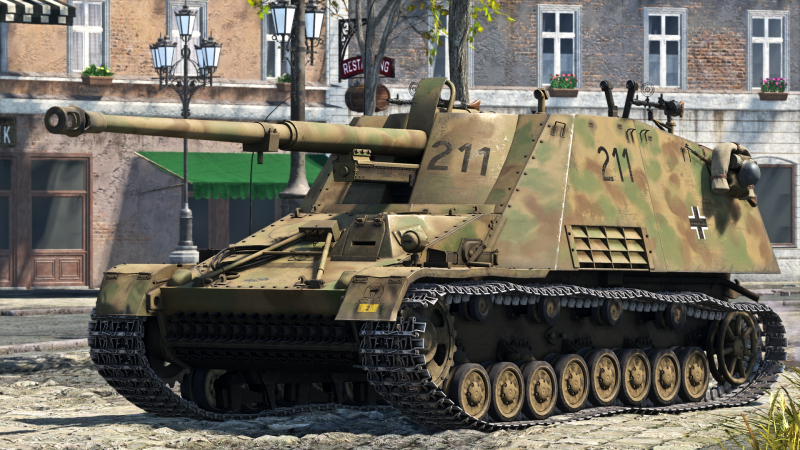 The 8,8 Pak 43/1 Sf."Nashorn" ("Rhinoceros") (Sd.Kfz. Index: Sd.Kfz. 164) is a rank III German tank destroyer with a battle rating of 5.3 (AB/RB/SB). It was introduced in Update 1.57 "Battle March". It was developed as an interim solution to deal with Soviet heavy tanks on the Eastern front who were immune to the guns of Marders. It consists of an 88 mm anti-tank gun PaK 43 mounted on a Panzer IV chassis. It is also known as the "Hornet" ("Hornisse" in German).

The Nashorn's armour is paper-thin; it will not protect the crew or internal modules even from heavy-calibre machine gun fire. And, the vehicle can be knocked out with overpressure from high-calibre HE rounds. The Nashorn also lacks roof protection, making it a very desirable target for enemy fighters and attackers. Stay behind cover to avoid strafing runs or rocket attacks. One interesting (and somewhat comical) note on the Nashorn's armour is that being so thin, high-penetration shells may pass through it without detonating at all.

The 88 mm PaK 43 gun has great penetration characteristics at all ranges and angles with an average reload time. Due to the vehicle's design, the gun should be used to snipe enemy targets from long ranges. Most enemy tanks will be crippled or destroyed if a shot connects. 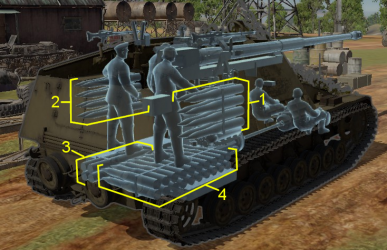 Speaking of, this vehicle's armour is very thin. It will not protect internal components from heavy-calibre machine gun fire, and it certainly can't defend against full-calibre tank shells. Sometimes, high-penetration shells will overpenetrate and pass through the vehicle without detonating, but this should not be counted on. Most of the time, any hit that connects will do great damage to the tank. Additionally, this vehicle has a large silhouette and can be destroyed by large-calibre HE rounds. Even worse, the Nashorn is open-topped, which means that artillery is a significant threat. Enemy planes will also see the Nashorn as a highly desirable target, since strafing runs can cripple or destroy the vehicle. The Nashorn has no way of defending against this. It is equipped with machine guns, but they do not have enough elevation to fire at planes. To avoid artillery and fire from planes, stay behind cover: shrubbery and buildings work well for this.

In 1942, the German tank destroyers equipped with 75 mm guns (Marder & StuG IIIs) became ineffective following the arrival of uparmoured Soviet KV heavy tanks on the Eastern front. To quickly answer that situation, the German command mandated an interim vehicle to be proposed before the arrival of a properly designed heavy Panzerjäger. The interim solution was to rely upon the newly developed anti-tank cannons whose calibre had proven very effective even against heavily armoured targets.