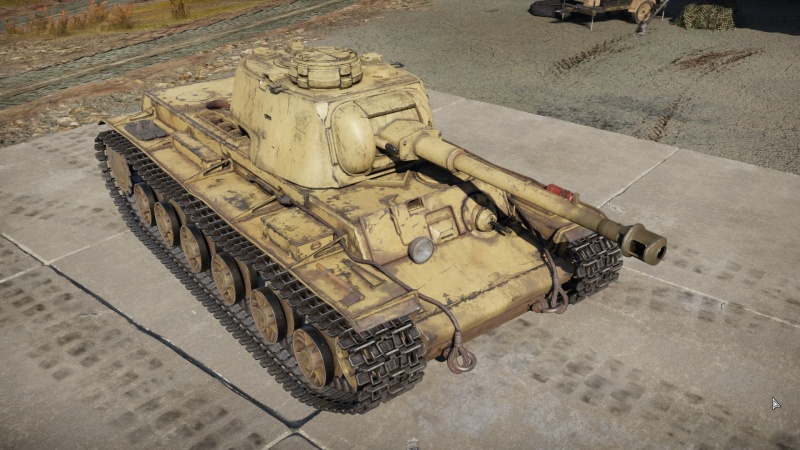 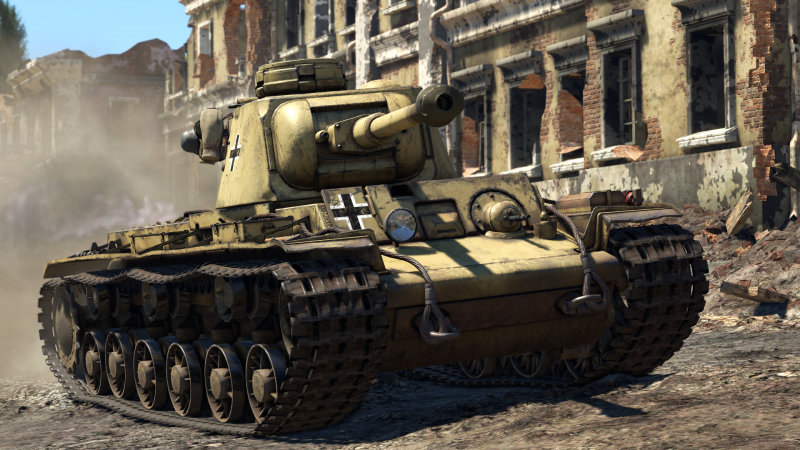 The ▀Pz.Kpfw. KW I C 756 (r) is a premium rank III German heavy tank with a battle rating of 5.0 (AB/RB/SB). It was introduced in Update 1.43. A heavily modified KV-1 heavy tank, the most glaring change is the gun. Modified to carry the 7.5 cm KwK40 L/48 gun, this change offers the KV-1 a very noticeable improvement in firepower by comparison to the "normal" Soviet armament.

The ▀KW I C 756 (r)'s German-made 75 mm gun is very effective at its battle rating. Known as the KwK40 with barrel length L/48, players have four different ammunition types to choose from: APCBC, APCR, HEAT and HE. As is common with German 75 mm guns it features dependable accuracy and formidable muzzle velocity: from 990 m/s for APCR to 450 m/s for HEAT. The reload time in game is 7.6s, giving the ▀KW I C 756 (r) the potential to fire eight rounds per minute. The gun allows the ▀KW I C 756 (r) to be quite strong in long-range engagements, especially at its BR, where you will face many easy to penetrate medium tanks. In higher ranks it will benefit from a superior fire rate when compared to most higher calibre guns.

AP ammo has decent armour penetration and APCR will penetrate the frontal armour of anything up to around 500 m with the exception of the Sherman Jumbo, though give a higher tendency to bounce at extreme angles. Thanks to the aforementioned muzzle velocity, shells fly in a nice flat trajectory making aiming easier in RB and SB. German 75 mm guns have good post-pen fragmentation characteristics, causing predictable damage to crew and modules inside the tank. It will most likely take two APCBC shells to knock out the crew, more or less depending on the enemy tank. The total ammo capacity is 80 rounds. It is recommended to carry mostly APCBC, relying only on APCR when facing otherwise impenetrable targets. HEAT rounds sound good in theory since they retain penetration over any distance, but the arching trajectory and low velocity makes it impossible to hit moving or even stationary vehicles at a great distances. There are four ammo racks in total: two on the sides of the turret (5 rounds each), one to the right of the driver (18 rounds) and the largest directly below the turret. The chance of an ammo explosion from a hit to the front is slim however if hit at the side and low there will most likely be an explosion. The only real way to reduce the risk of an ammo explosion is to take out 10 shells so that the two ammo racks in the turret will be empty.

The armour on the ▀KW I C 756 (r) is strong for its BR. Frontal hull armour is up to 100 mm thick, slopped at 30 degrees, on par with a Tiger's armour. If the hull is angled correctly (around 40 degrees) that number can increase up to 145 mm of effective protection. With that kind of armour the only tanks that can penetrate the ▀KW I C 756 (r) are the Panther, IS-2 and Panzer IV/70(V) with AP ammo, though several more tanks can shoot APCR rounds and successfully penetrate. The side also has additional protection because of the infamous Soviet wheels and tracks. All that said the ▀KW I C 756 (r) has its drawbacks with regard to survivability. The front hull has several weak points which are protected by 75 mm of armour, penetrable by most enemy AP shells. The turrets mantlet and surrounding armour is only 50 mm and poorly slopped making it extremely easy to penetrate. If the side is exposed there is a high likelihood that the fuel tanks or the ammo rack will explode from a direct impact. Always attempt to angle the hull when facing an enemy. When reloading the gun swing the turret to the side so that the mantlet is protected by the strong side armour.

The tank's mobility is serviceable at best. It has a decent top speed but off-road the tank will slow down to a crawl. The acceleration is poor and a lot of speed is lost when turning. Taking long routes to the objective is not recommended. Flanking and manoeuvring is next to impossible. Reverse speed is very sluggish as well. Because the tank is so inherently slow it's best to avoid hills, slopes and mud. Do not over-extend or you will find yourself unable to reverse out of a bad situation quickly. The ▀KW I C 756 (r) can be effective in close quarters but always be one step back from the front to avoid being flanked by faster tanks. Going into a wide open area can be very dangerous. If the enemy has any positions that will allow side shots or access to un-angled sections of the tank, pushing is not recommended. On the other hand, positioning the ▀KW I C 756 (r) in advantageous positions overlooking long-range environments (where the additional armour protection will be even more effective) is a decent strategy.

All in all the ▀KW I C 756 (r) has a good gun and strong armour but suffers in manoeuvrability and speed (forward and reverse). It is best to control the engagement, either by maintaining distance or using effective cover to protect your flanks and allow angling. Be mindful of the weak spots on the front hull and the mantlet. Do not expose the side of the tank. The ▀KW I C 756 (r) isn't a medium tank, so be cautious when extending in towns or other close quarters locations.

When trying to engage a ▀KW I C 756 (r), it's a good idea to close the distance. Already very strong, the armour is even tougher to penetrate at long ranges, becoming outright impossible for some tanks. If given no other choice, try shooting for the mantlet. Considering the area is small, it will not be easy to hit. Shells may bounce off the gun given its size. Still, considering the strength of the ▀KW I C 756 (r) at long range, advancing to get a better shot is not recommended if in its field of fire.

When up close there are multiple places on the tank where massive damage can be dealt. When facing the front of the ▀KW I C 756 (r) there are 3 distinct weakspots: the drivers view port, the hull machine gunners port and the mantle of the gun. Most tanks shouldn't have a problem penetrating these spots with AP ammunition. At the side there is a chance to shoot one of the ammo racks. The ammo racks are located directly below the turret and just above the lower wheels, directly to the right of the driver and on either side of the turret. The turrets side and back armour is uniform thickness and it can be pretty tough to penetrate it when its angled. It's best to aim just below the turret and shoot the the hull (note that there is a small strip or additional 25 mm armour just below the turret so avoid shooting that spot) to knock out the crew in the turret. Also watch out for the track and wheels on the side, they can add enough armour to prevent penetration. When firing at the back of the tank it's best to shoot the turret because there aren't any fuel tanks near the engine. There isn't much use of taking out the engine because of the fact that the ▀KW I C 756 (r) is inherently slow and most likely won't run away. 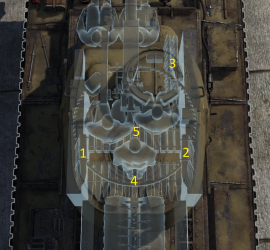 The KW I C 756 (r) (Germany) is a potent vehicle when angled (preferably 30 to 45 degrees to the left or right). The long 75 mm is a deadly weapon as well. You have average mobility at best, but this is a great vehicle if you know how to use it effectively. 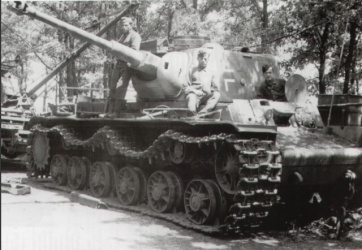 The appearance of the KV-1 during the German invasion of the Soviet Union came as a huge surprise. No German anti-tank weapon, bar the 88 mm flak was able to penetrate easily. However, as the war progressed, Germany began to build a better tank and anti-tank guns in response to the KV-1 and T-34. The Soviets in turn also modified the KV-1s in order to adapt them to the changing battlegrounds, but they were eventually phased out in favor of the newer IS heavy tank series.

During the battles that raged on the Eastern Front, a few KV-1s were captured by the German due to the crew abandoning them from mechanical failures or combat damages. The Germans recovered and repaired these tanks, using them against their former owners under their designation Pz.Kpfw. KV-1 A 753(r) for the 1941 model (KV-1B) and the Pz.Kpfw. KV-1B 755(r) for the 1942 model (KV-1C). While these tanks were adequate by German standards, the decision was made to modify the captured KV-1 tanks, giving them better guns and armour. This modified tank was to be designated the Pz.Kpfw. KV I C 756(r) and was based on KV-1C model with applique armour and a cast turret. The first major change to the vehicle was the removal of the old 76.2 mm gun with the 75 mm KwK40 seen on the newer Panzer IV on a new mantlet design derived from the Ausf. G model. The commander's cupola on the KV-1 was also replaced with the Panzer IV's with the two-part hatch. The ventilator on the turret was taken from a T-34 and installed and utility baskets were added on the rear deck of the tank.

Other German vehicles captured from the Soviets