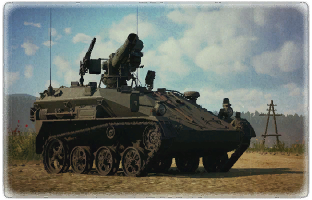 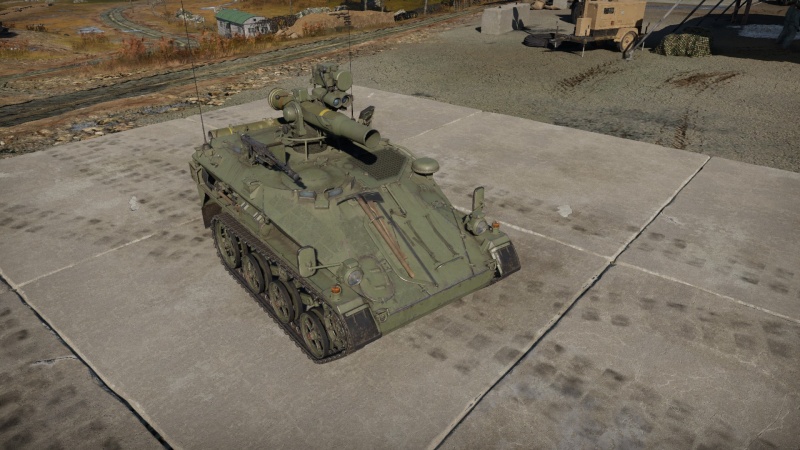 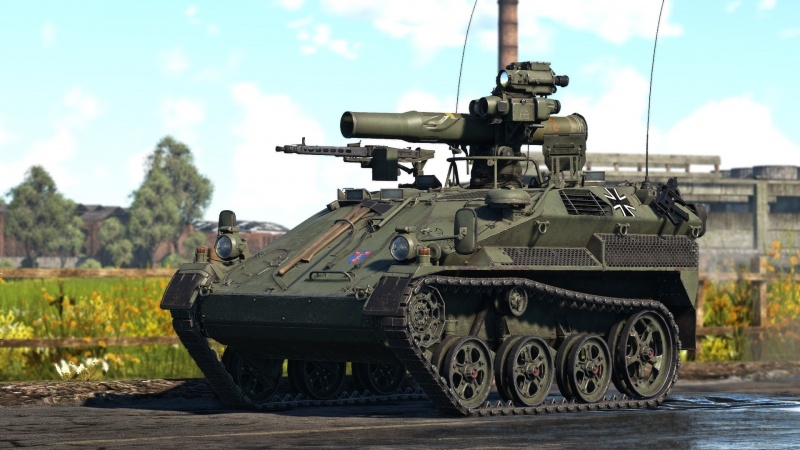 The Waffenträger Wiesel 1A2 TOW is a rank VI German tank destroyer with a battle rating of 9.0 (AB) and 9.7 (RB/SB). It was introduced in Update "Ground Breaking".

A tiny tankette with a big punch, the Wiesel 1A2 allows players to utilize the vehicle's tiny profile to bring the TOW anti-tank missile wherever they wish in the battlefield, just so long as they are not seen first.

The armour on the Wiesel 1A2 is more likely meant for keeping the crew members out of the weather elements than actually for protecting the crew from any form of gunfire barring the weakest rifle-calibre ammunition. The 60° slope on the front of the tank will only spare the crew from rifle-calibre machine gun fire, providing about ~25 mm of protection against projectiles. Against heavy machine gun fire and large calibres, the front plate will be pierced, and the crew and ammo will quickly take damage.

In terms of survivability, the Wiesel performs rather poorly there as well. Being a compact tank, the crew of 3 men and the ammunition are cramped together, turning any penetration of the tank into a crew knock out, if not an outright ammo rack detonation since the racks are sitting behind the commander and the gunner. The only saving grace is the frontally left-mounted engine and transmission, which on extreme occasion will absorb an incoming projectile, even a main battle tank shell, but again, this is a rare occurrence.

The mobility of the Wiesel 1a2 is quite excellent, boasting 30 horsepower per ton with 87HP(spaded) on a 2.9T chasse. with such acceleration the Wiesel can quickly reach its top speed on both hard road and grassland ground very fast. The Wiesel does quite well climbing hills and steep inclines when spaded. Commanders of a spaded Wiesel can expect the tank to reach a top speed of about 51 KM/H on grass dirt terrain, and about 65 on roads, although higher speeds can be achieved in prolonged straight-line dashes.
Speedforward / back
AB87 / 32 km/h
RB and SB81 / 30 km/h
Number of gears6 forward
2 back
Weight2.9 t
Engine power
AB166 hp
RB and SB87 hp
Power-to-weight ratio
AB57.2 hp/t
RB and SB30.0 hp/t

The modification acquisition order for the Wiesel differs from other tanks severely. After getting Parts and FPE, the modification that should be pursued is the TOW-2A. Acquiring this missile will allow the Wiesel to frontally engage and kill any target at its BR with few exceptions, granting the tank a significant power boost. The next modification to be acquired is the thermals, as this will allow faster target acquisition and allow for more tolerable conditions in night battles. After the previously mentioned modifications are obtained, all other modifications are to be gathered at the user's preference. 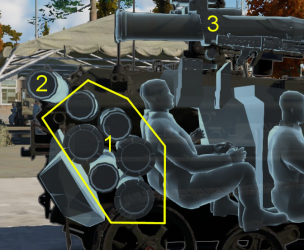 Ammo racks of the Wiesel 1A2

The primary use of the Wiesel 1A2 should be as an ambush tank destroyer. Utilizing the ATGM's impressive depression angle of -20* to conceal the Wiesel on the tops of hills and in ditches allow the player to be all but invisible to enemy armour. In terrains that lack such features such as cities, the Wiesel is able to best fulfill its role by hiding in corners and dead ends angles so that an enemy approaching the Wiesel will not be able to react in time. Due to the long reload of the ATGM paired with the paper-thin armour, it is not recommended to brawl with this tankette. However, if the Wiesel has the element of surprise, the punchy TOW-2A can deliver a killing blow in a single hit. Another aspect to note is the insanely good power-to-weight ratio, allowing Wiesel to climb steep inclines and to access locations not often accessible to most tanks. Use this mobility to place the Wiesel in a spot where enemy tanks will not be expecting it.