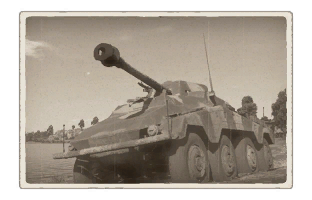 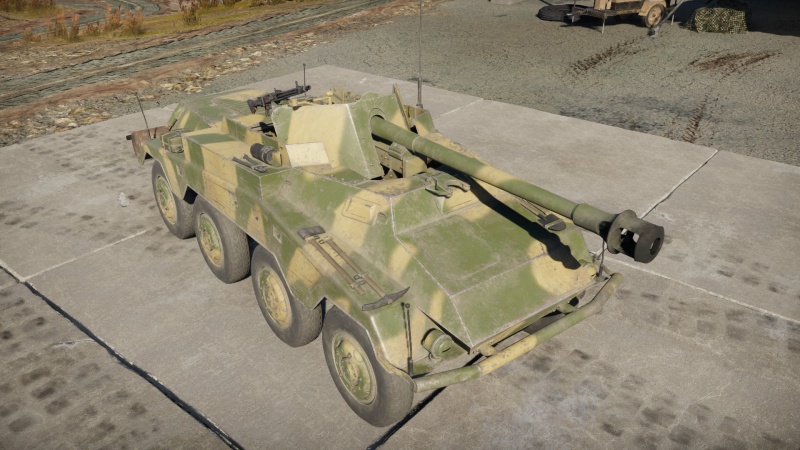 The s.Pz.Sp.Wg. (7,5 cm) Sd.Kfz.234/4 (full name: Schwerer Panzerspähwagen 7.5 cm Sonderkraftfahrzeug 234/4 Panzerabwehrkanonenwagen) is a premium gift rank III German tank destroyer with a battle rating of 4.0 (AB) and 4.3 (RB/SB). It was introduced during Update 1.69 "Regia Aeronautica" in the "Operation S.U.M.M.E.R." event of 2017 that lasted from 28 July to 28 August, unlocked after obtaining 7 tanker Marks of Distinction.

The Sd.Kfz.234/4 is easily picked out by its long gun and gun shield. If recognized, the enemies will see the vehicle as an easy target (in high BR's), but also as a deadly priority target!

This armoured car is a lot of fun to play. The long 75 mm gun and the 234 chassis work very well hand in hand. The best way to play this mini-beast is to get on the enemies flanks as fast as possible (terrain permitting) and hide in the bushes. Take shots with hit probabilities, but hold fire more uncertain hit chances. Remember that the 234/4 can be and will be torn up by 12.7 mm machine gun fire, assume the position has been spotted after firing and move out via reverse. Do not engage in a straight-up gun battle or the 234/4 becomes scrap metal.

The 75 mm gun is strong enough to destroy most tanks with one hit, meanwhile the 234/4 has a great speed of 30-40 km/h forwards and backwards to relocate. Because of this, it is possible (though not necessarily needed) to use the 75 mm and return fire while making haste. Terrain foliage such as bushes are great assets for concealment, shadows as well so use them and stay hidden.

The best way to deal with this tank is to immobilize it while sitting outisde of its gun's reach. Because of its low armour values, it can be easily penetrated with 12.7 mm MG fire or HE shells to the open roof. Most armour-piercing shots will simply over-penetrate the vehicle's front armour and will not do much to the crew compartment unless aimed at specific crew or module locations. As such, explosive ammunition is the preferred methods of elimination (overpressure). 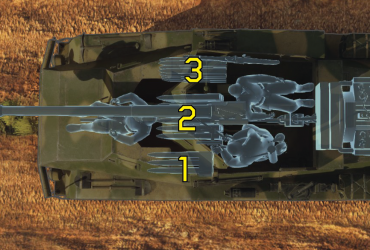 The Sd.Kfz.234 cars were originally intended for the conflicts in North Africa. However, the engine development took abnormally long to complete and by the time it was ready, the North African theatre had concluded. Nevertheless, they served in the Western and Eastern front with success, but was impeded by its low production count.

The Sd.Kfz.234/2 variant was arguably the most popular, as the staple of the 234 family. The vehicle served in the Panzer Lehr Division, 1st and 2nd SS Panzer Division, 2nd, 7th, 13th, and 20th Panzer Division. The Sd.Kfz.234 in the recon companies were allocated in 19 or 25 vehicles per division, further split into platoons up to six vehicles and one as the headquarters. However, due to their low production numbers, this allocation was rarely kept in full strength in the war,