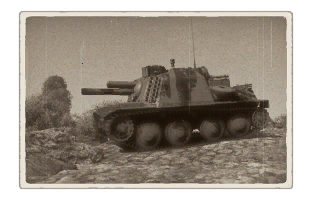 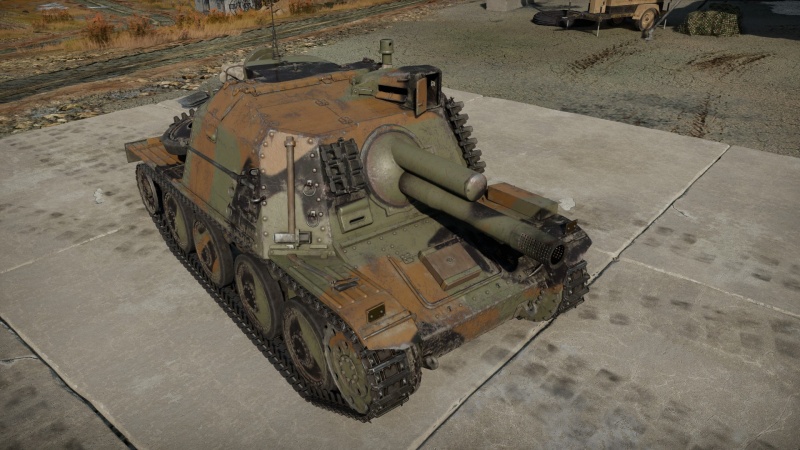 Due to the cramped crew compartment and scattered ammunition within the compartment, any penetration by a shell is likely to cause critical damage to multiple modules and/or crew members.

The Sav m/43 is based on the chassis of the Strv m/41 and thus has a similar level of mobility. It is considerably heavier, however, and thus correspondingly more sluggish. While the forward top speed is adequate, the reverse speed is quite poor, making it hard to retreat.

The 1946 model of the Sav m/43 now features the 10,5 cm kan m/44, a 105 mm howitzer. It starts off with the very inadequate slpprj m/44 APBC round. This round lacks the penetration or post-penetration damage to be competitive against the tanks the Sav m/43 faces; thus, it is of the utmost importance that the psgr m/49 HEAT shell is unlocked as soon as possible. This round has an amazing 240 mm of penetration, the most of any round available to any Rank II tank in the game, and also has substantially better post-penetration effects than ones of the competition.

There is also an HE round available that is actually effective against most light tanks and medium tank roofs, but landing a fatal overpressure shot on a medium tank is difficult, especially in RB. In AB, HE shell is the only one that can consistently take out tanks in a single hit, assuming it does hit a weak spot.

The shells all have a relatively low muzzle velocity, and it can therefore be quite hard to hit moving targets at long range. Conversely, the substantial arc of the shell trajectories due to the low-velocity shells allows the Sav m/43 to sometimes hit targets hiding behind cover, or to fire from behind cover itself.

One interesting quirk of the gun is that it is not mounted onto the vehicle pointing directly forward. In fact, the gun is, by default, pointing around 15° to the left, giving it more horizontal traverse to that side.

Like the preceding 1944 model, the Sav m/43 (1946) performs best in the hull down positions, as it can use the gun depression to present a steeper angle on the frontal armour to increase its effective thickness. However, it commonly faces tougher opposition at this BR, including the very common T-34, M4 Sherman, and Panzer IV medium tanks, thus the armour should not be dependant on in case of a slugging match against these vehicles. The SAV m/43 shines with its allies in a supporting role, where it's not the main target for the opposition but can still do enough damage to the enemy target for allies to take it out. Its 10 second reload makes it not suitable for a frontline brawler, and should not be treated as such.

The psgr m/49 is a penetrative HEAT shell that is good enough to deal with the most heavily armoured vehicles in the BR bracket. Though the shell does have enough penetration to deal with heavily armoured vehicles, it will have a bit of a trouble in long range fights, as the shell's slow velocity means it will take a bit of practice to learn how to lead the shell and hit at distant moving vehicles. If the opponent is not moving, it will have an easier time to at least calculate the distance and more accurately hit the target. Though having 240 mm of penetration doesn't mean it will instantly neutralize the opponent, it will cause heavy damage to vital components or take out a large chunk of the crew, making it a very efficient support vehicle.

The sides and rear armour is very thin and only consist of 10-15 mm armour, this is very vulnerable to heavy machine gun and autocannon fire. Exposing it to the enemy will lead to a quick demise, especially against the extremely common M2 Browning that is usually equipped on American based vehicles, One should also be careful of most wheeled vehicles and SPAA, which can easily outflank the SAV m/43 and target the vulnerable sides.

In March of 1940, Sweden ordered about 90 TNH tanks (known as the Panzer 38(t) in German service) from ČDK, but Germany, which had occupied Poland in 1938, confiscated the tanks for its own use as the Panzer 38(t) Ausf. S. Sweden still needed the light tanks, and after negotiations the Swedish manufacturer Scania-Vabis was allowed to produce them under license, and compensation for the lost tanks. Sweden ordered 116 Strv M/41 SI in June, 1941, and in June of 1942 Sweden ordered 122 Strv M/41 SII. The last 18 Strv M/41 SII were built as the Sav M/43 in 1944. Another 18 Sav M/43 were purpose-built afterwards. The Sav M/43 was a casemate assault gun made by removing the turret of the Strv M/41, and adding a casemate superstructure, initially housing a 75 mm gun. The 75 mm gun was replaced by a 105 mm M/44 Bofors cannon. The Sav M/43 served in artillery units until 1951, when they were given to armoured units instead. They served until 1973.

In 1942, Sweden began developing a new SPG built on a modified chassis from the Czech LT vz.38, better known as the Pz.38(t) in the German army. This new SPG was supposed to be equipped with the 75 mm L/31 cannon that was already in production. By autumn of 1942, a wooden model of the planned vehicle had been created and, after a number of improvements, the project advanced to manufacturing prototypes. Exactly one year later, in October of 1943, testing began. The SPG passed with flying colours and hit assembly lines under the designation Sav m/43 (short for "Stormartillerivagn", Swedish for "assault artillery carriage"). A little later, a version with a 105 mm gun came out, and, by the end of 1946, all m/43 SPGs had been re-equipped with this new cannon. The Swedish army had used this SPG until the early 70s. From the moment it entered military service until the end of the Second World War in Europe, the Sav m/43 vehicles were grouped by the Norwegian border and then assigned to infantry units as fire-support vehicles when the army was reorganised.