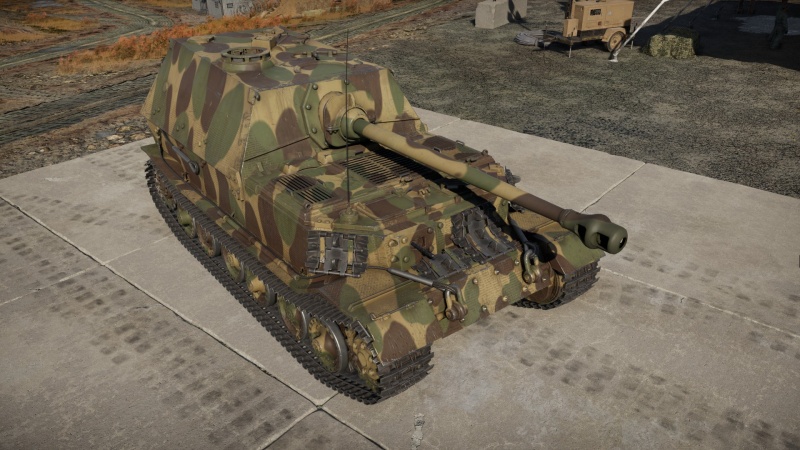 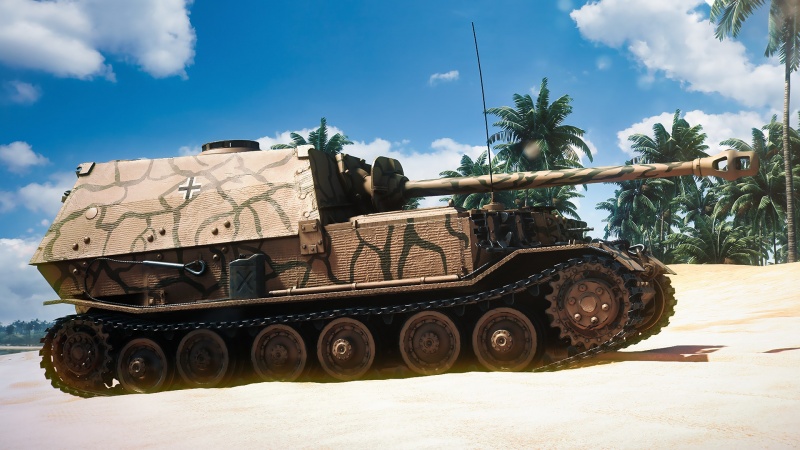 The Panzerjäger Tiger (P) Elefant (Sd.Kfz. Index: Sd.Kfz. 184) is a premium gift rank IV German tank destroyer with a battle rating of 7.0 (AB) and 6.7 (RB/SB). It was introduced during Update "Wind of Change" as reward for Battle Pass: Season VII, "Armoured Elephant". 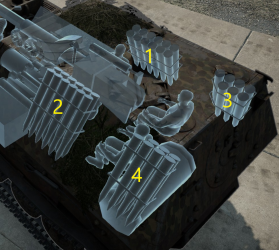 Ammo racks of the Ferdinand (identical)

The history of the Elefant begins with the program to develop the Tiger 1, both Porsche and Henschel would compete and submit designs for trials, where eventually one would be chosen for production. Porsche's design was the infamous VK 45.01 (P), a design riddled with mechanical issues apparent even during the trials, while Henschel's design was the VK 45.01 (H) which would ultimately end up being chosen and would enter production as the Tiger H1.

Ferdinand Porsche, the founder of the company Porsche was far too confident in his VK design, so much so that even before the trials for the Tiger had begun he had created 90 VK hulls. It was decided that these would not go to waste, and a majority were turned into the casemate assault gun known as the Ferdinand, which would mount the long 88. cm gun eventually seen in vehicles such as the Tiger II (H), Nashorn or Jagdpanther; while 1 of the VK hulls would become the Panzerbefehlswagen VI (P).

The Ferdinand tank destroyer would first see service during Operation Citadel, specifically during the battle of Kursk to mixed results. The aforementioned mechanical problems would plague it during the battle; however when used in its intended role, the Ferdinand would be quite successful.

Following the battle, the remaining Ferdinands would be sent back to Germany for repairs and modifications. Here is where the Elefant was born. Additional frontal armor, a hull mounted machine gun for self-defense purposes and a commander's cupola taken from a StuG III G would be the new additions to the vehicle, before it was sent to Italy, with disastrous results.

Little is known about the Elefant's service following this, however at least two individuals survived to take part in the Battle of Berlin, but their ultimate fate remains unknown.

One Elefant remains, formerly part of an exhibit in the Bovington Tank Museum it is now in storage in Fort Lee VA.