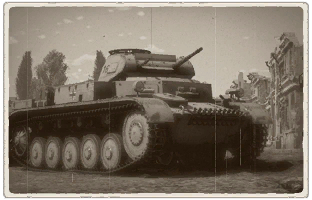 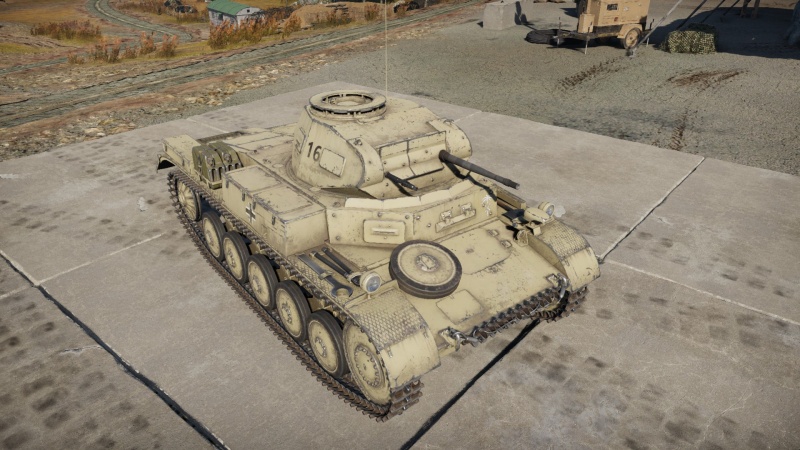 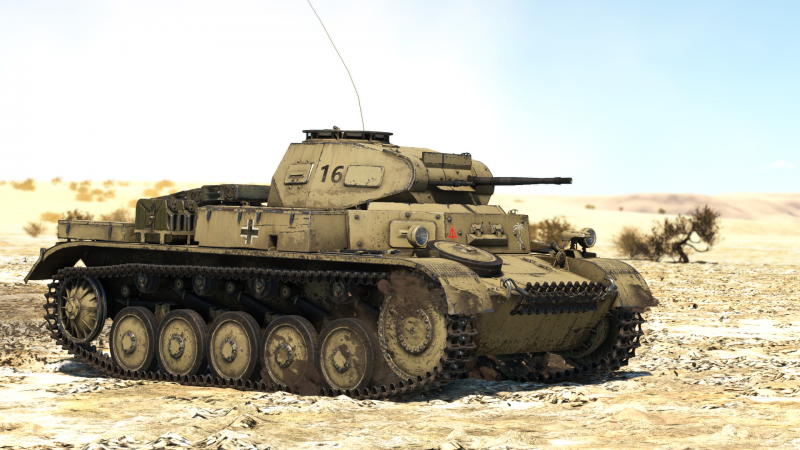 The Pz.Kpfw.II Ausf. C (DAK) is a premium rank I German light tank with a battle rating of 1.7 (AB) and 1.3 (RB/SB). It was introduced during the Closed Beta Test for Ground Forces before Update 1.41. During the 2017 "German Unity Day" event, the Pz.II C (DAK) could be earned for free.

The Pz.II C (DAK) is a premium version of the Pz.II C, with a specific camouflage. DAK stands for "Deutsches Afrikakorps", the infamous German tank division commanded by Erwin Rommel in Northern Africa. It is a quick and nimble vehicle that does not have an enormous punch to follow up. While the 20 mm gun does not have a huge penetration, the armour-piercing rounds are capable of taking care of most of its reserve vehicle opponents.

This is a very quick little tank when fully developed. However, even completely undeveloped, it has a decent turn of speed. It has a high rate of fire which makes it very forgiving as far as aiming and hitting is concerned, and even allows a (relatively) accurate fire on the move capability, assuming the ground is not too rough.

On the rough ground the Pz.II pitches like a lifeboat in a storm, making firing on the move impossible. However, this is where you are able to hide in the furrows between rises, allowing you to sneak up on the enemy and attack from surprise. Its rate of fire is a problem, however, as reloading its magazine can take a rather long time when in combat, and if you change ammunition during a fight, the magazine will be changed out immediately after the next shot is fired, not when the magazine is emptied.

The main armament of the Pz.II C is the 20 mm KwK 30 automatic cannon. With the ability to access HVAP capable of penetrating 48 mm at point blank range, combined with its magazine-loaded rapid fire, the 20 mm can puncture through most enemy armour at this battle rating range like it is fabric.

The biggest problem with the 20 mm autocannon is the 10 round magazines combined with a 7.8 s stock reload time, meaning that the tank may successfully take out two or three enemy tanks with controlled bursts, but is likely to be taken out during the reload. Another problem to consider is in the powerful HVAP ammunition, in that its impressive penetration statistics can make the gun reach out to about 200-300 metres, but the penetrative power drops off rapidly after that due to velocity drop, even more so than the standard PzGr round.

Mounted opposite to the 20 mm autocannon is the MG 34, which is loaded with a 50-round belt with an AP-I/AP-I/AP-T ammo pattern. With 13 mm of maximum penetration at point blank range, this MG's high rate of fire will make short work of unarmoured vehicles like truck-based SPAA, as well as exposed enemy crewmen.

The main key to success with this vehicle is to drive aggressively, trying to get shots at relatively close range (100-300 m or even less). Aiming for the enemy's weak spots, it is often possible to set your opponent on fire, allowing the Pz.II to take on vehicles beyond its battle rating.

Where possible, try to use the terrain to remain hull down. Even the smallest undulations are quite often enough to mask your hull, allowing you to take quick shots with minimal risk. However closing the distance quickly with your opponent is really the only way to reliably destroy the enemy, as your armour is not enough to bounce a shot in a close-quarters fight.

In 1934, the development of the new German tanks, which would be the Panzer III and Panzer IV, was falling behind schedule despite an urgent need for tanks. As a stopgap solution until the designs was finalized, the Germany Army submitted a request for a new tank, giving the responsibility of designing to Krupp, MAN, Henschel, and Daimler-Benz.

The product was a design that is based off the German Panzer I light tank, but was larger with the addition of an extra bogie wheel and had a 20 mm autocannon as its main armament. The finished tank was designated the Panzer II and production was to start in 1935 but did not start delivering tanks until 18 months later. At this time, it was in a low rate production status by 1936 in the Panzer II Ausf. C variant. In the 1940s, the Panzer II was upgraded to the Panzer II Ausf. F, which entered into production in 1941 with increased armour and a torsion bar suspension system. A total of 524 Ausf. F were produced between March 1941 to December 1942.

The Panzer II Ausf. F had a 35 mm front armour and 20 mm side armour compared to the 14 mm all-around armour on the Ausf. C. The 20 mm autocannon on the turret was the same, based off the 20 mm FlaK 30 then in use with a firing rate of 600 rpm from a 10-round magazine. The tank also came with a coaxial machine gun as well. The turret was hand cranked by the commander, who doubled as the gunner of the tanks. The crew of the Panzer II consist of three people, the driver, commander, and loader who doubled as a radio operator. The Panzer II Ausf. C could reach a speed of 33 mph with its torion-bar suspension

The Panzer II would serve in the initial stages of World War II in the Battle of Poland, France, and Operation Barbarossa as Germany's most numerous tank (By May 1940, there were about a thousand Panzer Is and IIs, but only 381 Panzer III and 290 Panzer IVs). The Panzer II also saw service in the German Afrika Korps (Deutsches Afrikakorps, "DAK") during the Northern Africa campaign. By 1941, it was clear that the Panzer II was starting to become obsolete, and with the increasing quantity of Panzer IIIs and IVs, the Panzer II was relegated to reconnaissance duties when going against the Allies.

Despite the up-armouring in the different Panzer II variants, the Panzer II could still be penetrated by the most towed anti-tank weapon in service at the time, leaving the crew at risk to enemy fire. By 1942, it was largely removed from front lines and production ceased by 1943. The turrets of these obsolete tanks were used as gun turrets on defensive bunkers on the Atlantic Wall, and the chassis stayed in use for other purposes, such as a self-propelled gun and tank destroyer in the Wespe and Marder II respectively.

Some of the Pz.Kpfw IIs were sent to Africa, where they were used by the German Afrika Korps (DAK). In Africa they were given secondary tasks such as guard duty and scouting. The tank is shown with desert camouflage and the famous symbol of the African Corps, the palm tree.