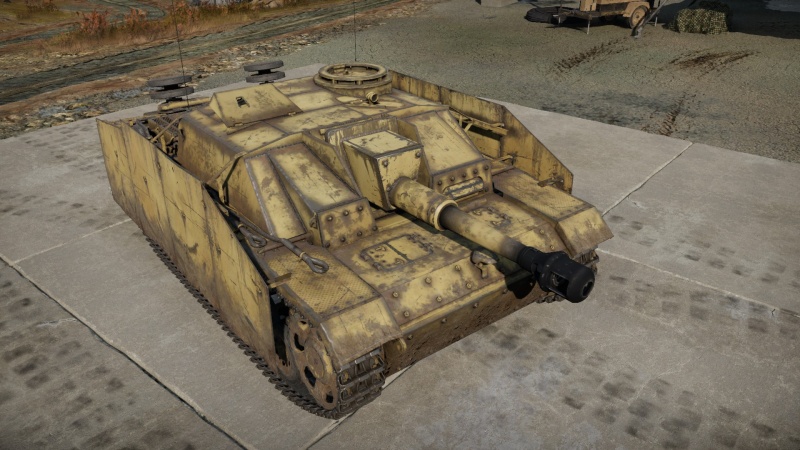 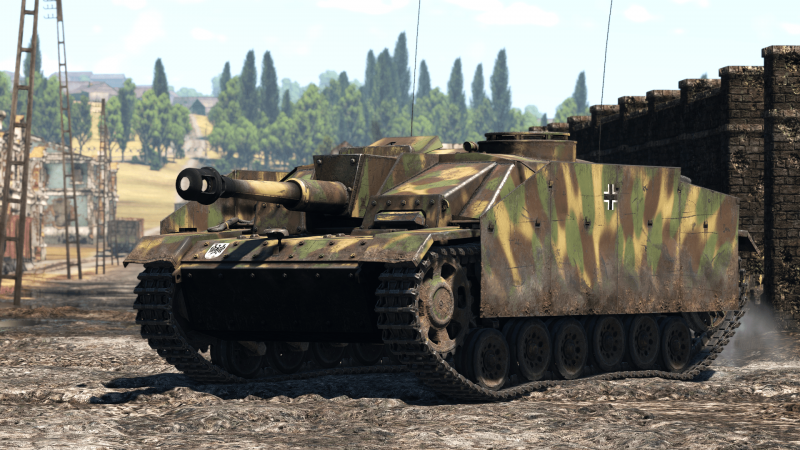 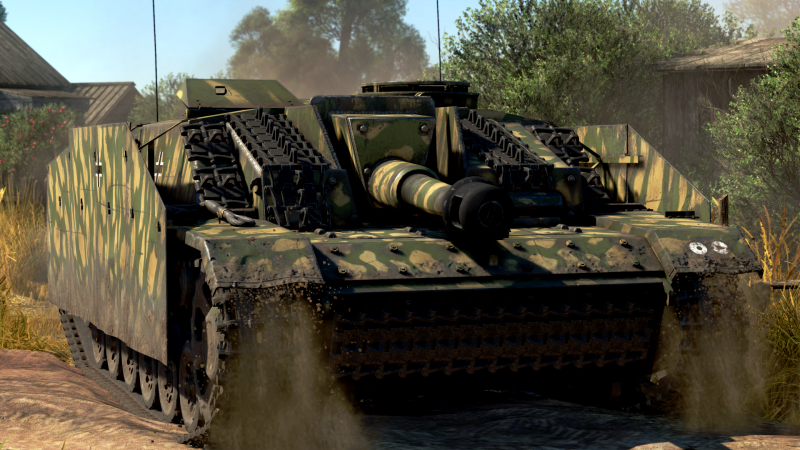 While the StuH 42 bears much resemblance to the StuG III A and StuG III F, its playstyle is much, much different. While StuG is most effective at medium to long range combat, StuH is much more suitable for medium to very close range (mostly in RB).

The reason is its gun - it is equipped with a large 10.5 cm howitzer. The shell velocity is lesser than that of StuG, but they can cause crippling damage with a single hit. Due to low muzzle velocity, shells often fail to hit moving tanks, often requiring to get closer to the opponents. Fortunately, StuH frontal armour is reasonably good, being mostly 80 mm with several weakspots of 30 mm thickness, and good mobility of Panzer III chassis now becomes even more useful.

The armour of StuH 42 G is semi-reliable. It has a very strong frontal armour of 80 mm RHA, but there are quite visible angled plates of only 30 mm thickness, which only become more vulnerable when fighting tall tanks. The cupola is 50 mm thick and will generally deflect stray shots. Generally, at 600 m range while being on a high ground or slightly angled upwards, StuH can mostly ignore tanks firing at the front. It is important to avoid angling the hull downwards, as this makes weakspots to be penetrable even with autocannons.

Technically, the frontal weakspots can be made stronger with "add-on armour" in form of tracks, but at point blank range this won't be much of help.

The greatest vulnerability of StuH 42 G is its roof, which is only 11 mm thick. While most tanks only have 9 mm of penetration with their HE shells, pretty much any enemy with a big gun can breach the roof by hitting the cupola, with SPGs also often being able to overpressure even the angled frontal plates.

The sides protection is overall terrible and even reserve tanks can take out this SPG by flanking it, so it is of utmost importance to control the entirety of the space enemy tanks can fire from. But, the sides do have the side skirts, which will stop HESH and might derail HEAT.

Many players will ask themselves which round to main, for newer players, considering the inaccuracy of the stock gun, HEAT is a good choice as it will penetrate most armour and is easy to use.

In order to maximize survivability, bring in only 25 shells, as otherwise almost any penetration on the right side becomes fatal. About 12 HEAT, 5 APHE and two smoke rounds is a good idea for general melee combat, while 23 HE and 2 HEAT (for enemy heavy howitzers) can be loaded when all accuracy upgrades were researched and the safety of the flanks is guaranteed. 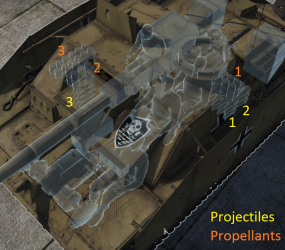 Ammo racks of the StuH 42 G

The StuH 42 G boasts a front armour which, if used correctly, can become impenetrable to most enemies it encounters at its battle rating. With the Add-on armour modification, the StuH's armour is brought up to a minimum of ~40 mm and maximum of ~90 mm RHA with quite good angles, when this armour is supplemented with medium range or slight angling, only SPG and several medium tanks will manage to crack through its defences without using HE. The Sturmhaubitze 42 performs best in urban or spaced hills environment, where the poor gun depression and low shell velocity won't matter as much and it can just terminate any tank trying to get past or attempting to fight it.

The StuH can also do very well at close range as a "Heavies Killer" as its strong frontal armour will protect it against the guns carried by heavy tanks around this BR and the HEAT round will defeat even thicker armour, making the StuH a real headache to Matilda, Churchill and KV-1 tankers. Another strategy for close-quarters engagements is to wiggle the tank from side to side while engaged in a 1-vs-1 frontal battle. This will make it more difficult for stationary enemies to hit any weak spots on the front plate as they cannot get an accurate shot off.

A very important thing to keep in mind is to never expose the StuH's weak sides to the enemy as they are only 35 mm thick (with the side skirts), so even the weakest guns and SPAAG autocannons can take you out from the side. Therefore, avoid crossing a long sightline as any enemy covering it will easily destroy the StuH 42 G with a well aimed shot at the side. Against multiple tanks, with thoroughly planned out positioning it becomes possible to fire over cover by using a rangefinder or AB aim assist to avoid being shot by 3 tanks from multiple directions at once, particularly if they also have SPG on their side.

When facing a tank from the side, especially if you don't know the tank layouts, it is recommended to aim for the engine first (particularly if HEAT is loaded) this way the enemy won't be able to flank you or escape. After that, retreat into cover and load APHE and fire in the side to destroy the enemy with the massive explosive filler (or just use HE, if you know how to aim it).

When facing a tank from the front use HEAT to disable their driver and/or gunner and/or transmission then aim for ammo or other crew members.

Where to shoot common foes:

Technically, if your gun supports HE shells and they can penetrate more than 12 mm of RHA, then you can just fire it at its cupola and the fearsome tank destroyer will explode. This is easier said than done when the said SPG is looking at you and awaits for your move, particularly in AB, so try to blindside it. In AB, if you are using any SPG which has shells of muzzle velocity below 475 m/s, you can simply use aim prediction to attack it like a mortar out of cover without exposing the hull (by aiming white crosshair at it or simply setting the gun zero to the enemy position), which will allow you to either destroy them without being put in danger, or at the very least concern the enemy and make them move away.

If your gun is too weak to deal with the StuH's front or roof armour (which most are), and the StuH is unaware of your presence, it is best to wait for it to expose its side, then take a shot at the rear part, in order to knock out the engine - preventing them from swinging their hull around and positioning their thick front armour and fearsome 105 mm howitzer. Then it is just a matter of finishing it off: from the left side simply fire at the front/middle section, to decimate the three crew members there, thus destroying the StuH.

From the right (after disabling the engine), try to shoot the very front upper section, hitting the frontal ammo rack and very likely detonating it.

If a head-on encounter is inevitable, aim for the driver's port, a penetration there will knock out 3 out of 4 crew members - instant destruction. However, few guns can penetrate a well prepared StuH, especially on a sniper position, so a head-on encounter should be avoided at all costs. 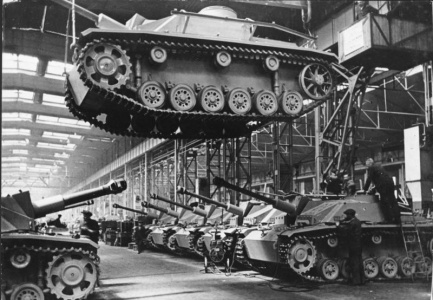 A modified version of the StuG self-propelled assault mount adapted to strike undefended targets, including those beyond direct firing range. The first models of the vehicle armed with 105 mm howitzers were assembled in October, 1942, and on November 22 they were used in combat by the 185th Assault Artillery Division.

The first vehicles were based on the StuG.III Ausf.F8. However, all other vehicles were assembled on the basis of the StuG.40 Ausf.G, whose chassis was a better fit for the 105 mm howitzer. The vehicles with this modification were built at Allket's factories right up until April, 1945.