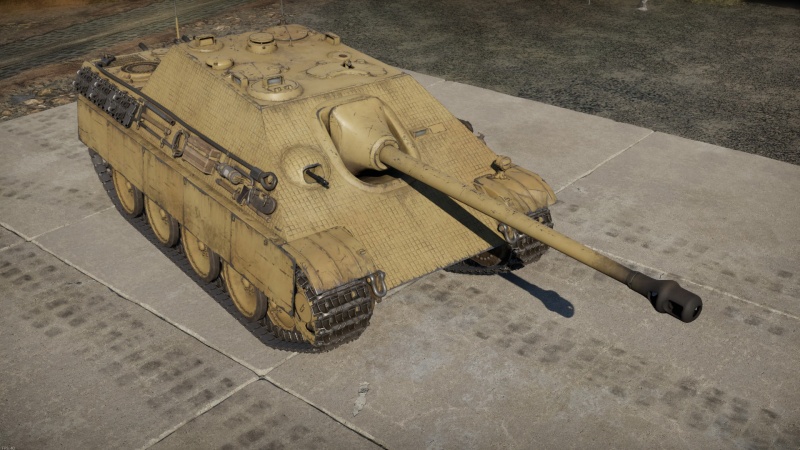 The Panzerjaeger-Befehlswagen Jagdpanther Ausf.G1 (Sd.Kfz. Index: Sd.Kfz. 173) is a premium rank IV German tank destroyer with a battle rating of 6.3 (AB) and 6.0 (RB/SB). It was introduced during the Closed Beta Test for Ground Forces before Update 1.41.

As a premium vehicle, all modifications for the Bfw. Jagdpanther G1 come unlocked. 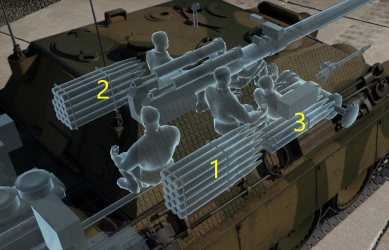 The formidable 8.8 cm Pak43 anti-tank gun was created as a longer version of the 8.8 cm KwK36. Two attempts were made to fit this gun onto a self-propelled chassis, the first was thePanzerjäger Tiger (P) Ferdinand (later Elefant) and the second was the Nashorn. However, the Ferdinand was too heavy and unreliable while the Nashorn chassis was too small and underpowered to propel such a gun. The Jagdpanther was proposed in late 1942, as a tank destroyer mounting the formidable 8.8 cm Pak43, built on the Panther chassis with good armour and speed. The tank destroyer was created and designated SdKfz 173 and was demonstrated to Hitler on October 1943. Production then started in January 1944 under the simpler name Jagdpanther, which Hitler preferred over the longer 8.8 cm Pak43/3 auf Panzerjäger Panther.

Throughout its production life of January 1944 to 1945, a total 415 of these vehicles were made. MIAG produced 270 from January 1944 to the end of the war, MNH produced 112 from November 1944, and MBA produced 37 from December 1944. The supposed goal was 150 Jagdpanthers produced per month, but Germany's deteriorating situation made this impossible. The Jagdpanthers were made in two variants, G1 and G2. The G1 had a small internally bolted main gun and modified Panther Ausf. An engine deck while the G2 had a larger simplified, outer bolted mantlet with a modified Panther Ausf. G engine deck. A proposal to mount the 12.8 cm Pa 80 was considered but never produced.