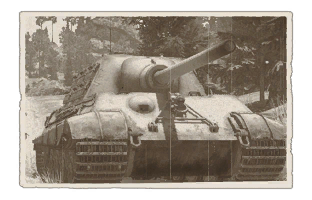 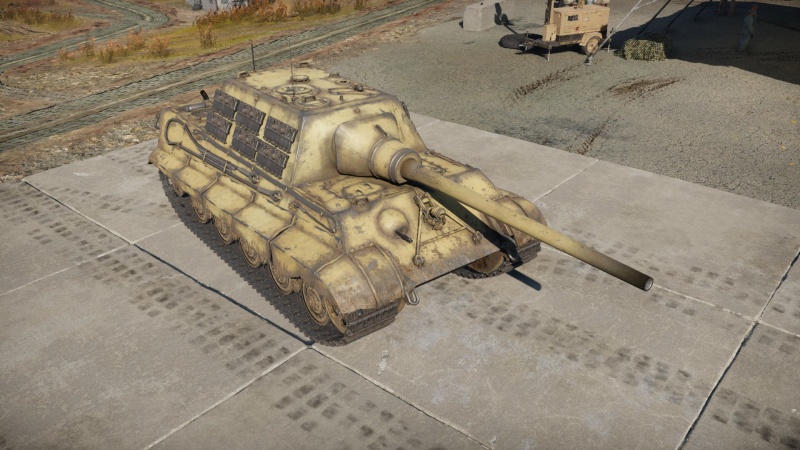 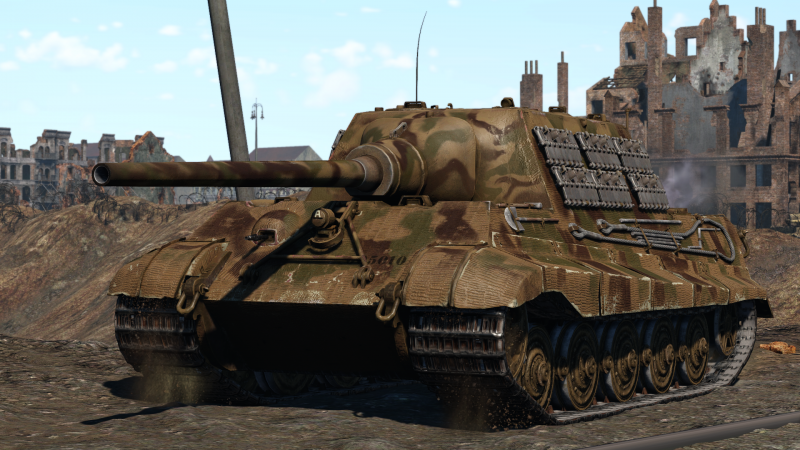 The Jagdpanzer VI Jagdtiger (Sd.Kfz. Index: Sd.Kfz. 186) is a rank V German tank destroyer with a battle rating of 7.3 (AB) and 6.7 (RB/SB). It was introduced during the Closed Beta Test for Ground Forces before Update 1.41.

The Jagdtiger is a heavy tank destroyer, designed to take out targets from a distance, this is shown as in-game the tank truly shines at long range combat where manoeuvrability and weak spots don't become as much as a threat, but the biggest benefit for long-range firing is the 128 mm PaK44 L/55 main cannon, this gun can pierce over 200 mm of non-sloped armour at 2,000 m with APCBC rounds. The PaK44 was the largest anti-tank weapon in service during World War II, nothing rivalled its penetrating capability nor its combat range, and it was easily capable of taking out any fielded allied tank in a single hit. As it was essentially a modification of a naval gun, the ammunition was still 2-part (shot and charge) and could be fired with less charge for close range high explosive shells.

At mid-long range is invincible versus APHE & the majority of HESH ammunition, only APDS & HEAT can penetrate it frontally. Common enemies are the end of the line T-10M and the American M103 both of which can pierce any part of tank armour with ease. Fortunately, pure armour strength limits the amount of spalling. 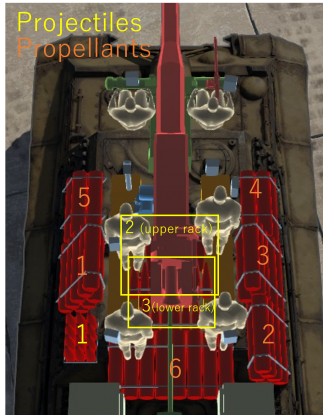 Ammo racks of the Jagdtiger

Inherent as any other tank destroyer: limit the avenues of approach for your enemies with either obstacles or distance and try to pick off targets one-on-one and not several at the same time. Despite its heavy armour, the Jagdtiger should retreat after every shot, if the opposition possesses weapons with penetration defeating 180 mm of armour, or else the lower plate will provide a big target. Make sure to take each corner with plenty of momentum though, if an enemy destroys the tracks or transmission during a turn, the remaining momentum will carry the Jagdtiger into a firing position or to safety.

Obviously, close-quarter-combat (CQC: Urban areas, cities, ravines, etc) should be avoided as they invite ambushes to the very weak side of Jagdtiger. Of course, narrow passageways can also be turned into choke points (see above).

Sitting at an uneasy battle rating, the Jagdtiger meets opponents with guns that can go through its armour much less regularly in Realistic and Simulator. However, the British 20-pounder, also quite common at this rank, has an APDS shell that can go through your armour easily at medium range. However, other than up-tiers or tank destroyers firing HEATFS, no conventional rounds can really go through your armour in RB/SB. However, in arcade, its higher BR will make it face more modern opponents.

Foes able to frontally penetrate the Jagdtiger in hull down position (hiding the lower glacis) are labelled in ☠red.

Due to the potency of the 128 mm APHE shell, specific modules must not be a target. A successful hit into the crew compartment will result in any tank exploding.

This monster of a tank destroyer was inspired by the successes of previous tank destroyers such as the StuG III and the Marder series. Their efficiency in a battle called for a request by Army General Staff to mount an enormous 128 mm gun on a self-propelled vehicle for infantry support in early 1942, but then Hitler changed it from its intended role to a tank destroyer. The 128 mm design was chosen as toolings already existed for the calibre, as it originated from a naval cannon design, which also was used the basis of an anti-aircraft gun. The 128 mm cannon also had a very high hit rate when compared to other formidable calibres like the 105 mm and 88 mm.

In early 1943, the armoured chassis that was to carry the 128 mm gun was to be either the Tiger I or Panther. However, early modelling showed that the integration of the 128 mm onto the Panther chassis was unsuitable. On October 20, 1943, the design was changed to use the Tiger II chassis and a wooden model was constructed for presentation to Hitler. Approved for further production, two prototypes were produced by Porsche and Henschel. Porsche version had an eight-wheel suspension system while the Henschel version had a nine-wheel overlapping suspension system similar to the Tiger II construction. The rest of the body was consistent to the current German tank destroyer designs, an armoured casemate structure was used to hold the new 128mm Pak 44 L/55 gun. The prototypes were completed and presented in February 1944, and were approved for service, earning the designation Jagdpanzer VI, but was later renamed to Jagdtiger. 150 of these Jagdtigers were ordered by the army, but only 88 (at most) were produced before the end of the war. Eleven of the Jagdtigers used the Porsche suspension system while the rest were using the Henschel suspension system.

What made the Jagdtiger very special was its enormous gun, the 128 mm Pak 44 L/55. At its introduction, no allied armour could withstand the shell it fires, and though the same lethality could be shared with the Tiger II's 88 mm Pak 43, it has a much greater effective range of over 3.5 kilometres (though a variant of the Jagdtiger was equipped with the 88 mm Pak 43 due to 128 mm gun shortages, this never entered service). The gun could penetrate an enemy tank hiding behind cover, such as a house, shooting right through the house and hitting the target on the other side. A disadvantage of the gun was its two-part ammunition, the shell and the propellant, which increases the loading time of the gun. The armour of the front of the Jagdtiger was 250 mm and 150 mm on the glacis plate. Like almost every casemate design, the Jagdtiger suffered from lack of turret traverse and must have the entire vehicle rotate when a target moves out of its traverse range. The Jagdtiger has the distinct title of the heaviest armoured fighting vehicle produced, weighing about 71 tons, but like most of Germany's heavy armoured vehicles late in the war, the Jagdtiger also suffered mechanical and mobility issues. The heavyweight caused it to be slow and was easy to break down if the vehicle had to rotate to aim the gun, due to the heavily strained transmission and suspensions. Also, the gun had to be locked down (cannot traverse) when not in use to avoid wearing out the mounting brackets, and a crew member had to exit the vehicle to unlock it before firing.

The Jagdtiger was first issued on September 1944 to the Western front in the hands of the 512th and 653rd Heavy Panzerjäger Battalions. Otto Carius, a Tiger Ace, commanded the 2nd Company of the 512th to defend against the Allied offensives. He comments that the "Jagdtigers could not be brought to their full potential on the battlefield due to many pressing issues". The two most pressing issues of the Jagdtiger was the mechanical failures and lack of crew training on the heavy beasts. The mechanical issues forced many Jagdtigers to be disabled and eventually destroyed by their own crew as they abandoned it. Only 20% of the Jagdtigers on the Western Front were lost in combat, the rest was due to the mechanical failures or out of fuel. Crew training was insufficient with the Jagdtiger and so was morale, Otto Carius noted that two Jagdtigers failed to fire on Allied armour more than a mile away in fear of an air attack, even though they were well concealed, and both broke down as they tried to withdraw from the fear of air attacks. One was disabled when it fell into a bomb crater and another was lost because of friendly fire from Volkssturm, as they had never seen a Jagdtiger before. In another instance, a lone Jagdtiger engaged an American tank platoon. When the tank platoon opened fire, the Jagdtiger withdrew not by backing up, but turned around due to inexperienced crew training, exposing the weaker side armour and was destroyed. Eventually, Otto Carius' company was surrounded in the Ruhr pocket and he ordered the guns of the surviving Jagdtigers destroyed and to surrender to the Americans. Of the ten tigers in Otto's 2nd Company of the 512th battalion, one was lost to friendly fire, another by combat, and the rest by breakdown or crew destruction. The total American armour kills reached was ten American tanks, making one Allied tank loss for each Jagdtiger loss.

Though Otto's memoir left a sour note on the Jagdtiger's combat effectiveness, it had some success. On January 17, 1945, two Jagdtigers engaged fortified positions near Auenheim with no loss. The next day, they engaged four bunkers at a distance of 1,000 m. The combat had 46 high-explosive and 10 armour-piercing shells fired on fortifications and tanks, the Jagdtigers were able to destroy a few Allied bunkers and tanks with no losses. Then in April 1945, 512th Battalion saw lots of action when the 1st company engaged Allied tanks and trucks on April 9th, destroying 11 tanks and over 30 other AFVs, the distance of engagement was more than 4,000 m and ended with only one Jagdtiger lost due to an air attack. The next few days, the 1st company proceeded to destroy five more Shermans before surrendering at Iserlohn. All activity of the 512th Battalion ended with the surrender of the last of the 2nd company April 15th in the same city.

The Jagdtiger's impact on the war for Germany was negligible. There were not enough of them to change the course of the situation for Germany, plus the kill-to-loss ratio makes its production waste of resources when much better models like the StuG were able to get even higher combat performances for a much more economical cost. It represents one of Germany's last attempts to model the belief that more armour and more firepower could equal success in a battlefield against a numerically superior enemy.

Today, three Jagdtigers survive in museums. One is in Bovington Tank Museum in England, which is one of the 11 Porsche-suspension version and was captured in April 1945 by the British. Another is a Henschel-version at the National Armor & Cavalry Museum in Fort Benning, Georgia of America after being moved from the US Army Ordnance Museum, this was captured in March 1945. The last is in Kubinka Tank Museum in Russia, a Henschel-version that was captured on May 5, 1945, in Austria and is in the best mint condition of the three survivors.