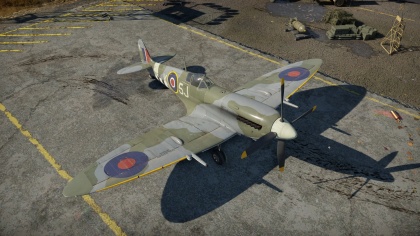 The Plagis' Spitfire LF Mk IXc is a gift rank IV British fighter with a battle rating of 5.7 (AB/RB) and 5.0 (SB). It was introduced in Update 1.49 "Weapons of Victory". The plane is painted after the camouflage scheme of the plane used by Southern Rhodesian pilot John Plagis of the No.126 Squadron, Royal Air Force.