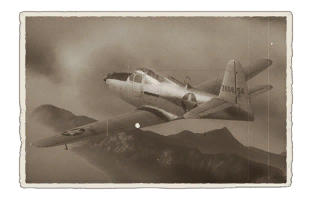 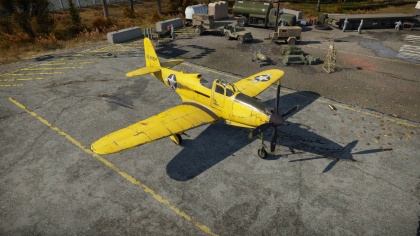 This aircraft is a good all altitude fighter. The P-63A-10 can out-climb most of its opponents, un-upgraded, although "side-climbing" is recommended when the higher altitudes are reached. Its straight line speed, especially at higher altitudes, is respectable, competing with Bf 109s of the rank. This aircraft has a poor turn-time at slower speeds, but as with most US aircraft, its high-speed performance is significantly better than the aircraft it faces (except perhaps the I-185), making it a good Boom & Zoom aircraft. Tactically, the aircraft is good for small dives against turn-fighting opponents on the tail of your allies, from around 1,000 m or less above the target. Keeping any "side-climbers" down is normally good since the speed and rate of climb allow the P-63 to catch these planes and send them back down.

The improved 37 mm gun improves damage to aircraft since the 4 x 12.7 mm Brownings are not greatly powerful at the higher ranks- the 37 mm gun compliments the 12.7 mm machine guns as a good bomber hunter, combined with the sleek profile of the aircraft.

The P-63A-10 can be configured with the following ordinance:

An interceptor in any respect. Unlike most American designs the Kingcobra lacks heavy payload for ground attack duties. While the 37 mm can load anti-tank rounds, the plane will lose its excellent anti-air HE shells. Of course, the 12.7 heavy machine guns can be used against planes, in a ground attack role they are rather used on soft targets, as the AP shell lacks high-explosive damage radius to deal with AAA & SPAA quickly. The AP shells also require more accuracy while shooting and thus are inferior to the .50 cal Brownings on range e.g. with the HMG effective fire against light targets is possible from 600 m, but with the 37 mm AP shells, this needs to be reduced to 400 m.

The aircraft is not intended, nor should be used, as a ground attack vehicle, since it can only carry three, 500 lb bombs, which is a respectable amount, but the ammunition count for the 12.7 mm guns is not great, 250 rpg. The 37 mm gun can be used as ground attack, although this tactic isn't preferred by some as it reduces the ammo count as a whole for the aircraft, which is one of its limiting factors in combat.

Deliveries of production P-63As began in October of 1943. However, the US Army examined the P-63A at Eglin Field, Florida and concluded that it was unsuitable for service with the USAAF as a combat aircraft, even though test pilots spoke favorably of its characteristics, and its performance was comparable with that of other fighters of the time. Nevertheless, the Soviet Union had a need for a high-altitude fighter (where the P-39 was deficient), and it was thought that the P-63 might be a natural choice for them, combining good high-altitude performance with excellent ground attack capabilities using the 37-mm cannon.

The initial production block was P-63A-1. It was virtually identical to the XP-63A production prototype. It was fitted with 87.7 pounds of pilot armor and had an internal fuel capacity of 100 gallons. It was armed with a type M-4 37-mm cannon fed by a 30-round magazine. There were two synchronized 0.50-inch machine guns in the nose with 270 rpg, and two underwing 0.50-inch guns with 250 rpg. A centerline underfuselage rack could carry a 75-US gallon auxiliary fuel tank or a 500-lb bomb.

The P-63A-5 introduced a dorsal radio mast, which became standard on all later models.

The P-63A-7 was fitted with an Aeroproducts propeller of slightly reduced diameter. An increase in wing loading limited this variant to a 64-gallon tank under each wing. The nose gun mounts were modified, elevator chord was increased by two inches, and the span of the horizontal stabilizer was increased by 16 inches to 14 feet 7 inches.

The P-63A-8 featured 188.8 pounds of armor. An improved version of the Aeroproducts propeller increased maximum speed to 417 mph. Water injection was added to the engine, which was incorporated in all subsequent Kingcobra versions. A Type N-6 gun camera was added. Ammunition for the two wing guns was decreased from 250 to 200 rpg.

The P-63A-10 had rocket rails fitted underneath the wings. The weight of the armor increased to 236.3 pounds.

Production deliveries of the P-63A began in October of 1943, and by December of 1944 1725 P-63As had been produced. The USAAF never saw fit to use the Kingcobra for operational combat missions, since by that time in the war the need for low-altitude close-support fighter aircraft was more than adequately filled by such aircraft as the P-47 Thunderbolt. Nevertheless, P-63As did serve for a few months with the 31st, 444th, and 445th Squadrons while they were based Stateside.

Most of the P-63As that were manufactured at the Buffalo plant were immediately ferried to the Soviet Union. Upon completion, the P-63s would be rolled out of the factory and ferried from Niagra Falls to Selfride Field, Michigan. After refueling, the would be flown to Truax Field in Madison, Wisconsin where Soviet ferry pilots (usually women) would pick them up and fly them to Edmonton, Anchorage and then across the Bering Straits to the Soviet Union. The Russians used the Kingcobra primarily for close-support and ground strafing. The Kingcobra had a relatively good low-altitude performance and had the ability to absorb a lot of battle damage and still remain flying. It proved to be a potent ground attack aircraft and tank-buster, but it never received the amount of attention in the Soviet Union as did the Ilyushin Il-2 Shturmovik.

The P-63A never served in combat with US forces. US Kingcobras remained stateside for use by the Army in training. Many of these P-63As were converted into RP-63A target aircraft.

The Paul Garber restoration facility of the Smithsonian Institution in Suitland, Maryland has a P-63A on display. However, I was not able to get close enough to this plane to record its serial number.

I also seem to remember a P-63A being on display at the Champlin Fighter Museum in Mesa, Arizona. I remember it as being painted in Russian insignia. However, I have no information about its serial number.

Serials of the P-63A were as follows: