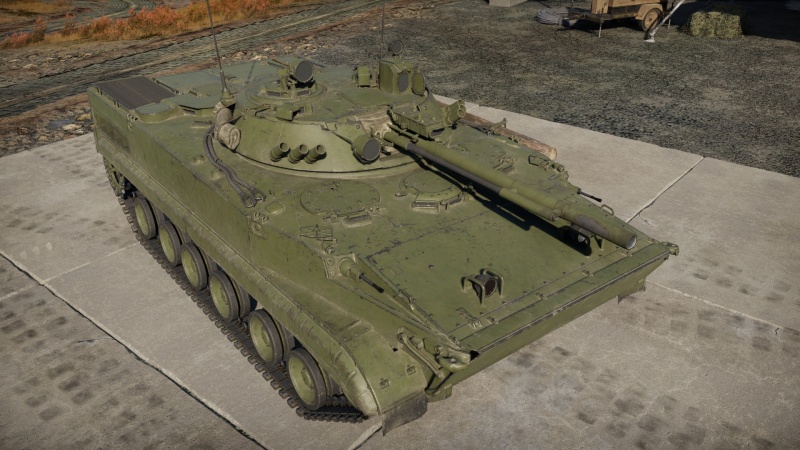 The survivability of the BMP-3 is very low. It has only 3 crew members who are closely spaced together. This means that most penetrating rounds will destroy the BMP-3 in one shot. Additionally, the BMP-3 is subject to the overpressure mechanic, so it will often be destroyed instantly when a large-calibre HE round detonates next to it. There are some empty spaces in the BMP-3 like the fuel tank in the front or the area in the back above the engine (where infantry would sit), but these would only be hit when directly side on with an enemy.

100 mm 2A70 cannon
Two-plane stabilizer
Reduces the swing of the gun in two planes while moving
Autoloader
Automatically feeds projectiles into the breech. The speed does not depend on the skills of the loader
Ammunition48 rounds
First-order22 rounds
Reload4.0 s
Main article: 2A72 (30 mm)

When spaded the BMP-3 has access to a variety of powerful tools. The tandem warhead ATGM has excellent speed and penetration, although it still has a slow reload. The tandem warhead can easily penetrate even vehicles protected by ERA bricks. The APDS belts on the 30 mm can easily penetrate the sides of most western MBTs. The thermals can even see through the ESS that the BMP-3 can lay down, so this may be used against vehicles without thermals. Despite these advantages, BMP-3 commanders should play carefully, as the ATGM reload still means that engaging more than one target at once will likely end in a quick trip back to the hangar. This is not helped by the fact that the BMP-3 has little in terms of armour and survivability. The two strategies that will be most effective for the BMP-3 are to either try and flank enemies and take them on one by one up close, or use tandem warhead ATGMs to engage at longer ranges. However, long range engagements will not result in many kills, because enemies may have a chance to move to cover before the ATGM has reloaded. Sometimes it would be better to use your better HE shell (3OF70) and fire them at enemy's that are hull down or completely covered by objects like rocks. This works perfect in maps with opposing sniper spots or when see the radar of a SPAA in their safe zone. The low muzzle velocity combined with laser rangefinder allows to make shots that are impossible to do for other vehicles. The BMP-3 has few upsides to comparable tanks (BMP-2M) and many severe downsides and requires a very passive type playstyle to use effectively.

The hull has a similar shape to the BMP-1 and BMP-2 but the internal layout is different. The engine was placed at the rear right side of the vehicle, the driver sat at the front center, two infantry behind him, then the two man turret, and then the crew compartment at the rear. To dismount the vehicle, the infantry had to climb over the engine and out the rear doors. The armour protection is against 30 mm autocannon rounds at the front and 12.7 mm machine gun rounds on the sides and rear, when add-on armour kits are added. There are ERA kits that can be equipped as well. Main armament consists of a 2A70 100 mm gun - which can fire ATGMs - and a co-axial 2A72 30 mm autocannon. Secondary armament consists of a co-axial 7.62 mm machine gun. The armament is housed in a round, centrally mounted, turret. Power is provided by a UTD-29 450 hp engine, while later in production it received a UTD-29M 500 hp engine. The BMP-3 is also amphibious, propelled by its spinning tracks.