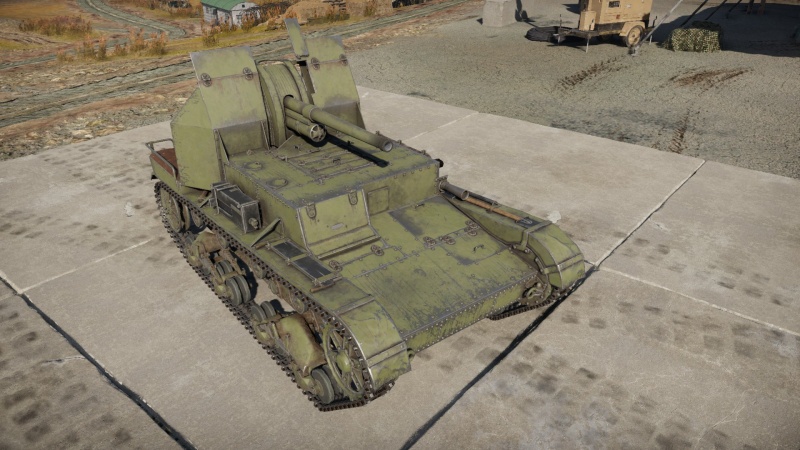 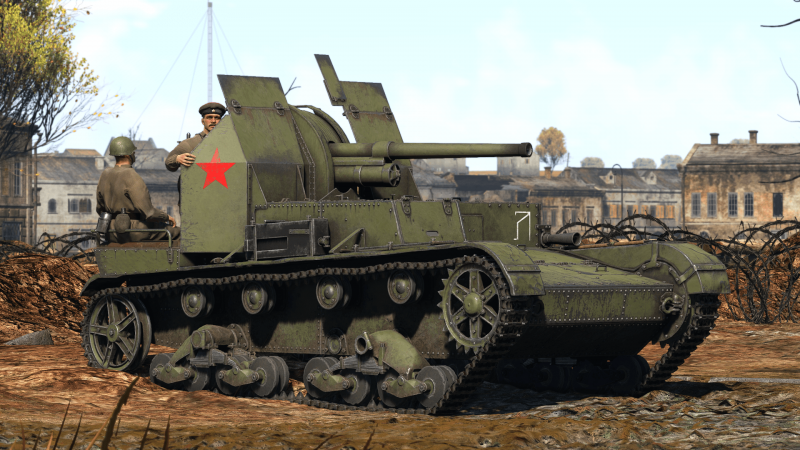 The SU-5-1 is a crude SPG built off the T-26 chassis. The T-26 chassis of the SU-5-1 allows it to place itself with relative ease on any spot on the map. The high gun shield can lure the enemy into firing too high, missing the crew. If a hit goes into the body, with a bit of luck, APHE ammo will not detonate on contact and instead go straight through, leaving little spalling damage. The vehicle's crew of 5 will allow some casualties before the loss of efficiency.

Given the very thin armour on the hull and gun shield, this vehicle is a textbook example of a glass cannon. The T-26 chassis has mobility, but due to the top and back having no armour, stray artillery strikes can easily decimate the crew members. The SU-5-1's all-round armour protection, being around 15 mm, is inadequate against anything other than rifle-calibre bullets. Any cannon is able to easily tear through the thin sheet of metal and hurt the crew/modules inside. Moreover, any flanking light tank and strafing aircraft poses a paramount threat to the SU-5-1, since a short spray of their machine gun could knock your crew out. It is recommended to take positions where you do not have to rely on your armor.

The SU-5-1 has unsatisfactory mobility, sharing the chassis with T-26-4 and all of its poor drive characteristics. Its average speed on hard surfaces is only ~25 km/h, with very sluggish acceleration due to the weak engine, meaning it will be left behind by pretty much every other unit. This includes other low-BR SPGs, so taking the most attractive positions will be tricky. The top speed is also low, meaning it struggles in both short-range and long-range manoeuvres. The SU-5-1 is sufficiently mobile enough to climb hills or traverse muddy terrain, but will do so really slowly. Its hull traverse is also very slow, which makes it difficult to respond to flankers. It's reverse speed is slow too, at -5 km/h, is not ideal. Properly playing the SU-5-1 takes patience and a thourough understanding of the map.

The 76 mm 1902/30 cannon has above average horizontal guidance for this SPG of ±15°, allowing the SU-5-1 to fight without traversing the hull too much. The stock BR-350A APHEBC shell is able to frontally penetrate and take out pretty much any target it encounters with a single shot like the Pz.IV C, the Chi-Ha or the M13/40 (III), making the SU-5-1 a capable tank destroyer. The large explosive filler also means that if the shot is not placed well enough (e.g. hitting the very edge of crew compartment instead of dead centre) it is still more than likely to knock out most of the crew members with the post-penetration explosion, which is less precision-demanding and more beginner-friendly. A similar gun can be found on the KV-1 (L-11), being a great testament to the staying power and the capability of this gun. The gun slewing speed is adequate to keep track of targets with moderate speed, but will struggle against fast targets like the AS 42, especially if they are up close. The reload time is quite decent for the gun's power.

The biggest and most noticeable drawback of the SU-5-1's armament, however, is the extremely limited ammunition capacity of only 8 rounds. While most players are likely to die before they can fire all of that, this can be a serious issue if one manages to survive long enough and has no friendly capture points nearby. As such, the player must make every shot count. Another disadvantage is the below-average gun depression of -5°, which means that the SU-5-1 may have difficulties taking certain positions behind or on top of hills. 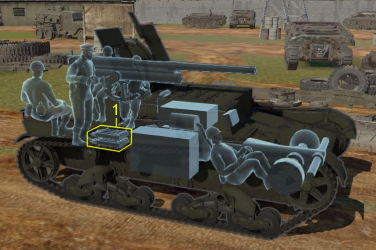 This vehicle is the perfect (and only) SPG for Soviet tech tree beginners: somewhat fragile, decently fast and carrying a gun similar to what is found in higher ranks. It is a great trainer for later gameplay.

As an open-backed SPG, it is advised to never be seen by the enemy, especially if flanked. Since the gun's ballistics are somewhat tricky to learn and the ammo count is limited, it is recommended to ambush enemies near capture points, preferably by your team's side. Aim carefully, regarding both the vertical and horizontal leading when attacking a moving target, although this is not advised if the moving target is a heavy tank or is very fast since that will make leading your heavy shells a hard task. With a capacity of 8 shells, you cannot afford to miss a shot.

As a tank destroyer/SPG, it is recommended to play as supporting fire in the rear lines of the team, never at the front but not too far back, repelling enemy assaults on the point. One tactic is to find a spot with a good view near a capture point or bury yourself in a dark alley (if you have fast reflexes since if you miss the target might be aware and attack you). Then you wait to see the enemy fall into your sights. Do not forget to move to the nearest captured point after each 1-2 enemies destroyed to reload since your ammo count is very low (sometimes you won't even have enough ammo to finish the second enemy, make sure to engage only if necessary in this case).

This role can be accomplished at any time in the game but it needs two things to be fulfilled: a captured objective nearby and a cooperative team. The objective will be your ammo and target supply since when waiting on a captured point you get an ammo refill. Ammo will be refilled one by one at roughly the same rate as your vehicle can shoot (about a minute for full loadout in this case). A cooperative team will help hold the point since you probably can't do it all by yourself. Moving means putting yourself at high risk of being spotted in a poor position. If your team loses the point, it is recommended not to rush for it since the rest of the enemy team may be following behind the person capturing the point. It is advised for your allies to help and stay hidden, taking careful shots at well-chosen enemies. Remember to move after firing a shot, since you pose a large threat in terms of firepower at that battle-rating, and the light tanks will start hunting for you if you keep camping. 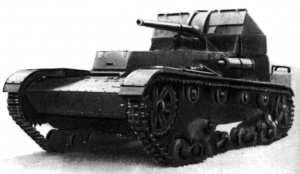 SU-5-1 (СУ-5-1) was conceived as the first of "small triplets" (малого триплекса, the other two being SU-5-2 and SU-5-3), with a goal of providing support for the mechanized troops and cavalry using a standardized chassis for multiple roles. SU-5-1 was anti-tank, -2 was howitzer and -3 provided mortar support. This was to ease maintenance and production. An estimated 5 units were built, after testing they took part in the 1939 invasion of Poland at the beginning of World War 2, however, they never fired at the Polish units.

The dated, but abundant, 76 mm divisional gun M1902 is put on a modified chassis of the T-26. The key difference includes moving the engine to the front of the chassis, to make space for the gun crew. Overall the evaluators concluded the chassis to be overweight and pressed for AT-1 instead, which in the end didn't enter into serial production either. Eventually, the Soviet army settled for T-26-4 and BT-7A (which is the basis for the in-game BT-7 (F-32)).