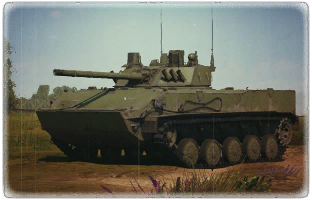 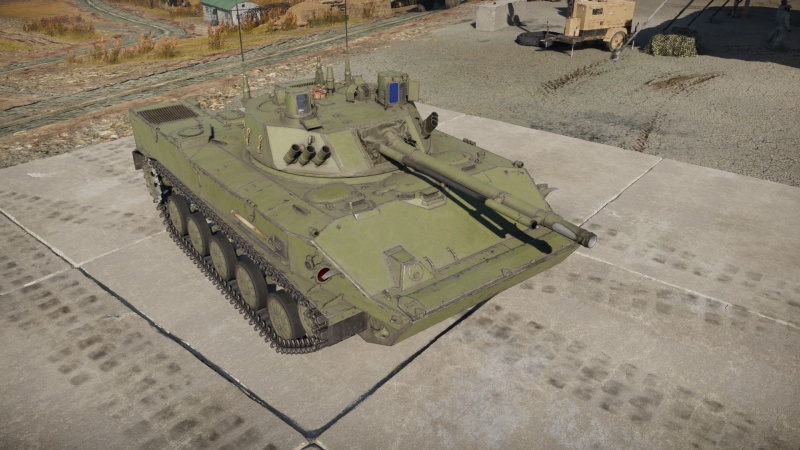 The BMD-4 is a gift rank VI Soviet light tank with a battle rating of 8.3 (AB) and 8.7 (RB/SB). It was introduced during Update "Red Skies" as a reward for the 2021 Summer Landing event. In a simple comparison to the similar-performing vehicle, the BMP-3, the BMD-4 has less armour, higher mobility and faster ATGM reload.

BMD-4 is very poorly armoured. Front has adequate armour thickness, but upper front plate of the hull is more vulnerable than the turret or the lower front plate and allow for penetrations with 12.7 mm MG, even from afar. Autocannons are very likely to just shred this tank instantly, but how soon this happens depends on enemy attention span, autocannon rate of fire and where an enemy aims first.

Researching movement modules adds some of them to the front of the tank, which reduces likelihood of taking overpressure damage from ATGM and increases chances of blocking autocannon rounds when they hit the hull.

Roof is vulnerable to even HEAT overpressure and turret hits with chemical shells are very dangerous for this tank. It is easy to strafe BMD-4 from the sky for the same reason.

There are 3 crew members, both of the turret crew members can fire all weapons, so it is not enough to take out the gunner to stop BMD-4 and it will not just explode upon being hit like Shturm-S, so at the very least it can avenge itself after being hit.

BMD-4 somewhat resembles BMP-2 in terms of mobility, but can drive equally fast in either direction and accelerates much faster.

It is possible to control suspension on BMD-4, but only a bit. Suspension controls allow to slightly tilt BMD-4 forward or backwards or lower/raise the hull a bit. Tilting is mostly important for RB, where it helps the tank to gain more gun depression on a hill, but can also be used in AB to either hide the UFP or to prevent the gun from bouncing too high up while charging.

It also can swim, like all the other Soviet light tanks.

The 30 mm fires the same shells as the BMP-2 autocannon does and is identical to the one on BMP-3. There is only one fire rate option for the cannon this time around - which is relatively slow at 300 rounds per minute. Despite low fire rate, it still fires faster than the one on the Warrior and if user fires first it can neutralize many light tanks at close to medium range before BMD-4 disintegrates from their retaliatory fire.

A note on the control scheme. Currently, the autocannon counts as the main weapon and 100 mm is fired with "additional weapon" button. The aim assist and scope is, therefore, displayed for 30 mm. While this is fine if BMD-4 user uses ATGM, but the only way to swap scope to acquire aim assist towards 100 mm to aim HE is to switch main weapon to "secondary weapon". This, unfortunately, breaks the weapon layout, and 30 mm becomes unusable until the control scheme is reset. Either way, the 30 mm counts as a "primary" weapon as of writing of this text.

100 mm 2A70 cannon
Two-plane stabilizer
Reduces the swing of the gun in two planes while moving
Autoloader
Automatically feeds projectiles into the breech. The speed does not depend on the skills of the loader
Ammunition38 rounds
Reload5.0 s
Main article: 2A70 (100 mm)

The 100 mm of this tank is near identical to the one on BMP-3. However, its autoloader can load ATGMs as well, removing the 28 second reload penalty which makes the BMP-3 unsuitable for skirmish, at a cost of 1 second of reload time overall.

While the gun is stabilized, it is not a very good idea to rush uphill at full speed until gun drives were upgraded as the gun has poor depression and kicks upwards when the tank drives uphill. Without upgrades, it will not put itself back on target in time, and the tank can't sustain even accidental hits unlike the BMP-3.

Gun itself can bring two different ammunition types into battle, although the choice are limited to chemical energy shells. The ammunition choices are: Slow HE (3OF70) , super slow HE (3OF32) and Tandem HEAT ATGM (9M117M1). It is only possible to take 4 ATGM. Overall, it is similar to the BMP-3.

HE shells are mostly designed to be fired in a mortar fashion and for comfortable use it is necessary to install laser rangefinder or to play in AB mode. Unlike with the BMP-3, it is also necessary to swap primary weapon to "secondary weapon" to be able to aim HE precisely. The projectiles fall very slowly, but they are also very small and will often squeeze in-between ERA bricks and hit the enemy tank roof, causing overpressure damage and destroying the target. Overall, they can be used to harass other tanks out of cover (including ATGM carriers) or fired along with the autocannon to blow up light tanks in general melee range (although it is very awkward and slower than with the BMP-3).

The missiles are launched at near maximum speed from the get go, which makes them ones of the deadliest at the rank (as many missiles at the BR start at around 250 m/s at best), but also make them mostly unsuitable for trick shots of any kind and require direct launch. Tandem missiles usually do not even require user to aim any more than in the enemy tanks direction. Missiles also have huge area of the blast wave, but BMD-4 cannot just destroy all of the surrounding cover as it itself is fragile and needs it to survive, so some restraint should be kept, at least until you are sure that it's possible to get away with such behaviour.

Ammunition rearm for 100 mm on a capture point takes about 6 seconds, which means that this tank can almost indefinitely spam ATGM at incoming enemies if its user can hold the line. Make sure to choose ATGM as the top ammunition in ammo distribution UI, as otherwise HE will be rearmed first.

Weapons are not rearmed outside of the capture point in AB, even if it only uses ATGMs, so the tank cannot be used as a standoff sniper in AB for long, but is rather to be sacrificed in a deep flank.

In terms of what types of ammunition to bring in, two types of combination can be made between the standard HE shells and the ATGM, as BMD-4 can only bring two selected ammo into battle:

There are two main ways to use BMD-4 efficiently, both involve using its high movement speed.

First way is to attack into a capture point by using ATGM based loadout. BMD-4 cannot sustain frontal damage and can only take one hit before exploding. It is necessary to have high reaction time, good crew and the element of surprise. Try to arrive at the fighting location first and take cover at a suitable fighting position. If you want to do something extra, it is possible to tinker with suspension to lower BMD-4 hull even more to hide as much of the hull as possible.

There is also an option of attacking not the capture point itself, but to rush past it and to attack the first encounter group, preferably from a side. If you manage to pounce on them, it is possible to take out three tanks before other enemy tanks notice that something is wrong and destroy the BMD-4.

The reason why rushing in such a fragile tank is even a viable option is because that way BMD-4 can quickly rearm after fighting and either attack by spamming ATGMs from the cap or continue its conquest elsewhere.

Second way is to deliberately give up working on a capture point and instead to do a deep flank around enemy team and unload BMD-4s entire arsenal onto enemy snipers. This works because BMD-4 moves insanely fast for a Soviet light tank and has ATGM which reloads almost as fast as the gun on the Object 906, while being absolutely lethal regardless of the enemy tank armour level. If the range between your firing position and an enemy is more than 400 m, it is also possible to continue annoying them by launching 3OF32 at them over cover (swap main weapon towards 100 mm to acquire proper aim assist on the HE).

A complex of research aimed at increasing the combat effectiveness of the Soviet airborne combat vehicle named "Bakhcha-U" was carried out in the Tula Instrument Design Bureau in the second half of the 90’s. As a result of the research, the Volgograd Tractor Plant presented an experimental BMD-4 combat vehicle with the Bakhcha-U module, which was put into service on the last day of 2004. An experimental batch of 60 vehicles was delivered to the 137th Guard Paratrooper Regiment for testing. Compared to the BMD-3, the new vehicle significantly surpassed it in terms of combat effectiveness and technical characteristics.

Much attention was paid to the complex of anti-tank armament - a 100mm cannon-launcher could use guided missiles, including missiles with a tandem warhead. During the tests of the pilot batch, the manufacturer went bankrupt and Kurganmashzavod continued work on the vehicle. During the modernization, an improved version of the IFV was created, which entered service with the Russian army under the name BMD-4M.