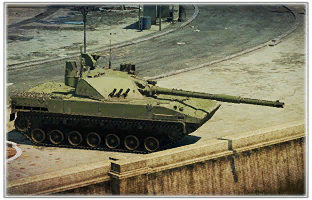 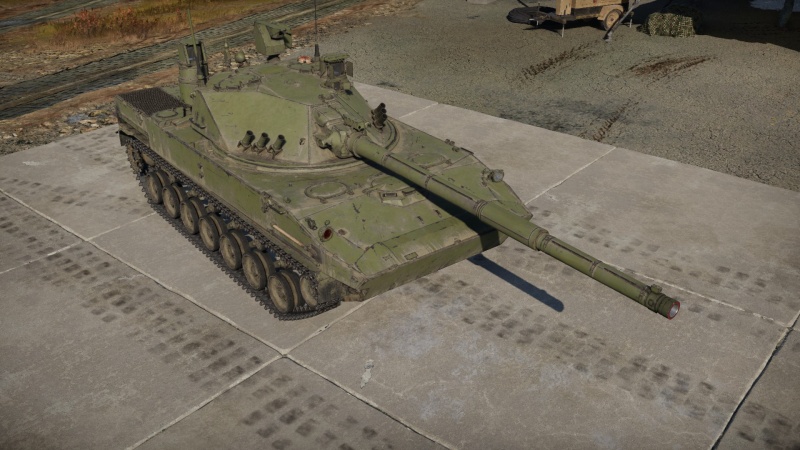 The 2S25M "Sprut-SDM1" is a modernized development of the previous 2S25 Sprut-SD and the capstone to the Soviet amphibious tank line. Although the external appearance is very similar, it is based on a revised BMD-4M chassis with the same engine and transmission as the BMP-3. Compared to the original Sprut, the 2S25M loses a significant amount of reverse speed and a small amount of horsepower, although the overall mobility remains good. The improvements are in the fire-control system, which now features thermal sights for both the gunner and commander and thus fixes one of the 2S25's original flaws. It also now has access to the powerful 3BM46 APFSDS round used by the T-80U to better deal with contemporary tanks. Although the 2S25M has impressive offensive capabilities, it routinely faces modern MBTs such as the Leopard 2A4 and M1 Abrams that lessen or negate its mobility advantage. Thus, its playstyle demands even more caution.

The 2S25M, also known as the Sprut-D, is a very capable vehicle which uses speed and agility over armor. The light armor of the Sprut tends to be a 'high risk-high reward' armor as it is only able to stop small firearms but generate little to no fragmentation from the penetration of a solid shot. However, chemical energy weapons such as HEAT and ATGMs will generate more than enough spall to defeat the crew. Armor is not to be relied on whatsoever, even against artillery fragmentation. Due to the oblique angles the frontal plates have, it is able to ricochet enemy projectiles but this is highly unlikely. One of the biggest drawbacks of the Sprut-D are the side-mounted ammo racks. In case of a successful penetration, these will be the first to detonate. It is advised to remove this racks to increase survivability of the platform. As with previous Russian light armor, the best armor is to not be seen by the enemy.

Amphibious
The design allows you to swim and control movement in the water
Controlled suspension
It is possible to adjust the ground clearance or more complex suspension positions
Speedforward / back
AB78 / 23 km/h
RB and SB71 / 21 km/h
Number of gears8 forward
4 back
Weight18.0 t
Engine power
AB954 hp
RB and SB500 hp
Power-to-weight ratio
AB53.0 hp/t
RB and SB27.8 hp/t
The Sprut-D leaves nothing to expect, high mobility and country-cross capabilities with a very powerful engine and reliable transmission. As seen in tanks based on the BMP-3 hull, the T/W ratio is impressive, giving a lightly armored vehicle a very high max speed as well as torque to advance even through the roughest of terrains. As its predecessor, it can reach speeds up to 70 km/h and 20 km/h on reverse with a gear change time from max forward drive to reverse in close to 5 seconds. It holds the ability to cross over water bodies, giving it an advantage in reaching positions no other vehicles are able to reach whatsoever. It has the ability to neutral steer, a feature not seen often in Russian vehicles.

125 mm 2A75 cannon
Two-plane stabilizer
Reduces the swing of the gun in two planes while moving
Autoloader
Automatically feeds projectiles into the breech. The speed does not depend on the skills of the loader
Ammunition40 rounds
First-order22 rounds
Reload7.1 s
Vertical guidance-5° / 15°
Main article: 2A75 (125 mm)
The Sprut-D is armed with a 2A75 125 mm smoothbore cannon, a similar cannon in performance as the T series tanks capable of firing the same munitions. While it doesn't fire the 3BM60 'Svinets-2' as the T-80BVM or the T-72B3, it fires the 3BM46 'Svinets-1' which is a very capable round in game. While it stays short compared to other rounds seen at top-tier, at 10.0 it is the best round seen followed by the M900. This round is able to pierce through all the tanks seen in game with some exceptions as the Leopard 2PL/A5/A6 turrets or M1A1/A2 turrets.

The Sprut-D should be primarily used as a scout flanking vehicle due to its high speed, low profile, scouting capabilities and firepower. It holds primarily 3 uses:

Due to the high speed and really powerful gun, it can be used to hit any enemy from behind. This tactic should be a "Hit n' Run", you should disable or destroy targets and leave before they can engage you. The powerful gun can take the heaviest of targets with ease if used properly

The capable optics, in combination with laser range finder and thermal optics, it is able to detect, target and engage enemy vehicles at all ranges thanks to any of its projectiles. Be aware of your ammo as it can only carry 22 on the carousel which can be consumed very fast, so make all shots count. Unless the commander is certain it has not been detected, moving between positions is adviced to ensure survivability, especially when the player respawns as an aircraft and is aware of the 2S25M's position.