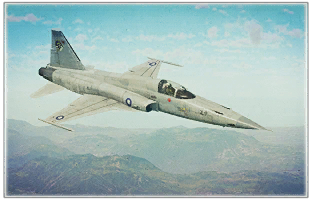 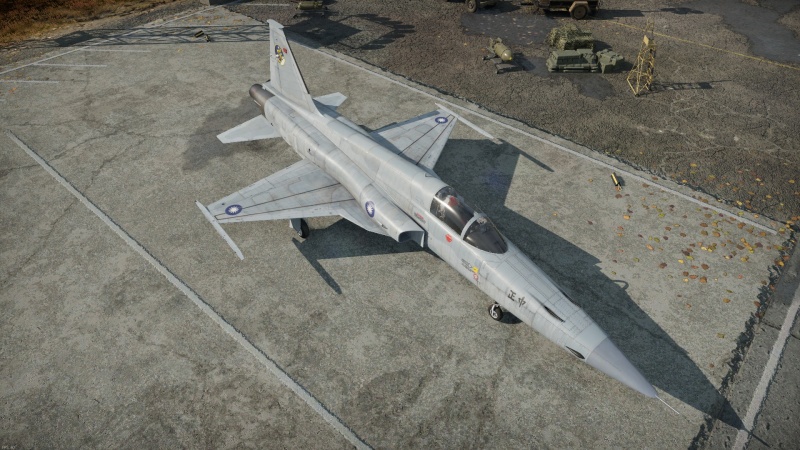 The ␗AIDC F-5E is a rank VII Chinese jet fighter with a battle rating of 11.0 (AB/RB/SB). It was introduced in Update "Danger Zone".

A licensed CKD built of Northrop's F-5E series by the AIDC (aka 漢翔) as the alternative for ROCAF's perished dream of a fleet of F-4Es and strengthening their military force: this variant of F-5E has the same capabilities of the original US built-ones, with hard hitting AAMs/AGMs as well as varieties of payload from rocket pods up to 2,000 lb bombs, making F-5E the saviour of the ground forces as a retaliation against both ground and aerial targets who pose a threat to the team. Although it is not as dominant in air combat as the PLAAF J-7E, the F-5E's ability to carry four AGM-65 Maverick missiles makes it a uniquely valuable aircraft in the Chinese tech tree for precision standoff CAS.

Since AIDC received different batches of F-5E/Fs through the two decades of assembling, their airframe naming can be confusing (K, Ba, C, Pseudo-C); but in this case, this is the C structure which is totally identical to its American counterpart. With a pair of GE J85-G-21A and a light yet surprisingly sturdy airframe, although the overall acceleration is nowhere comparable to jets at its tier, but the revised airframe did help F-5E making manoeuvres easier thanks to its above-average manoeuvrability. Those who are stalling or used up their energy will meet their miserable end very quickly.

While some players take it as a deliciated jet fighter against aerial targets, as a multi-role lightweight fighter, the overall payload is surprisingly high thanks to the composite materials used on its wing; bringing either lightweight bombs or devastating heavy bombs are among its options; do keep in mind that this turns F-5E into a slow bomb truck which can be shot down with relatively ease, so avoid enemies before delivering the payloads.

A common misconception of lightweight aircraft is its protection. While F-5E is known to be tough in top rank battles that sometimes it takes 2 missiles to send it back to hanger, the whole jet has no extra protection, meaning that any projectiles that shoot through the thin skin of the airframe is more than enough to take the pilot out with ease.

The F-5E (China) can be outfitted with the following ordnance presets:

Like its tech tree predecessor and its American counterpart, F-5E was designed to be a lightweight and inexpensive option for countries with tight budgets. This version of ROCAF's F-5E is identical to US ones with new avionics and engines to retain its combat capability against possible enemies. While this might sound good at first glance, players have to consider for a major problem- the waves of SARH/ARH capable jets at 11.0; you will either face waves of Sparrows or even worse, waves of Phoenixes from F-14A; for lightweight jets exactly like F-5E, facing such missiles alongside their carriers will be the ultimate nightmare to deal with. Players have to survive the first wave of head-on attacks at the first place in order to take revenge on enemy targets. Although only a pair of AIM-9P and M39A2 cannons are available for air-to-air missions, if used at the right moment ie. a careless or slow enemy, 2 missiles are more than enough to score some hits. If it has to join a dogfight, the high ammo count at its tier can give trigger-happy players more opportunity to shoot down enemy aircraft, even multiple targets if aimed properly. But do note that a pair J85-GE-21A still aren't something with high thrust, any severe energy loss gives players very little chance to even regain the speed, making it easier to be shot at.

If CAS is your cup of tea, F-5E has a great variety of ordnance ranging from napalm bombs, general purpose bombs, Zuni rockets, as well as 2 pairs of AGM-65B. It can be said that F-5E is the long-awaited CAS aircraft for the Chinese tech tree (note: PLAAF only had AGMs in service after the introduction of Su-30MKK Flanker-H in early 2000s) . For a less risky approach, use the Mavericks to take out MBTs or menacing SPAAGs, its explosive content and penetration is more than enough to take out any unnoticed ground targets. Since Mavericks used IR/TV tracker in this case, some players sought it as a surprise way to shoot down hovering helicopters from safe distance and altitude. While bombs and rocket pods are available as well, due to the lack of equipment, F-5E still doesn't have any form of ballistic computer. Players should enter the battlefield below 600 m and at around 700 km/h then dive upon the target at 30°, then drop the payloads and pullup for a run; while rockets requires higher altitude for the dive, so use them with extreme caution and practice the trajectory for precise hits. Napalm can also be useful in some way for the nature that it could burn plants and open-top vehicles, but its aesthetic use is much greater than its practical use, i.e. blinding TVD modules on vehicles or equipment with its extreme heat.

Earlier in 1968, the Nationalist Government had proposed an agreement to Northrop to produce their latest F-5E/F Tiger II domestically in Taiwan. While the batches of earlier F-5A Freedom Fighters joined ROCAF in 1965 as the replacement for the already obsolete fleet of F-86s, those 48 F-5A series were then handed over to the RVAF in 1972 while some batches of USAF's F-4 Phantoms II were transferred from US Pacific Air Force and stationed in Taiwan; the aforementioned agreement with Northrop was signed in February 1973 where AIDC received the license for building 100 F-5E/F series under "Project Tiger Peace 虎安計劃". 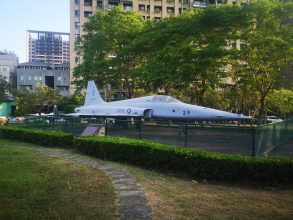 The overall production program could be divided into 6 separated batches and the very first F-5E assembled in Taichung (No. 5101) was then named Chung-Ching (中正, true name [名諱] of Chiang Kai-Shek [蔣介石；Kai-Shek is the courtesy name]) as his 88th birthday present. Although the first batches of 100 F-5E were delivered successfully, but later changes in Sino-American relationship (the 1979 Communique) forced the Nationalist Government to sign further agreements for new batches of F-5Es, as their proposed purchase for 48 F-4E[1] was ditched by President Carter. The upcoming batches of F-5 consists both the E/F variant and were produced until 1986 by the end of Tiger Peace VI, a total of 242 F-5E and 66 F-5F (308 in total excluding the first military aid ones from US). Although ROCAF had plans for an upgrade of F-5E with F-CK-1's avionics and missiles in early 2000s, this project failed to earn ROCAF order.

Since the heat of the first Strait Crisis has passed, the "Tigers" didn't have the chance to be involved into combat actions; but two of these jets defected to Mainland China throughout the 1980s and they were among the very last cross-strait defects. These jets were also involved in 50 crashes with 52 deaths; after the three consecutive crashes within half-a year from October 2020 (5261; engine flameout; pilot DOA) to March 2021 (5286 and 5287; mid-air collision), ROCAF decided to decommission their fleet of remaining F-5s in Taitung by 2025 , replacing them with the new T-BE5A Brave Eagle.[2]