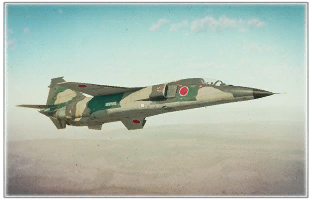 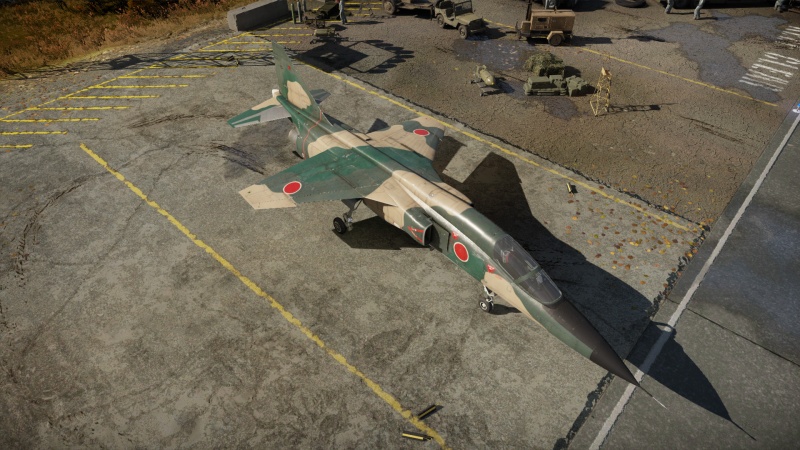 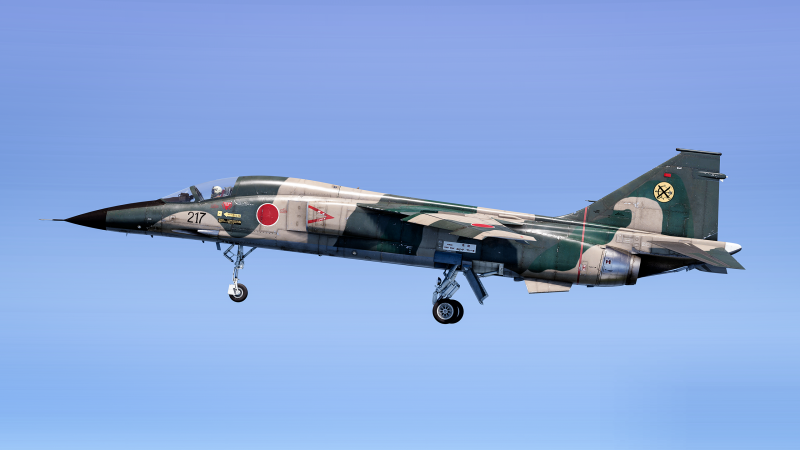 The Mitsubishi F-1 is a rank VI Japanese jet fighter with a battle rating of 10.3 (AB/RB/SB). It was introduced in Update "New Power".

The sleekness of the aircraft lends itself to flying fast and speed should be maintained when flying, especially during air-to-air combat as a slow-flying F-1 is a relatively easy target due to poor manoeuvrability at slow speeds. To help in instances where the aircraft must fly at slower speeds (landing, bombing and ground rocket attack), slats and spoilers help create a higher lift capacity and roll rate, preventing the aircraft from stalling and plummeting.

The F-1 fighter, like many of the newer aircraft, has shed most of its armour in return for better speed and agility. The only armour outfitted on the previous T-2, the 38 mm bulletproof glass situated between the fore and aft cockpit, is NOT present, having been removed with the aft cockpit. Pilot sniping is therefore increased in likelihood in comparison with the T-2.

Damage sustained to the wings will not affect fuel loss as no tanks are mounted here; they are only mounted within the aircraft's fuselage. While many aircraft can absorb a huge amount of ammunition rounds in the fuselage before losing something important when it comes to the F-1 fuselage hits typically result in a hit to the engines, oil coolers, fuel, pilots or the radar. This is where pilot skill and manoeuvring come into play to make it very difficult for an enemy pilot to get a firing solution. High-G manoeuvres within this aircraft may hurt the speed and manoeuvrability; however, it may save the pilot's lives by causing many missiles such as the AIM Sidewinders to miss due to their lower g-turn threshold.

The JM61A1 20 mm Vulcan cannon is a monster and at the same time a headache for new pilots not used to it. Unlike most other machine guns and cannons in the game (or in real life for that matter), trigger depression here does not immediately produce flying bullets. Due to the characteristics of the JM61A1 cannon, it requires an initial spool-up time or spin of the cannon barrels before ammunition can be fired. The high rate of fire can easily melt the barrel, however with the rotating barrels, each barrel can cool off enough before it is its turn again to prevent damage. To initiate this, trigger depression will result in a .25 second delay before the ammunition begins to fire to allow the barrels to get to proper rotating speed. Once it gets going, 750 rounds of ammunition do not last very long.

Trigger discipline is necessary when using this cannon as due to its rate of fire (about 6,000 RPM, ~100 RPS or 5 seconds of ammunition) will easily blow through the 750 rounds carried by the F-1.

The F-1 can be outfitted with the following ordnance presets:

At its high BR, with mediocre flight performance and only rear-aspect missiles, the F-1 must be played extremely passively. The match will more than likely be heavily determined by the performance of your team, with the F-1 occasionally coming in to assist where it can. The AIM-9Ps can prove very effective on an opponent not fully conscious of or focused on the F-1's presence. However, if the enemy pilot is aware and evading, the chance of getting a good angle for a launch becomes very slim, even with the use of radar-slaving. This along with many aircraft having flares means the element of surprise is critical while operating this vehicle. A few lucky or shots with its cannon prove to be extremely effective, though again it is not advised to get into dogfights in this vehicle due to its generally poorer performance.

Fuel consumption with the F-1 is rather high, with the option for 30 minutes of fuel often being necessary for most matches.

Assisting manoeuvres with keyboard input is very helpful, as with mouse aim alone, the aircraft tends to wobble around its central axis.

Like the T-2, the F-1's wings will break off in high-speed negative G manoeuvres.

With the ballistics computer, the F-1 can prove exceptional in the role of close air support with its bombs, rockets and even gun, if complete air superiority has been accomplished. Though, with the lack of countermeasures, pilots will find themselves vulnerable to SAMs if not addressed properly. Its exceptional radar system often provides an advantage over enemy air combatants. Flying low, once an enemy aircraft has been located, it's often a good idea to turn off the search or lock radar as the chance is often great that the enemy is equipped with a RWR, alerting them to your presence and your upcoming attack. Again though, the F-1 suffers greatly when forced into drawn out engagements with the more capable enemies at its battle rating, though the opposing aircraft in this mode are not always similar in battle rating.

Main articles: AN/APS-21, AN/APG-26
The Mitsubishi F-1 is equipped with an AN/APS-21 search radar, as well as an AN/APG-26 target tracking radar. Both radars are located in the nose of the aircraft.

The Mitsubishi F-1 was an indigenously-produced Japanese supersonic fighter aircraft that served with the Japanese Air Self Defence Force (JASDF). Based on the earlier Mitsubishi T-2, the aircraft first flew in 1975 and entered service a short time later.[1] A total of 160 aircraft were initially ordered, but the order was reduced to 77 airframes due to budget constraints.[1] In service, the aircraft served as an anti-shipping platform and was intended to fire the Mitsubishi ASM-1 anti-ship missile at enemy naval vessels.[2]

By the time it entered service, the F-1 had already grown obsolete due to it being relatively underpowered and unsuitable for air combat manoeuvring. Despite this, F-1s of the JASDF served until 2006, being replaced by modernized variants of the F-4EJ and the Mitsubishi F-2.[1][2]

The Mitsubishi F-1 was developed from the T-2, a jet trainer and the first Japanese-designed and manufactured aircraft to break the sound barrier.[1][2] The F-1 was almost identical to its trainer counterpart; the main visual difference was that the F-1's rear cockpit was faired over to make room for an avionics bay. The aircraft featured a J/AWG-12 radar, an upgrade over the T-2's J/AWG-11 and similar to the Phantom FGR.2's AN/AWG-12 radar. The aircraft also gained a centreline hardpoint for an external drop tank, allowing the aircraft to use all of its wing hardpoints to carry munitions.[1][2]

Due to the design requirement specifications, the F-1 was otherwise highly similar to the T-2, retaining its engines, airframe and armament. It was so similar that the first pair of F-1s were developed from T-2 airframes taken off the assembly line.[1] The first prototype F-1 flew on June 3rd 1975, while the first production aircraft flew in mid-1977.[1] The aircraft was accepted for production and service with the JASDF.[1][2] 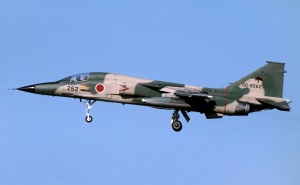 The first order for twelve F-1 aircraft was approved in the 1975 fiscal year, and the first aircraft deliveries began in 1978. The F-1 entered full operational service and was initially used by the 3rd Squadron of the 3rd air wing at Misawa Air Base.[2] The aircraft eventually equipped a total of three squadrons, being the 3rd and 8th Squadrons at Misawa and the 6th Squadron at Tsuiki Air Force base. Deliveries of the F-1 were completed in 1987, with only 77 aircraft being delivered; this was due to the budget constraints of the JASDF.

In service, the F-1 was intended to be used as a low-altitude anti-ship attack aircraft, utilizing the Mitsubishi ASM-1 air-to-ship missile.[2] A reconnaissance variant of the F-1 was also planned but was cancelled in favour of the RF-4EJ Phantom.[1] Due to the design of its airframe and lack of engine power, the F-1 was rather unsuited for the air-to-air role and soon became obsolete. Despite this, the JASDF program to deliver a replacement stalled,[2] and the F-1 soldiered on until the early 2000s. During this time, the F-1s were given a service life extension (SLEP) upgrade, which increased their service life from 3,500 to 4,000 hours.[1] In the early 2000s, the F-1s were gradually retired, replaced by the F-4EJ and F-15J in the conversion training role and by the T-4 in the standard training role.[1] In its combat role, aircraft was replaced by the Mitsubishi F-2, a derivative of the American F-16 Fighting Falcon.[2] The last F-1s served on until 2006; it never saw combat nor fired shots in anger.[1]