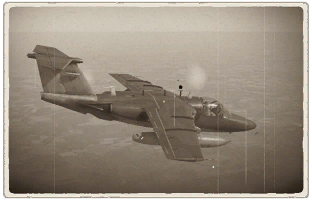 There is no armour on the SAAB-105G; the internal modules of the aircraft are fairly spaced out with engines far apart in the rear fuselage and fuel tanks taking up all of the wings and a portion of the forward fuselage. Beware of any wing damage when carrying heavy bomb loads as there is already a lot of strain on them, and they may overload sooner than you would expect.

The SAAB-105G can be outfitted with the following ordnance:

The SAAB-105G is a very flexible multi-role aircraft, best used in the interceptor role at the beginning of an air match, then changing armament mid-match depending on the situation. Thanks to its airspawn and 2 x RB24 (Swedish AIM-9B) missiles, you can hunt down enemy bombers and heavy attackers before returning to base. Beware as these missiles have very poor tracking on targets doing anything more than flying in a straight line, so are best used on enemies who are too slow to manoeuvre or are otherwise unaware of your presence. Once you have spent the 2 missiles or there are no viable targets to use them on, you will need to return to base to rearm.

On your second take-off, you should consider if your team needs more air power to shoot down fighters, or if you can spend the time to bomb bases or attack ground units. The SAAB-105G gets two wing mounted 30 mm cannons, the same as on the previous SK60B, and performs similarly in a dogfight to that plane; you want to use your massive firepower and very stable turning characteristics to force enemies into turn fights. Be aware of your surroundings though, as the aircraft accelerates fairly slowly after manoeuvring and can make an easy target for far faster aircraft.

For ground attack, you have a very wide range of high performance weapons to choose from. All bombs and rockets have access to a bombing computer, making accurate attacks extremely easy, and the 30 mm gun pods have enough firepower to destroy light pillboxes and medium tanks in a short burst.

As a CAS aircraft in Ground RB you need to be aware of the airspace conditions before selecting your loadout. You are limited to 2 x 2 drops of any kind of bomb, but can only take the gun pods for dealing with air threats with the weaker 500 lb bombs. All bomb loads get access to the RB24 missiles as well, but the added weight is rarely worth taking due to the unreliability of the missiles. Thanks to the bombing computer though, landing even the 500 lb bombs within the 8 m vehicle destruction radius is very easy so long as the targets are not moving too quickly.