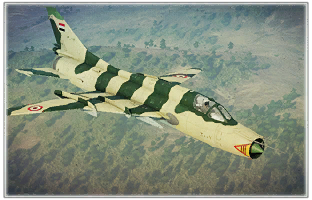 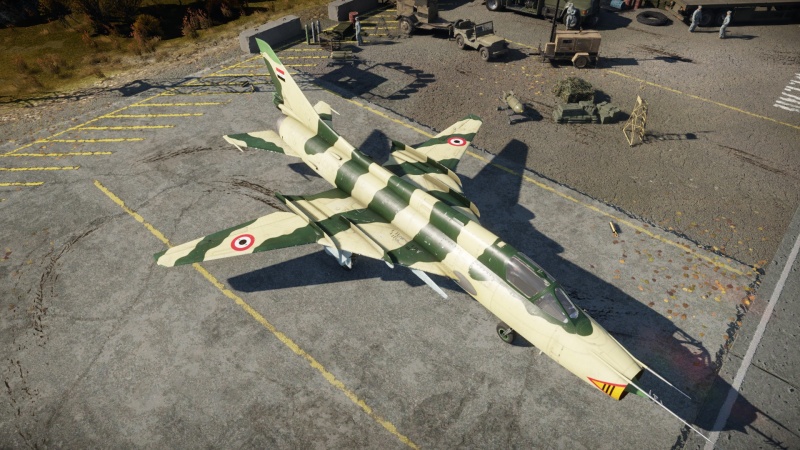 A Syrian export cousin to the Su-17M2, the Su-22M3 has some differences from its tech tree counterpart. It uses a Tumansky R-29 engine similar to the MiG-23M/MiG-27M, and the airframe is that of the Su-17M3, featuring a new forward fuselage layout modified from a two-seat trainer variant. The flight performance is similar, but Su-22M3 has enhanced payload options: It can carry up to six R-60 missiles for air-to-air combat compared to the Su-17M2's four, and up to four Kh-25ML or two Kh-29L compared to the Su-17M2's two Kh-25 or one Kh-29L. It also has countermeasures, something the Su-17M2 sorely lacks. The 12 flares/chaff capacity is stingy, but they still make the Su-22M3 a less vulnerable target to incoming missiles.

Despite its long wingspan and massive profile, the Su-22M3 is pretty responsive and has significant manoeuvrability for a plane of its profile. Thanks to the variable wing swept, it can move its center of mass and, thus, increase or decrease its roll rate. A higher wing angle allows for higher speeds with a reduced roll rate and vice versa; a lower sweep means slower speeds at an increased roll rate. While it is not meant to do so, the Su-22M3 is a pretty good turnfighter compared to other jet fighters. Combined with the R-60 missile, this ability makes it a capable fighter in the hands of a good pilot. The engine is potent for a plane its size, making the Su-22M3 reach speeds up to 2,500 km/h. However, it must be known that these high speeds can only be acquired when flying at significant altitudes.

The Su-22M3 is vulnerable to any anti-air weapon, from anti-air cannons to missiles. However, the speed it can reach and the stand-off weapons make it a very versatile aircraft, reducing the attack window and awareness of enemy anti-air systems; this should be the main "armour" to use in combat. However, the small amount of countermeasures makes it one of the most vulnerable high-rank jets in-game, with only 12 countermeasures. These are large-calibre countermeasures, meaning they are more effective than the standard countermeasures seen in other aircraft. Depending on the Su-22M3 attitude, the large-calibre flares can disrupt IR guidance even if the afterburner is at full power. However, the Su-22M3 is still vulnerable to BVR missiles (Beyond-Visual-Range), like those mounted on the F-14 Tomcat and some models of the F-4 Phantom. The Su-22M3 lacks BVR weapons, and pilots must close the distance with the attacker to have a chance to fight back.

The Su-22M3 can be outfitted with the following ordnance presets:

The Su-22M3 has a substantial amount of different weapons for different situations. As it is implied, most of the ordnance is meant for a wide variety of ground pounding strategies and techniques, from pin-point precision airstrikes to total destruction. Its ordnance is not only very powerful for ground battles but also come in handy for aircraft simulator battles.

It is pretty straightforward that the use of unguided rockets are primarily for quick destruction of unarmoured targets such as howitzers, trucks, anti-air guns, etc. But some are very capable of decimating heavily armoured targets such as MBTs, pillboxes and ships. The rockets accessible for the Su-22M3 are the S-3K, S-8KO, S-25 in an unguided and a guided variant. S-3K hold a significant amount of explosive power for a rocket its size, and since it can be carried in numbers, it is very good at taking down enemy convoys and light armoured targets. The S-8KO rockets hold a much smaller explosive power for an increase in armour penetration. Good for taking out armoured targets such as MBTs and pillboxes. The S-25O, unguided version of the S-25, hold the highest explosive power out of all the rockets seen in the Su-22M3, with up to 60kg of explosive power. It is able to take down any target the Su-22M3 will face at the expense of only being able to carry two of these rockets. The S-25L is the laser guided version of the S-25, able to be launched without the fear of missing the target. However, this capability comes at the expense of a reduces penetration and explosive payload in order to fit the laser guidance, it only holds 20kg of explosive power compared to the 60kg of the S-25O.

The Su-22M3 has access to a wide range of bombs in different loadouts. It has different payloads for different purposes, from carpet bombing and lockdown of a specific area to takeout of heavily armoured targets. These bombs are the OFAB-100 100kg bomb, OFAB-250sv 250kg bomb, FAB-500-62 500kg bomb and the ZB-500 incendiary bomb. Each bomb has a suggested use depending on the needs. The OFAB-100s are very capable of base destruction due to the amount to be carried and very practical when taking down enemy columns. The OFAB-250sv are more for medium-game hunt, not too powerful as the FAB-500 but not as weak as the OFAB-100. It is an all-rounder bomb capable of everything. The FAB-500-62 is a very potent bomb able to take down even the strongest of enemies, including capital ships just like aircraft carriers. All the bombs are able to be dropped one-by-one, making it able to do precision airstrikes with a single bomb over a single or multiple targets. The ZB-500 incendiary bomb has a limited but interesting effect as it is able to take down almost instantly lightly armoured columns and lockdown areas for lightly armoured vehicles such as a capture point or a strategic location in the map.

The Su-22M3, as the successor of the Su-17M2, has access to the same missiles but at an increased cargo capability. It is able to hold almost double the amount of missiles of the Su-17M2. It has access to Kh-23M, Kh-25ML and Kh-29L, all very capable missiles with their pros and cons. Kh-23M, as seen in the Su-17M2 and other aircraft with access to them such as the Yak-38, are very similar in nature to AS.30 Nord and AGM-12 Bullpup; a small explosive payload in a manually controlled missile. It is a good starter missile but is not recommended for this to be the main ground pounding weapon as their low explosive mass and manual guidance make this a very difficult to use weapon, but in the hands of a skilled pilot, these can be proven to be devastating. Kh-25ML are the first laser guided missiles the Su-22M3 has access to, holding a third of the explosive power the FAB-500-62 has but with the advantage of being able to be guided up to target with extreme precision. It is able to take down many enemies with a single missile and in rapid succession. Thanks to being able to carry four of these missiles, the Su-22M3 is an excellent ground pounder when using these missiles. Finally, the Kh-29L, the biggest air-to-ground missile in the game. Holding slightly less than half of the explosive power of the FAB-500-62, the Kh-29L is the ultimate all-rounder missile capable of decimating almost everything it faces. It is extremely capable of taking down even the heaviest of ground targets with ease and able to cause significant damage to even greater targets such as cruisers or aircraft carriers. Two well placed hits from the Kh-29L are enough to take down an entire aircraft carrier within seconds.

The R-60 missiles are versatile in medium-range engagements. However, the limited range of 3 km (>2 mi) means that the Su-22M3 runs the risk of becoming trapped in a dogfight where its poor turn and roll rates reduce the chances of getting a lock. Additionally, the R-60s' short range means that pilots must stay alert for BVR missiles, which will destroy the Su-22M3 without warning. Flanking the enemy side and engaging from behind will let the pilot take advantage of the six R-60s the Su-22M3 can carry.

In air battles, like the Su-17, the Su-22M3's usage and capabilities are heavily dependent on how well you can use the variable sweep to your advantage. With the wings fully swept, its performance at low speeds can become extremely sluggish, making you an easy target for any fighter that finds you at slow speeds. However, with the wings unswept and with awareness of your speed, altitude, and enemy presence, you can dominate any sustained fights. It is best to start out your match by attacking bombing bases, then after all your bombs are dropped, head into direction of the enemy teams base at low altitudes and avoid head-ons. Try to drag fighters away from the group.

On 1v1s against F-4s, JA37s, and MiG-21MFs, attempt to drag them into lower speeds where you can fully unsweep your wings and use your better low speed turning against them. With fighters that are better in turns with energy such as Mirages, Drakens, and F-5s, slowly take away their energy and altitude, making them easy targets to clean up . Your upgraded engine over the Su-17 will allow you to escape from any attempts these fighters attempt to make with you. It is not recommended to turn-fight F-5s and is best to slowly drain their speed and never attempt to turn with them, as the F-5's energy retention and turn rate is higher than the Su-22 in almost all circumstances.

Always be mindful of your speed and sweep angle as many pilots will find that their plane can become either very sluggish at full sweep angles or be very slow with unswept angles. NEVER attempt to take on coordinated groups as your missiles and guns can be quickly drained (as you only get 6 R-60 at maximum and only 160 rounds for your cannons), and get you shot down quickly. It is strongly recommended to play in coordination with other players to bait enemy players into you to drastically increase your chances of survival. Going to high altitude is unadvised, as with the Su-22's low countermeasure amount, (12 large-calibre countermeasures) you will be quickly dispatched by radar guided missiles such as the AIM-7 Sparrow.

The Su-22M3 has a low turning rate when you are at higher speeds. If you have a F-5C on your tail, try to go to your teammates for help because you can't out-turn them no mater what.

For a base bombing run, the Su-22M3 is a good plane as it can hold enough bombs to destroy 2 bases and still have 2 R-60s for use. Try to fly low towards the ground to minimize the plane's profile to radar. The two R-60s can be reserved for self-defense or for assisting with any teammates that need help. A small team of Su-22M3s can quickly destroy all of the enemy bases.

The Su-22M3 is one of the variants of the Su-17 strike aircraft series designed for export. A distinctive feature of the project was the adaptation of the Su-17M3 airframe for the installation of the Tumansky R-29BS-300 engine, similar to the exported MiG-23's R-29-300. It was assumed that the engine, familiar to foreign operators, would simplify the service and operation of the aircraft. Unlike the earlier simplified commercial versions, the Su-22M3 modification had avionics completely unified with the Su-17M3. The machine was produced in 1982-83 in Komsomolsk-on-Amur, a total of 70 Su-22M3 units were built. These fighter-bombers were delivered to Hungary, Syria, and Iraq.