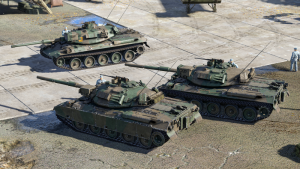 Type 74 variants ready in the hangar

The Type 74 (74式戦車) is a main battle tank (MBT) of the Japanese Ground Self-Defense Force (JGSDF). Built and designed by Mitsubishi Heavy Industries (MHI) as a supplement and replacement of the earlier Type 61 MBT as it didn't compete with Russian tanks like the T-62. It was designed to be able to compete with western designs like the US M60 or Leopard 1. Like most Gen 2 tanks that usually mounted the Royal Ordnance L7 rifled 105 mm gun. Starting development in 1964 with the ST-B1 and only being finalized in 1974 made the Type 74 quite the latecomer and outdated already as Gen 3 tanks started popping up like the Leopard 2, Challenger and M1 Abrams just a few years later.

As this tank still sees service, it is slowly being replaced by both the Type 90 and Type 10 MBTs in their new role as Gen 3.5 tanks.

Thermal jacket equipped to the barrel.

Otherwise also known as the Type 74 Kai or Type 74 Kaishū (Improved | Modified), was a Service Life Extension Program (SLEP) for the Type 74 which switched out the night vision device to thermal, includes an automatic target tracking function, laser warning system directly linked to the smoke dischargers and a more powerful laser rangefinder. On top of electrical upgrades, side skirts and applique armour was tested with and the program seemed promising to keep all Type 74s in longer service.

But due to the high development cost, the refurbishing cost of all existing Type 74s and the maintenance of said vehicles, the program was scrapped.

4 Type 74 (G)s got adopted and operated by the Fuji Training Corps Tank Training Corps and later restored to the condition of the Model E with exception of keeping the LWS and Thermal NVD, it transferred to the 1st Armored Training Corps until its abolishment where all modified Type 74s but 1 were scrapped.