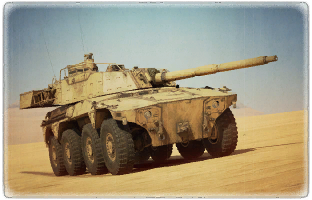 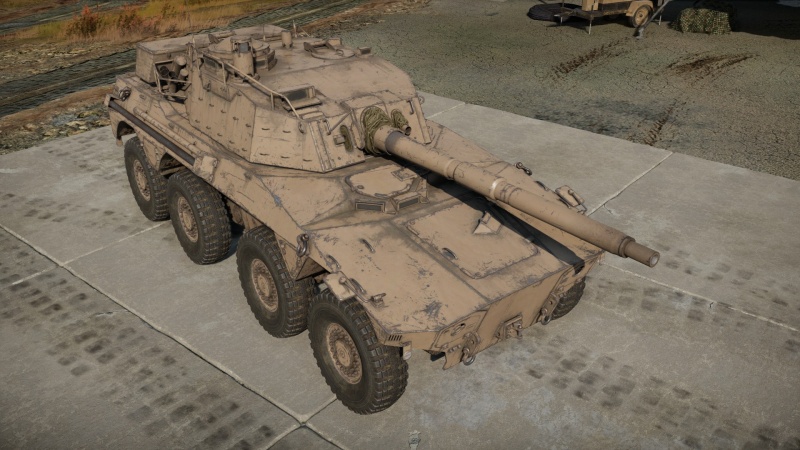 Armour on the Rooikat is, to say the least, nonexistent. It will be safe from rifle-calibre machine guns from all angles, but 12.7 mm and above will be able to penetrate the side armour at close ranges. Cannon-armed aircraft will also be a significant threat. This vehicle also has hull-break, so any main gun will probably instantly destroy the Rooikat Mk.1D. Therefore, the Rooikat Mk.1D's key to survival is mobility. It also comes stock with a desert yellow camouflage, which can be problematic on certain maps.

The Rooikat Mk.1D is armed with the Denel 76 mm GT-4 cannon. As far as game-play goes, it is essentially a hand-loaded version of the OTO-Melara 76mm/62 gun found on the OTOMATIC. It fires the same APFSDS and has HE with similar performance to the shell found on the OTOMATIC, albeit not VT-fused and thus far less useful. Its APFSDS has the ability to frontally penetrate any opponent in its battle-rating bracket, although the odd Maus may be troublesome, particularly if it is angled. 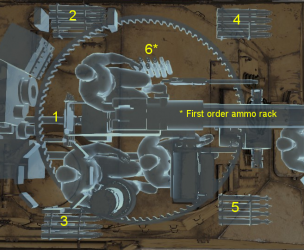 The Rooikat Mk.1D should be played either as long range support (with the help of the scouting mechanic) or in quick flanking manoeuvres. As a wheeled vehicle, the mobility is excellent and allows the Rooikat to get to ambush or sniping spots very quickly before the slower and heavier opponents show up. Although the gun penetrates far above its weight for its calibre, the post-penetration damage leaves something to be desired and can punish careless point-and-click targeting. Drivers of the Rooikat must take this in mind and put extra thought on where on a target they should aim, as its rather long reload does not leave room for error with such limited post-pen damage. If a player decides to snipe with the Rooikat, they should adopt a "shoot-and-scoot" strategy: shoot an opponent, fall back behind cover and relocate to a new firing spot to avoid retaliation. An opponent returning fire will most likely not have any issues taking you out within 1 or 2 shots.

During the mid 1970s, the South African armed forces issued a specification which kickstarted the development of the “New Generation Armoured Car” project. The aim of the project, as the name suggests, was the development of a new heavy armoured car that would replace dated existing designs in the near future.

First test beds were developed in the late 1970s, intended to primarily trial various designs for mobility. At the same time, South Africa was involved in some local conflicts with the neighbouring state of Angola during the mid ‘70s - mid ‘80s, further shaping the development of the ongoing project.

In the early 1980s, having sought knowledge and expertise from German engineers, several prototype designs were built and tested. Among them, the eight-wheeled ‘Cheetah Mk.2’ armed with a 76 mm gun was selected as the winner and was subsequently procured by the South African army. Small scale production began in the late 1980s, with the Cheetah Mk.2 officially receiving the name ‘Rooikat’ after entering service. Following initial limited production runs, mass production commenced in mid 1990, which led to a total of over 240 Rooikats being produced.

In the early 2000s, the Rooikat 76 Mk.1D was developed under a modernisation program, becoming the most modern modification of the vehicle. The upgrade introduced several smaller improvements, such as improved commander optics and number of smoke launchers as well as others. Over 170 Rooikat 76 Mk.1Ds serve with the South African army today.