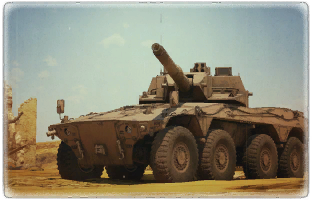 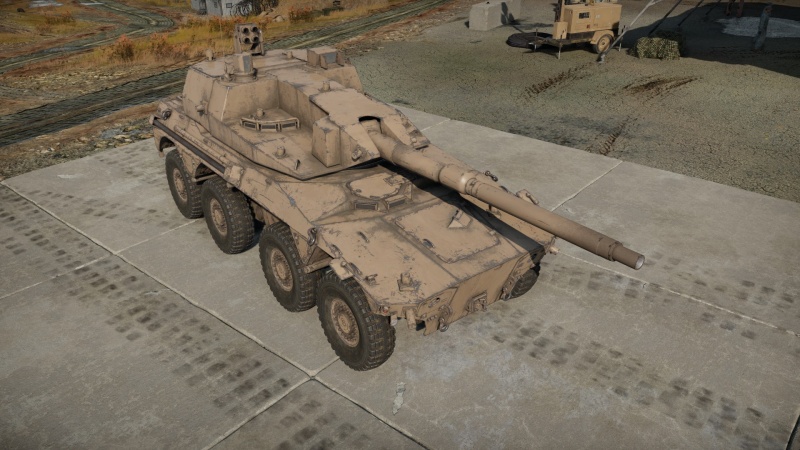 The Rooikat MTTD is a rank VI British light tank with a battle rating of 8.7 (AB/RB/SB). It was introduced in Update "Ixwa Strike".

The Rooikat MTTD can generally be considered to be lightly armoured. The frontal armour can resists machine gun fire, or autocannons from long-range and at an angle. Side armour can be penetrated by machine guns larger than 12.7 mm at close range, with the rear armour being even weaker. A somewhat spacious hull allows for poorly aimed shots to potentially fail to hit any critical modules, but chemical rounds will destroy the vehicle through overpressure. The turret features recessed crew members, allowing for careful use of the gun depression to only expose the gun and auto-loader ammo rack when hull-down. Chemical rounds may very well still trigger overpressure when hitting the turret, or detonating the turret ammo rack. The Rooikat MTTD features poor overall armour and survivability, and should use the vehicle's mobility to avoid the possibility of receiving a hit in the first place. The vehicle also inherits the stock brown-yellow camouflage from the rest of the South Africa line, allowing the vehicle to be easily spotted on non-desert maps.

The Rooikat MTTD features extremely good mobility, with limitations. The engine will power the vehicle to a top speed of 130 km/h (AB) / 120 km/h (RB/SB) on roads, though the average speed is around 35 to 55 km/h off road. The wheeled chassis will allow to turn the vehicle without losing too much speed, though the size of the vehicle means it will have a large turn radius, and it lacks the ability to perform neutral steering. Like for most armoured cars, snow, sand, and dirt will bring this vehicle to a crawl (<10 km/h in RB/SB). Performance on any sort of hill or incline is poor with low traction, making some normally accessible slopes impossible to climb. Although the vehicle is capable of high speeds, care should be taken to plan and familiarize map routes that will allow this vehicle to reach an advantageous position quickly. The vehicle characteristics favour open, rural maps over urban maps. When on urban maps, the vehicle's large turning radius will hamper its freedom of movement in narrow streets and between buildings.

105 mm GT-7 cannon
Two-plane stabilizer
Reduces the swing of the gun in two planes while moving
Autoloader
Automatically feeds projectiles into the breech. The speed does not depend on the skills of the loader
Ammunition32 rounds
First-order20 rounds
Reload6.7 s
Vertical guidance-10° / 20°
Main article: GT-7 (105 mm) 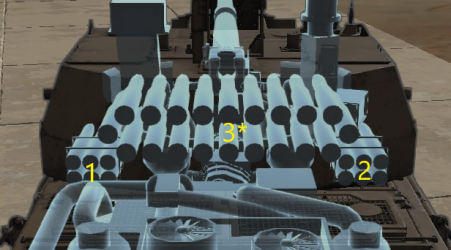 Ammo racks of the Rooikat MTTD

The Rooikat Medium Turret Technology Demonstrator (MTTD) was a private venture to test the concept of a Rooikat-based 105 mm / 120 mm gun turret with an automatic loading system.

It used a regular production Rooikat hull with a completely new two-man turret. The loader/commander was positioned on the left side of the turret and the gunner was located on the right side, both in sunken positions allowing a low profile wedge shape for the turret where the crew was located. The main gun was in the centre, a 105 mm high pressure gun but it was intended also to test a 120 mm low pressure gun. The main gun was automatically loaded with ammunition from the turret bustle. An active protection system (APS) mock-up was located on the rear of the turret but was not functional. The Rooikat MTTD was only a demonstrator vehicle and never entered production.[1]