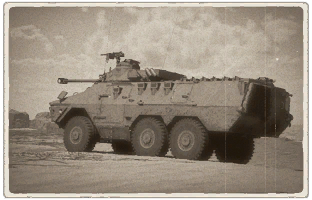 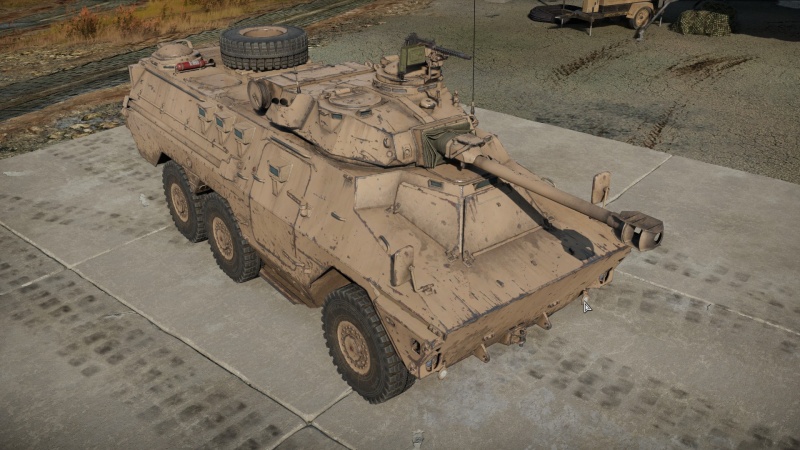 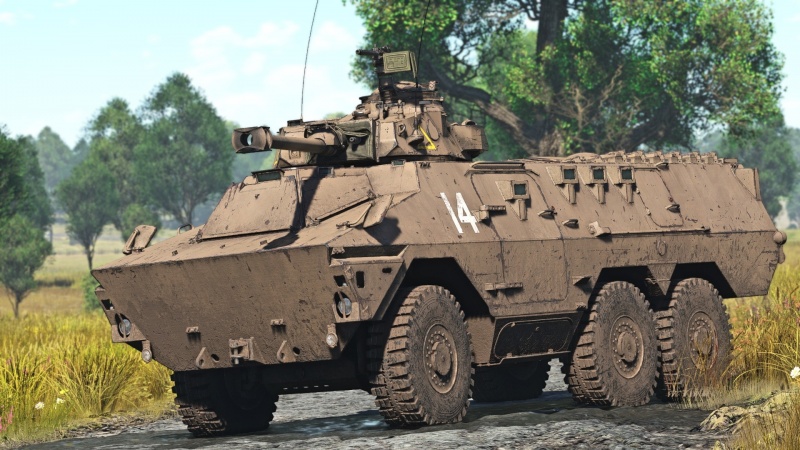 The Ratel 90 is a rank IV British light tank with a battle rating of 6.0 (AB/RB/SB). It was introduced in Update "Ixwa Strike".

The Ratel 90 is an IFV designed to provide fire support for the Mechanized South African Battalions in combat. It was modified to this duty with the identical turret found on the Eland 90 Mk.7.

With a needed playstyle keen to recon and opportunistic target eliminations by flanking, the Ratel 90 is currently the fastest vehicle available for the British tree at the rank.

Unfortunately, the vehicle is fast not because of a good engine, but instead because of the cutback of any armour. Players accustomed to holding off some shells in similar ranked vehicles as the Tortoise will have troubles surviving in this IFV. So instead it shall be played similarly to the Charioteer, now with more cooperative abilities as the scouting.

The Ratel 90 uses the GT-2, a licensed copy of the French 90 mm DEFA F1 low pressure cannon. The Ratel 90 comes with a stock OCC 60-62 HEATFS ammunition, capable of penetrating most tanks at its BR at any distance. Since the OCC 60-62 is a HEATFS shell, most of the damage will be spalling, meaning that the commander must know the opposing vehicle's crew layout and take out the most critical parts and crew members. 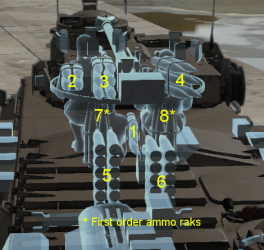 Ammo racks of the Ratel 90

The Ratel 90 is a vehicle that should be used primarily in a support or defensive role. In the support role, it is recommended that you stick with your teammates, specifically behind them. Focus on scouting targets for your team. You should stay behind your teammates due to the vehicle's lack of armour, ineffective even against small arms. In the defensive role, you chose a firing spot and cover a certain line of sight with a cover nearby, peaking out only to fire. In both roles, you should make extensive use of your binoculars to scan for and scout targets. 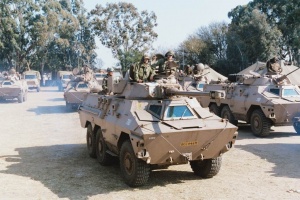 An assortment of Ratel IFVs, with a Ratel 90 in the foreground center.

The Ratel 90 was based on the Ratel 20 but with significant changes. The main feature of the Ratel 90 is a Denel DT-2 90 mm low velocity gun in the turret from the Eland 90 armoured car. Additionally, the hull roof was reinforced and the amount of troop hatches on top was reduced from four to two. Space for one of the passengers was removed to provide space for more 90 mm ammunition.

The Ratel 90 was designed to be used in the infantry support role but during the South African Border War they were forced into the anti-tank role. Against the initial T-34-85 tanks used by the FAPLA, the Ratel 90 proved to be a very deadly adversary. But once the FAPLA began receiving newer Soviet and Cuban T-54, T-55, and T-62 tanks, the Ratel 90 was forced to use its high mobility to outmanoeuvre the enemy tanks. Once the Ratel 90 was on the flank, they had to fire multiple 90 mm HEAT rounds into the enemy tanks, often aiming for weak points such as the engine and turret ring. 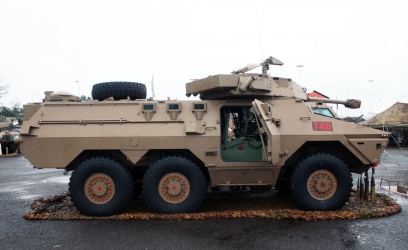 In the late 1960s, the South African military began changing its doctrine towards highly mobile warfare, embodied by small mechanized infantry units. The change in doctrine was necessitated when the military realized that heavy armour faced extreme difficulties operating in rural areas of the country. As a result, the army needed a new ICVnot only to ferry troops into battle but also to actively support them in the field. To that extent, a basic requirement for an ICV was formulated and a number of both domestic and well as foreign designs were evaluated.

The domestic Springfield-Büssing company developed a promising six-wheel ICVprototype, called the Buffel, constructed on the basis of a MAN truck. The further developed Buffel prototype was eventually selected for procurement and entered service with the military as the 'Ratel'. Production of the Ratel began in the mid 1970s, after a limited initial batch of production vehicles successfully underwent testing. Being a family of fighting vehicles, the Ratel came in various modifications, including the base model armed with a 20 mm cannon, two mortar versions, a close fire support variant armed with a 90 mm gun, as well as a command and ATGM carrier modifications.

Ratels served in numerous conflicts since their first introduction in the mid 1970s, with nearly all of its active service taking place on the African continent. The Ratel 90 saw its first combat use in 1980 during the South African Border War, where Ratel 90 anti-tank teams came face to face with T-54/55s on multiple occasions. By the end of production in 1993, some 1304 Ratels were produced across all variants. Due to its simplistic design and perfect fit for the dry climate of sub-Saharan Africa, the Ratel proved at home in the Middle East and north-west Africa. As a result, around a dozen more nations, excluding South Africa, still operate the Ratel ICV.