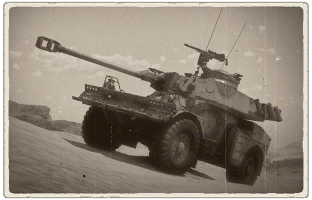 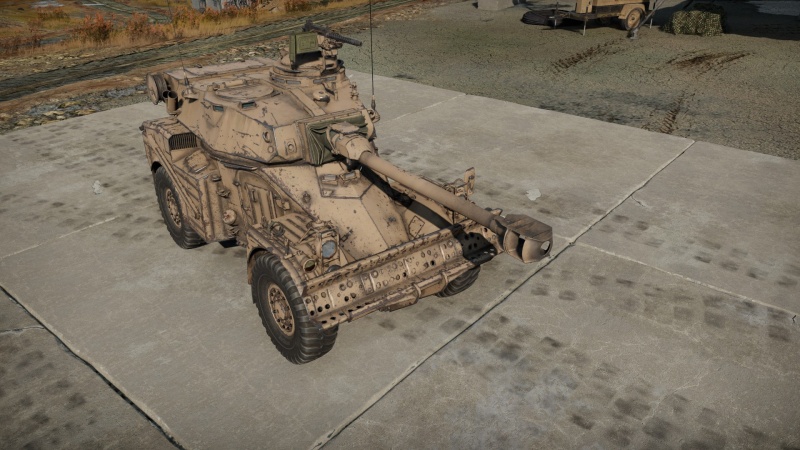 The Eland 90 Mk.7 is a light reconnaissance armoured car, built in 1962 by South Africa as a domestic variant of the French armoured car, the Panhard AML-90.

While the diminutive size and unpretentious look can be deceiving, this armoured car is sure to be one of the most agreeable light vehicles in the British ground forces. This combination of a remarkably mobile and small chassis plus satisfactory firepower is otherwise rarely found in British light vehicles; similarly to the reliable Crusader III and equal to the uncommon AEC Mk.II.

Meanwhile, Eland's weak armour is a problem for survival thus players will have to rely on flanking, scouting or ambushing tactics when engaging heavier armour.

The armour of the Eland 90 Mk.7 is little to nonexistent. The fact it only has 10 mm of armour gives it extremely low survivability, even 7.62 mm MG can penetrate the armour on some areas. The crew is compacted inside a really small box, making 90% of the rounds fired at it (both main gun and machine guns) one shot potential. While the thin armour might not trigger APHE fuses, it will surely trigger HE, HEAT. Regardless, not triggering an APHE fuse leaves any incoming shell to act as a solid shot, severely damaging the crew.

The Eland 90 Mk.7, similar to the AML-90, are Formula 1 cars compared to the tanks seen at the battle rating. The low profile, weight, and the fact they are wheeled makes this vehicle extremely fast. However, this only applies to asphalt or solid ground maps. The mobility is significantly reduced in mud, water, sand and snow, reducing the speed from nearly 100 km/h down to 20 km/h.

The Eland 90 uses the powerful 90 mm GT-2 low pressure cannon. The Eland 90 comes with a stock OCC 60-62 HEATFS ammunition, capable of penetrating most tanks at its BR at any distance. It should be noted that it only carries 29 rounds at max, 9 more rounds than the AML-90 but still a low count, and coupled with the poor survivability, commanders should always shoot to destroy in the least shots necessary, know center of mass, ammunition racks, etc to successfully engage a target. 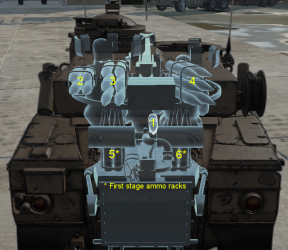 The Eland should be primarily used as a scout flanking vehicle due to its high speed, low profile, scouting capabilities and firepower (tremendous for such a small vehicle). The Eland has primarily 3 uses:

When on large maps, the scouting ability should be used at its full potential. The low profile and high speed make it able to crawl to cover fast and without creating much suspicion, while marking targets for friendlies to engage.

Due to the high speed and really powerful gun, the Eland can be used to hit any enemy from the back. This tactic should be a "Hit n' Run", you should disable or destroy targets and leave before they can engage you. This is nothing hard for the Eland as long as the escape routes and alternative routes are clear and within easy access.

Despite the optics not having a huge zoom, it is enough to be able to detect, target, and engage enemy vehicles at all ranges thanks to the HEAT-FS round. Be aware of your ammo as it can only carry 29 shells, so make all shots count. It also creates a relatively small smoke trail when firing compared to other cannons at the battle rating (105 mm, other 90 mm, 122 mm) thanks to the muzzle brake. Bushes can also be used to make this vehicle nearly invisible, due to its already low profile. A bunch of branches can cover almost 70% of the front, making it a moving and deadly bush. It also creates a small engine sound that will be, most of the time, masked up by other tanks, giving you a stealth capability which can be exploited in urban combat.