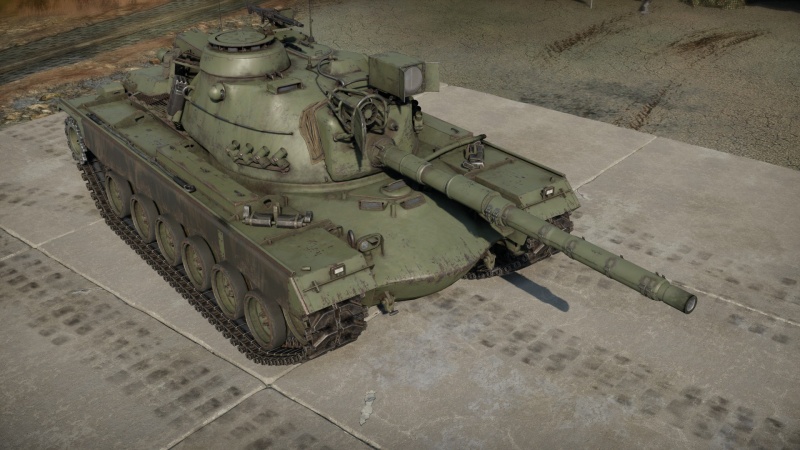 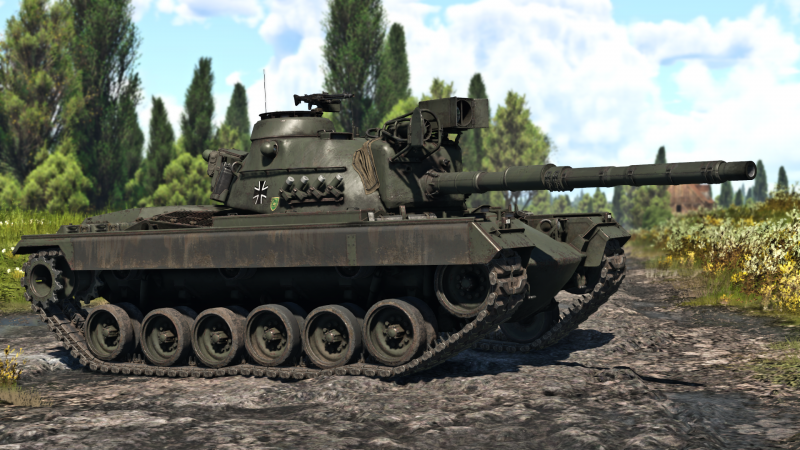 The M48A2 G A2 is a rank VI German medium tank with a battle rating of 8.3 (AB) and 8.0 (RB/SB). It was introduced in Update 1.81 "The Valkyries". It was born from the adaptation of the 105 mm L7A3 cannon on the already available M48A2 platform together with a new fire control system.

The lower front plate is a weak spot. The sides are decently armoured, but not thick enough to make angling the hull a valid tactic. Some thin vents on the top of the hull are vulnerable to strafing runs by enemy aircraft, which may cause engine fires. While the M48 hull has more armour than the Leopard 1, at this BR, this is largely irrelevant as most of your opponents will be carrying APFSDS. Sustained enemy fire will quickly result in your destruction. Despite this, the hull UFP is decent and can protect you from 100 mm APHE rounds. However, as mentioned above, this can not be relied upon and any bounces are the exception rather than the rule. 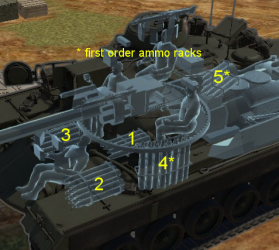 Despite their high rate of fire, the small calibre of the MG3A1 machine guns makes them largely ineffective against all armoured vehicles but the ones with an open compartment. They still can be used to ping targets as a rangefinding help.

The M48A2 G A2 is similar to the other M48 Pattons in the game except for the need to be more careful and aware of your enemies. It's a decent medium tank with well-sloped frontal armour and average mobility, but what makes M48A2 G A2 stand out is the upgraded engine giving it better mobility, and the upgraded 105 mm L7A3 cannon compared to the US standard 90 mm M41 giving it improved penetration and increased precision against distant targets, though this comes at the cost of higher battle rating. It can unlock DM23 rounds that have a great effect even against enemy vehicles at higher battle ratings when uptiered, and can penetrate their armour with well placed shots.

The armour of the M48 is rounded and well-sloped, decreasing the chance for certain shells to reliably punch through the armour, though the tank has some significant weak spots on the front. The lower glacis is the weakest part of the front, making it a desirable location for hostile tanks to fire at to knock out the M48A2 G A2 with ease. Keep in mind to protect the lower glacis as best as possible from enemy shells. The armour holds it ground against tanks with no APFSDS or APDS since these shells can penetrate its frontal hull and turret armour with ease. The armour all around is decent compared to tanks like Leopard 1, Vickers MBT and OF-40.

Playing the M48A2 G A2 is a great risk to be uptiered and face enemies like Radkampfwagen 90, Merkava, T-72A and OF-40 Mk.2A all having better mobility and speed than the old M48 Patton, they also have the advantage to be equipped with gun stabilizers that the M48A2 G A2 is not equipped with, making it an easy target for most tanks in an uptier. In those battles, it's wise to not advance blindly into the enemy and take a more careful approach, taking up a position where the M48A2 G A2 has the capability to get the first shot.

In lower rating battles the M48A2 G A2 can be used more aggressively, but it's still advised to not advance too fast, as certain vehicles also at that battle can be equipped with stabilizers and can get in a well placed shot on the move compared to the non-stabilizer tanks. These can have a big advantage over the M48A2 G A2 when it comes to brawling and engaging tanks while having the speed advantage and mobility to avoid incoming fire from a moving M48A2 G A2.

The M48A2 G A2 can be a tricky tank to use effectively in battle, lacking a stabilizer is a big disadvantage at its battle rating but it can still be an effective tank for defending captured points or taking up a "sniper" position where it can be relatively safe from enemies.

In 1958, West Germany received the M48A2 Patton III tank. Originally this tank included the 90 mm M41 cannon and a 750 HP engine. Later on the tank would receive an upgraded engine (from 750 HP to 825 HP) along with other changes and was designated the M48A2 C in German service. This tank served from the early 1960s to the late 1970s. West Germany realized that the 90 mm gun wasn't sufficient enough to deal with most of the top of the line Soviet MBTs, so in 1978 the tank received the German licensed built, 105 mm L7A3 gun found on the Leopard 1. Other changes included minor fire control system changes, a new commander hatch, passive night sights, and later on a laser rangefinder. This version was designated the M48A2 G A2 and remained in service till the 1990s.