The tank's mobility is serviceable at best. It has a decent top speed but off-road the tank will slow down to a crawl. The acceleration is poor and a lot of speed is lost when turning. Taking long routes to the objective is not recommended. Flanking and maneuvering is next to impossible. Reverse speed is very sluggish as well. Because the tank is so inherently slow it’s best to avoid hills, slopes and mud. Do not over-extend or you will find yourself unable to reverse out of a bad situation quickly. The ▀KV I C 756 (r) can be effective in close quarters but always be one step back from the front to avoid being flanked by faster tanks. Going into a wide open area can be very dangerous. If the enemy has any positions that will allow side shots or access to un-angled sections of the tank, pushing is not recommended. On the other hand, positioning the ▀KV I C 756 (r) in advantageous positions overlooking long-range environments (where the additional armour protection will be even more effective) is a decent strategy.

All in all the ▀KV I C 756 (r) has a good gun and strong amour but suffers in maneuverability and speed (forward and reverse). It is best to control the engagement, either by maintaining distance or using effective cover to protect your flanks and allow angling. Be mindful of the weak spots on the front hull and the mantlet. Do not expose the side of the tank. The ▀KV I C 756 (r) isn’t a medium tank, so be cautious when extending in towns or other close quarters locations. 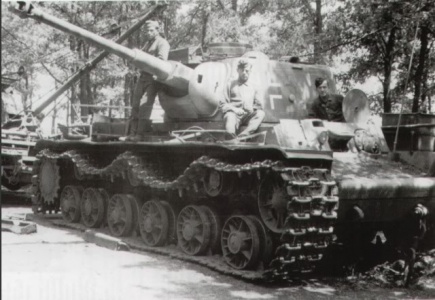