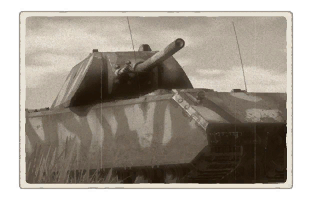 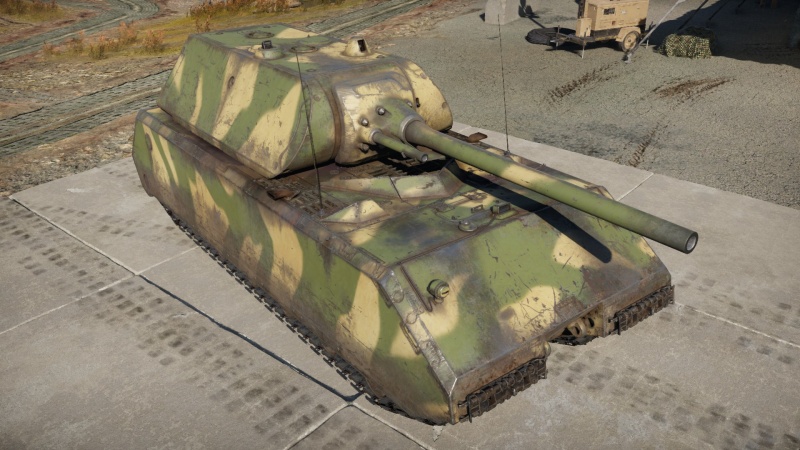 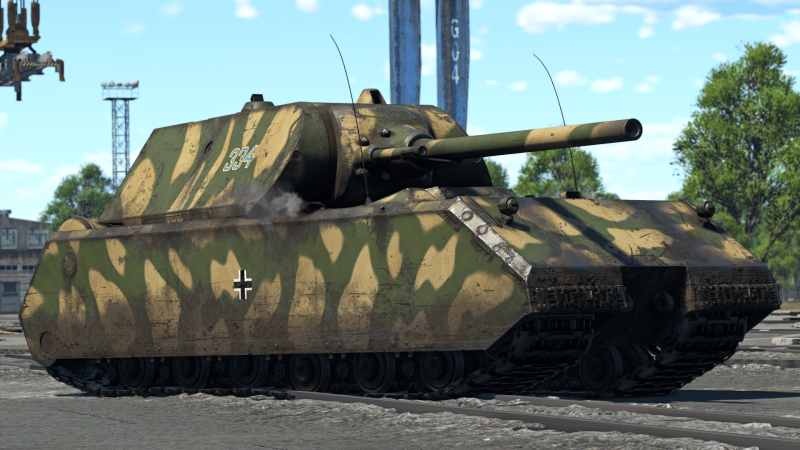 The Pz.Kpfw. VIII Maus is a rank V German heavy tank with a battle rating of 8.0 (AB) and 7.7 (RB/SB). It was introduced in Update 1.47 "Big Guns" as a main tree vehicle, however in Update 1.91 "Night Vision" it was shifted to become a gift vehicle for players who previously owned it. It was later reopened to research for a limited time during War Thunder's 8th, 9th and 10th anniversary events. The Maus is the definitive tank of heavy armour in Rank V and is one of the largest ground vehicles in-game. The Maus can be a menace in the battlefield and conversely also a bullet magnet, a double-edged sword that must be played correctly or else fall victim to heavy enemy fire.

The Maus lives up to its reputation as a mobile bunker. The dual guns do great damage, however, against high-rank tanks it is best to use the 128 mm main gun. It is important to protect the back armour on the Maus and to make sure it does not get outflanked. Preferable used at long range and choke points. Best used as an armoured beast able to destroy vehicles and take any shot.

The 128 mm KwK44 is a great gun in-game, very accurate and perfect for mid to long range engagements. The reload is very good too for its calibre (23 seconds stock) that is a big advantage against IS-4s, because the Maus has three seconds for an extra shot. It has one of the best penetration value of any APCBC shell in-game alongside the IS-7 and the Object 279. However, the APCR and HEAT shells of the T-54 and late US vehicles surpass it. Damage-wise the 128 mm PzGr.43 is equivalent to the shell BR-471 of the 122 mm D-25T cannon, for which penetration usually means a knock-out.

Coaxial MG? That's for normal tanks (but it is there anyway). On the Maus, everything is bigger. The short 75 mounted alongside the main 128 originally served as anti-infantry and soft target weapon of choice. In War Thunder, these vehicle types are either not found on the battlefield or as latter only on certain maps. It comes without question that the 75 mm should be used against AAA, trucks and SPAA. However, the HEAT shell can be used to harass the enemy, lure them out/in of cover, or just damage medium tank's sides (T-54 and M46 do not exceed 80 mm of armour) tracks and even destroy some lightly-armoured vehicles with overpresssure such as the BMP 1. In addition, the secondary cannon has a good reload rate of around 5 sec, thus it can be used to defeat light tanks and SPAA without wasting the precious 128 mm ammo for more heavily armoured targets.

Versus heavy tanks, the Maus has all the advantages. While slower it can make up for this in close combat thanks to the good turn rate of both tracks and turret. Just quickly angle the Maus (both turret and hull) and you will turn it nearly invincible (be advised that HEAT shells can still penetrate the angled turret). Try angling the front drive wheel at the enemy tank and turn the turret so that the armour is at ~45 degrees to the enemy fire. The tanks that pose a threat are the M103, the M48, the Chinese T-62, the BMPs, the Object 120, and basically every tank that has HEATFS, ATGM, or APFSDS rounds that can penetrate more than 320 mm of armour. One good strategy is to capture the objective and just defend it. This can be really helpful to the team.

Versus medium tanks, the Panzerkampfwagen VIII can fight in CQC with its decent turret rotation but at the cost of exposing its side armour and getting flanked. Doing so should be kept as one's last resort. Distance is the ally of the Maus, which should be easy to do considering that the top speed is 20 km/h.

While it is very strong frontally because of its excellent armour, the Maus should be played very carefully: it can be very vulnerable if it gets uptiered where enemies have APFSDS rounds and ATGMs that will go clean through your armour. Try to stay out of close quarters as it will be easier for tanks to take out your gun barrel or move to your sides.

The prototype used Ferdinand's "electric transmission" that was previously used on the rejected Tiger(P), the vehicle would be powered by an MB 517 diesel engine. The Maus has a suspension design with 24 wheels on each side, 2 per bogie with two bogies side by side and six bogies lining up from front and back. The armour was perhaps the most defining feature at 220 mm thick at the hull front, the sides and rear were 190 mm thick. The turret was even thicker at 240 mm on the front and 200 mm on the sides and rear. The vehicle was to also have a 128 mm KwK44 main gun with a 75 mm KwK44 gun as a coaxial. The overwhelming design was approximated to weight 100 tons.

The production plan was to have the prototype completed by mid-1943 and for 10 vehicles per month after the prototype delivery. Work would be divided between Krupp and Alkett for the production of the machine. The wooden model of the tank was presented on May 1943 to Hitler. It was then approved for production and 150 of them were to be built. With the final design finished, it was estimated to weight 188 tons now. Though Hitler and his peers saw it with much favour, Heinz Guderian criticised the Maus design because there was a lack of machine guns, thus it was extremely vulnerable to infantry attacks at close-quarters for the same reason as the Ferdinand tank destroyer. The anti-infantry problem was solved with the addition of a coaxial machine gun and a "Nahverteidigungswaffe" dischargers, firing smoke or high-explosive shells in its surrounding area, installed on the turret.

However, the Maus was never fully produced because it was the only tank that ceased production because of a strategic bombing campaign that would ruin its production facilities. Adding to this, by 1944, the Red Army was advancing deeper and deeper into what was previously German-controlled territory. The vision that the Red Army might capture the testing grounds of the Maus prototypes and the prototypes themselves seem to come closer to reality. The Germans were forced to destroy the prototypes to prevent their capture by the Soviets, placing charges onto the V2 prototype (the V1 was only a hull so it wasn't combat-effective). The second prototype had the entire hull damaged as there was ammunition still in the tank when the charges went off, but the turret was mostly intact. The Soviets captured the damaged prototypes and held them until the end of the war. After World War II, the Soviet Commander of Armoured and Mechanized troops ordered for the V1 hull to be attached with the turret from the V2 prototype. They had to use six Sd.Kfz. 9, the largest half-track vehicles produced by Germany, to move the 55-ton turret to the hull. The fixed prototype was sent back to the Soviet Union for testing and arrive on May 4, 1946. Once this is done, the prototype was sent to Kubinka Tank museum in Russia where it lays today on display for the public.