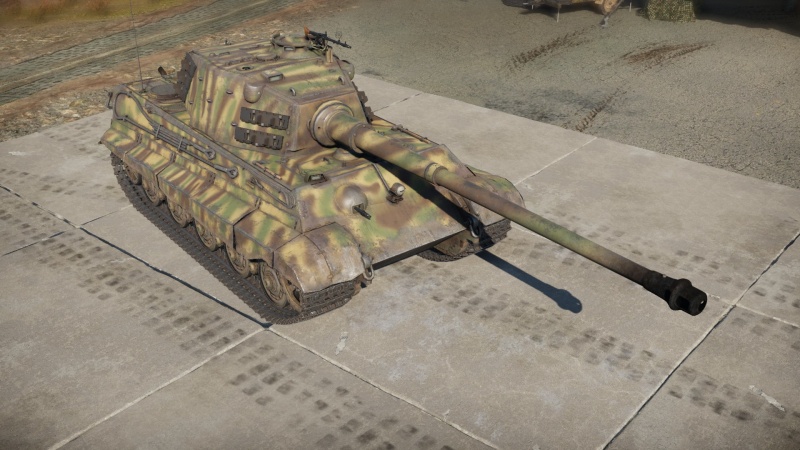 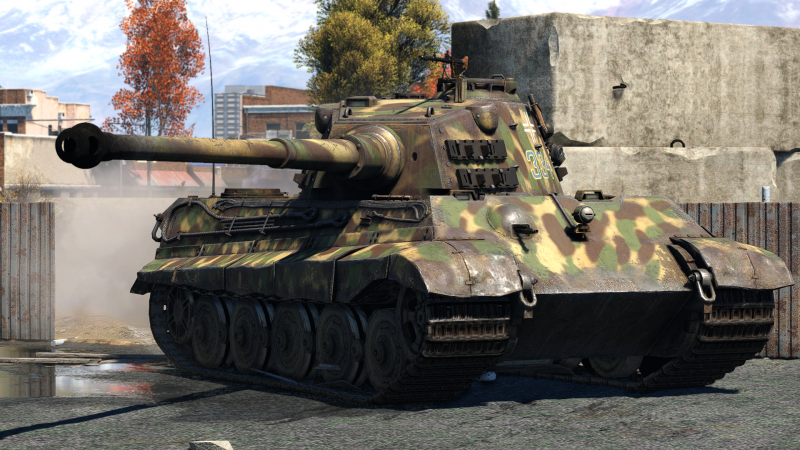 The Pz.Kpfw. VI Ausf. B mit 10.5cm KwK L/68 (Sd.Kfz. Index: Sd.Kfz. 182) is a rank V German heavy tank with a battle rating of 7.0 (AB) and 6.7 (RB/SB). It was introduced to the main tree during the Closed Beta Test for Ground Forces before Update 1.41 as a main tree vehicle, however, as of Update 1.91 "Night Vision" it was shifted to become a gift vehicle for players who previously owned it. Increasing Tiger II's main cannon to a whopping 10.5 cm cannon, the Tiger II (10.5 cm Kw.K) boasts a much more powerful armament than any of the preceding German heavy tanks.

The armour on this variant is the same as on the regular Tiger II (H). The upper front plate provides excellent protection against any regular AP (APCBC, APHE etc.) shell you might face. The turret, however, is only 185 mm and easily penetrated by most enemies, but you can make it very difficult to hit by "wiggling" the turret left and right which will often result in bounces or non-pens. The lower glacis is a weak spot but the transmission right behind it often takes most of the shrapnel, it can catch fire pretty easily though, meaning researching FPE should be done as soon as possible. 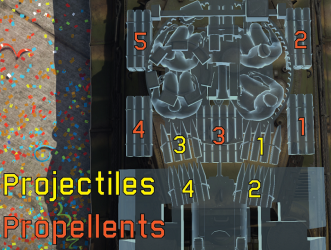 This tank's best role is as a sniper/support tank. Stay at distance, or your reload time and mobility will be the death of you.

Use your mobility to reach sniping zones and wait for enemy tanks to show up. Keep your distance to maximize the effectiveness of your armour and use cover to reload without having to worry about being destroyed. Avoid close combat as much as possible since most of the other tanks at your battle rate can penetrate your armour very easily and your reload rate is 20 secs so if your shot doesn't penetrate you will be easily killed.

The Tiger II with its 8.8 cm KwK 43 cannon was one of the most formidable tanks in World War II. Its 150 mm thick front armour plate sloped was never penetrated by an Allied tank throughout the war and its cannon could destroy any Allied tank fielded in the war. However, some German higher-ups believe that the armament on the Tiger II was just not enough, something more was needed.

Ideas of rearming the Tiger II was brought up by Krupp in sometime in late 1944. The concept drawing Krupp made was for the Tiger II to be rearmed with a 10.5 cm KwK L/68 cannon. This design would require new mountings and new mechanical parts to be optimized for the larger 10.5 cm gun. While the idea was indeed a very interesting one to up gun the Tiger II, it was never implemented because of its drawbacks. The 10.5 gun uses two-piece ammunition, which requires the presence of another loader. This is impossible because the turret is already cramped as is with three people inside, and the addition of another will make the interior a very miserable place to be in. Plus, the fact the gun's ammunition is two-piece already means that the drawback behind this upgrade is a much slower fire rate. This causes the concept to be rejected by German high command, and if it wasn't, it certainly ended with Germany's surrender in May 1945.