Difference between revisions of "Chieftain Mk 5" 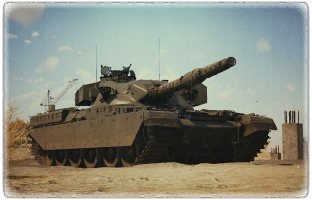 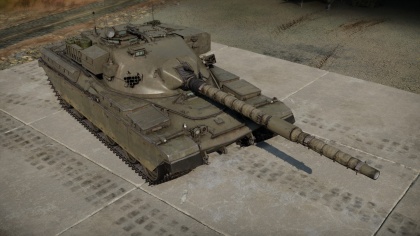 The Chieftain Mk 5 is a rank VI British medium tank with a battle rating of 8.7 (AB/RB/SB). It was introduced in Update 1.69 "Regia Aeronautica". The Chieftain Mk.5 carries over its strength from the Mk.3 variant, but with a more powerful engine for improved mobility.

Ammo racks of the Chieftain Mk 5.

An aggressive way to play:
The best clients are the German "Leopards" and all the Russian series "T-xx". Shoot it on front frame, where the shells are, for an assured popcorn effect. Don’t hesitate to try this on IS-3/4 or T-26/28/29, only shell place change (front side or turret rear).

The first upgrades to head for is Parts and FPE for increased survivability. Once these two are unlocked, everything is good, but get the rangefinder for enhanced RB or SB gameplay.

As the FV4201 finalized its prototype stages, General Staff sent a revised specification for it. The tank was to have the firepower of the Conqueror with the mobility of the Centurion, an armour that maximizes the protection-weight ratio, a weight limit at 45 ton with a top speed of 26 mph and an operating range of 300 miles. The first wooden prototype was made in March 1959, with full prototypes ordered in June 1959 for troop trials. Vickers-Armstrong and Royal Ordnance Factory shared the manufacturing process and the first prototypes were built in January 1960. The first two prototype FV4201 was trialled in Germany alongside their new Leopard 1. The greatest issue with the FV4201 was the engine, which caused many failures due to vibration, a result of the flawed multi-fuel concept. Trials were delayed due to lack of parts to fix broken pieces and redesigns were requested to fix problems. After a lengthy trial period in 1962, the FV4201, now named the Chieftain, was sent to the operational unit in Germany for service and combat trials. The Chieftain was finally accepted for service in 1st May 1963, despite the many faults in the design. The first deliveries of the improved and redesigned Chieftains began in mid-1965. These were the Chieftain Mk.1's, which further revealed problems with the horsepower that the Mk.2 was designed and sent in April 1966. The Chieftain Mk 3 rolled out of the production lines in September 1969, it now weighed 53 tons and the L60 engine was producing 650 hp, still underpowered for the weight. Engine failures were still frequent and left the Chieftain with a sour note until the Mk.5 variant fixed these pressing issues with a new engine and NBC protection. The Mk.5 would be the main variant of the Chieftain in British service. During its production life from 1965 to 1985, a total of 2,265 Chieftains would be built by Britain, with about 1,000 used by the British Army.[1]