The Type 1 Chi-He (一式中戦車 「チへ」) was an improved version of the Type 97 Chi-Ha medium tanks of the Imperial Japanese Army in World War II. It uses the same anti-tank gun as the Chi-Ha Kai and boasted an upgraded engine and thicker armour. It was the first Japanese tank to have a communication radio as standard equipment.

While the new Chi-Ha Kai redesign was underway, the development of its new 47mm high-velocity gun and the new turret design would prompt a new tank on the side of development.

The new tank would go under the name of Chi-He, and the turret design would directly be used on the Chi-He. By 1941 both the tank and 47mm would be adopted within the army and were given the designation of Type 1 (47 mm) and Type 1 Chi-He.

While the Chi-He looks very similar to the Chi-Ha, it has been simplified in design while being an upgrade at large with the changes being:

On testing of the Chi-Ha vs Chi-He, a 15cm heavy howitzer would be used on both tanks where the Chi-Ha would pretty much fall apart, unlike the Chi-He that would allegedly still withstand the blast. Although it was an improvement over the Chi-Ha in most regards, it would come a little too late as it was already dated for a 1941 tank, which would be produced even later than that which didn't allow it to see frontline combat and would be held back for homeland defence. 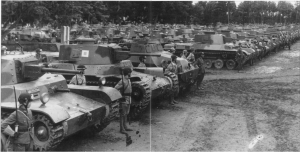 A total of 170 Chi-He's were produced, including prototypes (with an unconfirmed total of 587).

Americans first reported the new Chi-He during the Battle of Luzon, Philipines. But as they successfully engaged with the tanks and came for a closer inspection, it was simply the Chi-Ha Kai.

All of the Type 1 Chi-He's were allocated to the Japanese home islands to defend against the projected Allied Invasion and never saw combat. Despite the Chi-He's superiority in terms of armour and firepower over the earlier Type 97 Chi-Ha, it still underperformed against the American M4 Sherman, leading to a new design known as the Type 3 Chi-Nu.