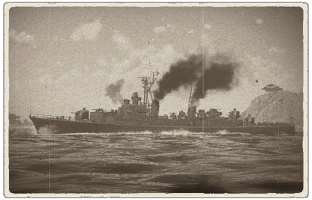 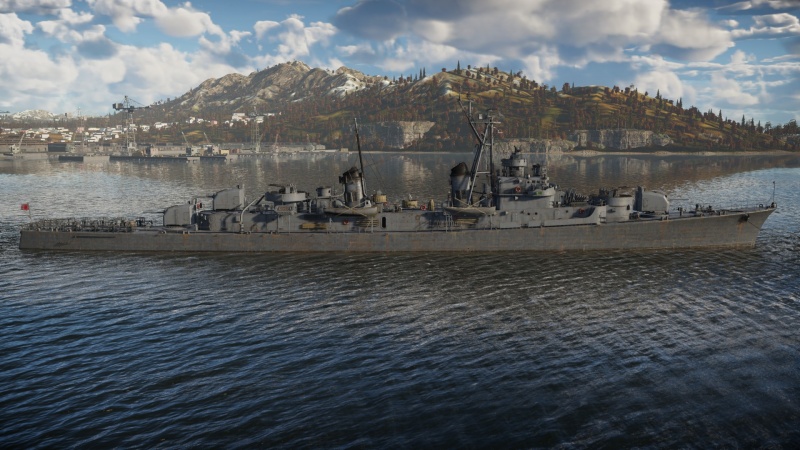 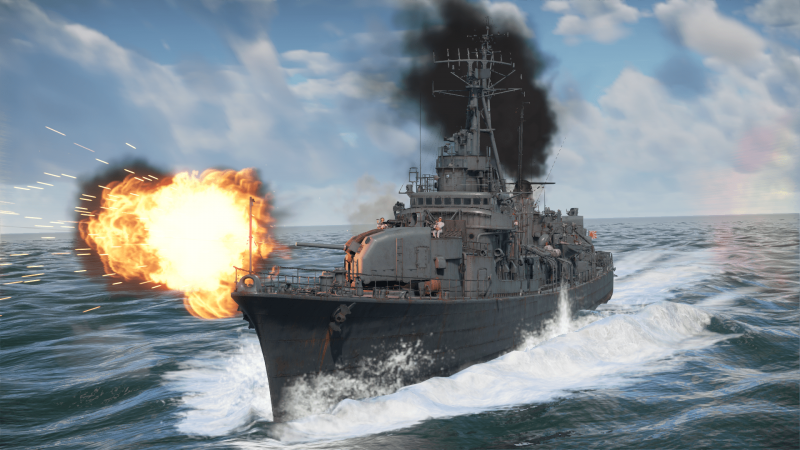 The Harukaze-class, JDS Harukaze (DD 101), 1956 (はるかぜ, namesake: Spring Wind) is a rank II Japanese destroyer with a battle rating of 4.0 (AB/RB/SB). It was introduced in Update "Winged Lions".

The first destroyer class made in Japan after WW2, the JDS Harukaze resembles American destroyers more than its IJN predecessors. It is armed with 3 fast-firing single 127 mm guns with a variety of shells, including HE-VT to take down aircraft, which is also added to with a good AA battery of 2 quad-mount 40 mm Bofors cannons. However, Harukaze lacks torpedoes of any kind, which prevents it from reliably taking down large ships. Compared to other destroyers, Harukaze is relatively slow, having a max speed of only 56 km/h. In many ways, Harukaze is like a larger version of the JDS frigates Akebono and Ikazuchi, having fast-firing dual-purpose guns, a somewhat slow speed, and a secondary armament of only depth charges.

The Harukaze is more akin to a frigate in terms of survivability, it's a rather small package of a ship with a total crew of 240 men on board. But due to the little amount of fighting compartments, damage above the waterline will only whittle down gun crews which aren't much to begin with. All critical components are beneath the waterline and will be safe from HE.

Lacking speed in comparison to other destroyers due to the difference of role, while most destroyers are general purpose destroyers for open sea, the Harukaze was built for ASW and coastal defense and this reflects in her top speed of 30 kn.

As all ships, to keep the ship afloat tools to repair and extinguish fires are crucial, then consider what shells are needed for the task as the next research, considering the soft targets the Harukaze usually meets, high penetration isn't required and more HE filler would suffice. Afterwards, it's up to the captain if HE-VT is wished for if the 2 quad Bofors don't fall into taste. Everything else can be ground out in leisure.

The Harukaze will move away from the Japanese playstyle of torpedo-centric doctrine, even more so since the Harukaze doesn't even have a single torpedo launch tube. Equipped with American 5-inchers, she will have a much stronger gunplay compared to IJN ships due to lightweight shells, quick-loading breaches and AP shells. This does mean she lays closer to playstyle to US Navy ships, but only comes with 3 single-cannon turrets.

Equipped with 2 quad turrets in the front and back of the ship, both Bofors mounts have excellent angles to engage targets and pour out enough lead to deal considerable damage to heavier coastal vessels and destroyers alike within close range. The quad mounts also will be effective at taking out pilots who aren't careful enough at medium range.

The Hedgehog mortars are fixed on the ship, pointing forward and thus makes it hard to utilize it to its fullest potential. The best way to use them would require you to go straight at an enemy ship, before launching the mortars. However, the range on the mortars is not very good either, making it hard to land hits on your enemies without receiving damage.

While the cannon count on the Harukaze is inferior to her IJN counterparts which come with an equal amount of turrets but double the cannons, the Harukaze compensates for it by offering SAP and Common shells on top of her excellent fire rate which surpasses the damage you can deal with the Japanese 127 mm/50 3rd Year Type within the same time frame, especially target switching will shine compared to IJN destroyers with the lighter turrets having a much faster traverse speed due to superior electronics.

Additionally, the Harukaze comes with radar and an advanced fire director which allows easy tracking and engagement of aerial targets and quicker rangefinding of naval targets all squeezed into a single tight package which new captains may need to be wary off when their ship is stock, leaving little additional armament if any gun would be knocked out. 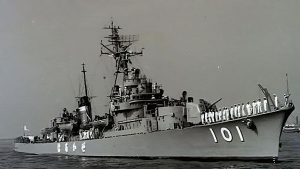 The JDS Harukaze during a ceremony.

JDS Harukaze (はるかぜ, namesake: Spring Wind) was the lead ship of the Harukaze-class and the first domestically built ship after the war. The main design purpose of the Harukaze, like all Japanese post-war vessels, is coastal defence and ASW focus in defence of Japanese waters.

Inspired by ships from the war, the Harukaze-class mainly took design advantage from the USS Gearing-class in overall construction and equipment, with traverse taken from Imperial Japanese designs; Shirayatsuyu- and Asashio-class.

While laid down at the Mitsubishi shipyard in Nagasaki on 15 December 1954 with hull pennant DD-101, outfitted equipment was mostly if not all supplied by the United States according to the US and Japan Mutual Defense Assistance Agreement. Harukaze (DD-101) and her sister ship Yukikaze (DD-102) both were built with the main role of anti-submarine warfare (ASW).

Harukaze mainly served and moved around under the 1st, 2nd, and 12th escort groups as flagship. She also took part in the first two pelagic training voyages to Hawaii. She would see multiple refits ranging from upgraded sonar, alternative fire director, and other electronic warfare updates.

From 1981, Harukaze would be reclassified into a training auxiliary ship and her hull pennant switched to ASU-7002. After her last service in 1985, she was moored and stored at the Maritime Self-Defense Force 1st Service School at a special pier up until November 2001, when she was sold due to significant damage caused by salt and dismantled on the 19th of the same month.